If I were to die and go to a gluten-free heaven, it would be Portland. Now, I’ve never been there before this past week, so I just assumed that everyone would be some crazy hippy that would “put a bird on it.” However, everyone there is super nice, and super gluten-free friendly. I’m here to tell you about a few highlights of my trip!

First up: Getting there!

We started our day of travel off with the swordfish tacos at my favorite, Chelsea’s Kitchen in Phoenix. They make their own corn tortillas there and have the best kale salad I’ve ever had. It’s my happy place, and it makes me less stressed to have a full meal before I travel so I don’t have to worry about eating on the road.

Like every good celiac, I brought about a thousand snacks for the entire trip. However, I didn’t pack anything sweet on my carry on for the flight and I was craving a cookie. Finding a gluten-free cookie in an airpot is seriously impossible, so I went to the shop to see if I could find anything to eat – and I did! They have a little “healthy” section that includes gluten-free food (like Pop Chips, Pure Bars, etc.). I found a Pure Bar chocolate brownie that I was stoked about. It was a great snack and not overly sweet and pretty good for you (c’mon, it’s organic). It deserved a quick review of 4 out of 5. It’s not sweet like a brownie, but still a good and natural snack when you’ve got a “case of the sugars.” 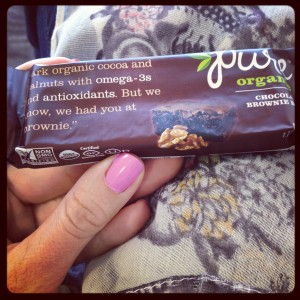 I found it on Gluten Free Portland on their recommended restaurant list. The owner is a Celiac, so clearly I felt safe taking the whole crew there. By the way, not only was I taking Non-GFBF there, but also his brother and sister-in-law (who are nice enough to show us around and show some Portland hospitality). They have great eating habits and are awesome, but aren’t completely GF. So, like any time I take a non-Celiac places that have GF dishes, I was worried the food might be crap. I couldn’t be more wrong. Not only did they have the biggest selection of gluten-free food, but they had a huge selection of gluten-free beer. I could eat here every day.

Here’s some highlights on why I love this place so much: 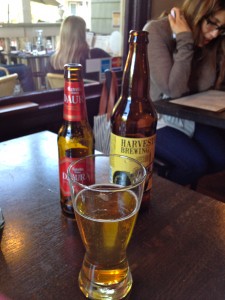 So on top of Green’s (yum, my favorite) they also offered Omission, Harvester Brewing gluten-free beers (all four varieties), and Estrella Daura.

Gluten-free mac and cheese? Don’t mind if I do! God this was good. It was made with corn pasta from Sam Mills. But the sauce and the cheese and the chicken made it sing. It was a smaller plate than I imagined – and I should have had a sandwich on top, but I just stole food off of Non-GFBF’s plate.

He had the Banh Mi with great grilled pork on gluten-free bread. Although he was bummed that it didn’t have the traditional banh mi bread, but it was a great sandwich. It came with gluten-free fries (they only fry GF food in the fryer). He also had the Harvester Brewing beer that was pretty decent! He really liked his ale and was happy with his beer selection and I was happy to support a local Oregon business that believed in gluten-free brewing.

For dessert we had the apple fritters. They were great and so was the caramel and ice cream! Their dessert menu isn’t currently online, but it’s awesome too.

The atmosphere is a bar – so it’s going to be loud and crazy, especially at night when the Timbers play. But the service is great and everyone seemed pretty friendly.

If you are a Celiac, or gluten-sensitive champion, then you simply must but Northwest Public House on your list of to-do places in Portland.

I think after a visit here you’ll be tempted to eat every meal, but don’t. There are so many good places to eat, you will find something else that rules – and we’ll talk about that in the reviews to come…