Food and Beverage, ReviewJuly 1, 2012No comments

Time for the 4th installment of my ode to Portland, OR. In the first act, I talked about Northwest Public House. Then we journeyed to Crave Bake Shop and then Hopworks in my 3rd piece. Next up, an asian restaurant in Sellwood – Jade Tea House & Patisserie.

Since I don’t know what a Patisserie is, I’m just going to call this place Jade Tea House. Upon further inspection, it’s apparently a type of French or Belgium bakery. Oh, okay. Well, did they have gluten-free macaroons, and a gnarly (in a good way) sesame ball that was gluten-free, so forget about the bread non-sense. But they have gluten-free french fries, so that’s cool. 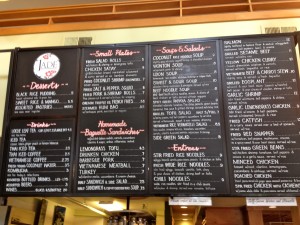 The owner was really nice, and was willing to walk us through the menu and tell us what we could eat and what we couldn’t. He actually told us that most of the menu was gluten-free or could be made gluten-free.   You definitely need to have a discussion with the person that takes your order, as nothing is marked as GF on the menu. Everything we ordered was gluten-free, and we ordered a ton (see below pics). 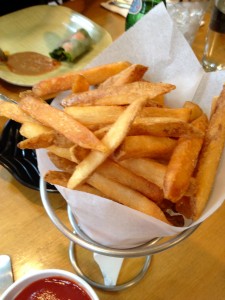 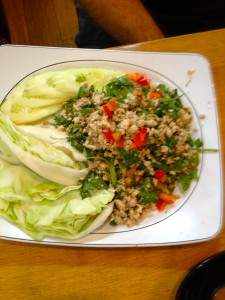 The appetizers were really great! I’m putting the minced chicken in with the apps because it was a great dish to share. It was so fresh, really packed full of cilantro, and just yummy. The salad rolls were so fresh and so tasty. And the fries, well….random that they have fries at an asian fusion restaurant, but they’re made with truffle oil, how could you turn them down! 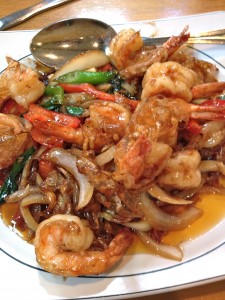 Here’s my biggest gripe about Jade Tea House (besides Non-GFBF’s food, which I thought was yucky and tasted like spaghetti, but he liked it, so maybe don’t trust my capacity to love anything called “chili noodles”) – its the shrimp’s skin! Listen, I know what a shrimp looks like in the wild. I understand that they’re gross looking and have gross little legs that help them swim about. However, when I have it on my plate, I don’t want to be reminded of how they look au naturel. It reminds me of finding cicada shells on our trees as a kid (maybe that’s only an Arizona thing). It was really unappetizing to see – especially since the meal was SO good. I pushed past my level of fullness just to eat it all. So. Good. 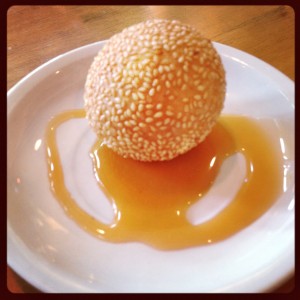 This was also another great thing – a sesame ball dessert that tasted more like a doughnut than anything. Kudos!

I can’t really judge the last two photos – Non-GFBF’s chili noodles and NGFBF’s brother’s beef pho. I don’t eat beef, so forget about trying it. However, he was raving about it, and even took the extras (do you SEE how big that bowl is?) home. Non-GFBF’s dish, however, was just not at all what I like. Then again, I would never order chili anything. I thought it tasted like spicy spaghetti sauce. He thought it was good, but he wanted to see more shrimp. So, order that at your own discretion! 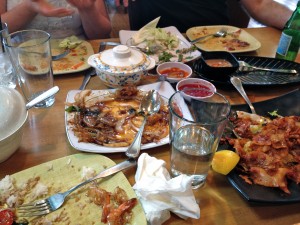 We rocked our plates at the Jade Tea House. Because of their friendly attitudes and welcoming nature, as well as an awesome menu in a casual environment on a cool street, I’m giving this place a 5. Again, if I lived in Lake Oswego or Sellwood, they would know me by my face quickly.

If you’re on Find Me Gluten Free, follow this link to their review site.