Food and Beverage, ReviewJuly 4, 2012No comments

I’ve been to Seattle a million times (or like 6), and every time I’ve contemplated going to Wild Ginger. It’s got a great location – close(ish) to the water downtown in main pedestrian walkways. It’s also very allergy friendly – as Seattle Weekly pointed out – they ask you about food allergies when you order. Exploring more, I found several other blogs that mentioned that Wild Ginger was very gluten-free-friendly – like You, Me, & Gluten-Free.

The waitress was really nice, but didn’t know what was 100% gluten-free or not. She had to keep running back and forth to the chef to assure that she could make whatever dish I wanted gluten free. I didn’t really mind that though, because it showed that she really cared about making me a safe dish. It’s not like she wasn’t educated on her own menu, but she wanted to assure that I had a good experience. Since they could make almost anything (except wheat noodles – they’re not magicians) gluten-free, we were overwhelmed by the extensive menu. We ordered a few things that we thought would taste pretty okay, and just waited to see what came out!

Non-GFBF had a rum runner off the special drink menu and hated it. it tasted like cough syrup. However, I had the coconut martini (the name escapes me now). it was delicious! They apparently have a very extensive wine list as well, but I wanted something specially-made at Wild Ginger. I wasn’t overjoyed at the cocktail menu, but that’s not why we were there. However, definitely get the coconut martini!

I found it interesting that one of the most expensive things that we ordered was our appetizer. I don’t even think we noticed how expensive the Siam Lettuce Cups were when we ordered it. It was $17 for this. Granted, it was ah-mah-zing. The flavors were so fresh and so crisp. The lime juice and the cucumber and the basil. I thought that a ball of grilled fish would be super gross, and I was really hesitant when it came to our table. But it was so good. Wrapped in butter lettuce, it’s one of the best “wrap” appetizers I’ve ever had. I’m not sure I can have a PF Chang’s lettuce wrap after eating this. 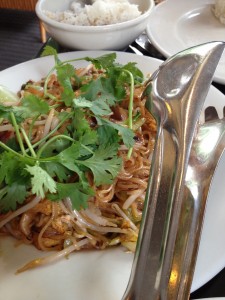 We were initially discouraged from getting the pad thai. The waitress recommended that we order something that we couldn’t find at other restaurants. Well, we proved her wrong. This pad thai was some of the best I’ve ever had (although our Wild Thaiger in Phoenix could rival it from what I remember). I would definitely recommend this one to future diners. 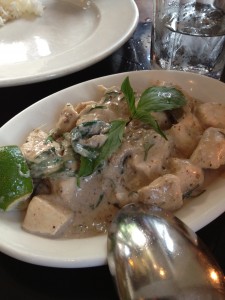 The green curry was good, don’t get me wrong. However, I just thought it would be better – seeing as how the other two dishes were just awesome. Although I would eat this again, and for $12 it’s pretty comparable with other green curry dishes I had. 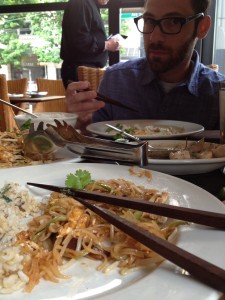 We ordered way too much food. They actually recommended an appetizer and satays and two entrees – since it’s family style. I don’t know who they are feeding, but I could not eat any more food! Good lord, so much food for two people. This is great when you’re eating as a large group and can take some from every dish – family style, but for two people, make sure to tone down your order. 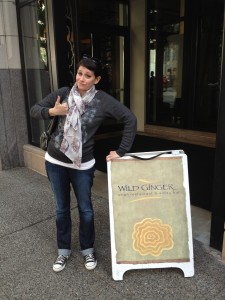 So, Wild Ginger earns two thumbs up for me, but only 4 wheat stalks. It is expensive ($70+ for two entrees, an app, and two drinks), and the green curry was nothing to write home about. Non-GFBF’s rum runner drink was awful, but my coconut martini was brilliant. The Siam lettuce cups and pad thai were seriously amazing. I think you’ve got to splurge on Wild Ginger just once. If I lived there, I would put it in my rotation, but would probably split a dish and high priced appetizers.

You can find other reviews of Wild Ginger on Find Me Gluten Free here.