Love Beanfields – especially their Pico de Gallo flavor, and love that they’re corn-free and vegan! What’s new? They just launched a low-sugar Barbecue and a vegan Ranch. I love love love the Ranch and can’t wait until these hit the shelves! 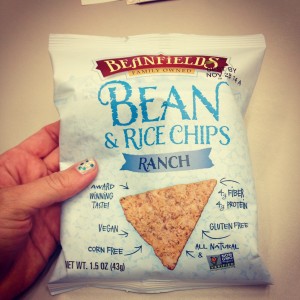 I was expecting these new chips to be an explosion of flavor – but these two new chips are actually more subdued than their other flavors. Their Sriracha flavor has a bit of a kick, but not as intense or sweet as their Sweet Chili flavor. Their mustard onion flavor is very subdued but ends with a very tangy taste of mustard. I went in assuming that my Sriracha chips would win my heart but I’m so excited about the onion mustard flavor! 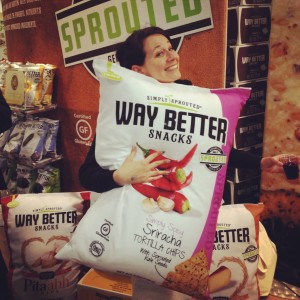 I Love My Way Better Snacks

My girlfriend from The Frux joined us at their launch party and also fell in love with the mustard onion flavor! Did I mentioned these bad boys are vegan too? 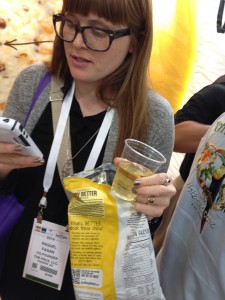 Another The Frux favorite as well – Mary’s Gone Crackers Everything Pretzels are awesome. Now, take this from someone who wrote off Mary’s Gone Crackers’ crackers and pretzels (yes, all of them) – I just didn’t like their flavors. However, this everything flavor tastes like a bagel – garlic onion pepper – I dig it. Also, Mary’s Gone Crackers just did a major revamp of their brand. I say major kudos on the new logo and packaging! 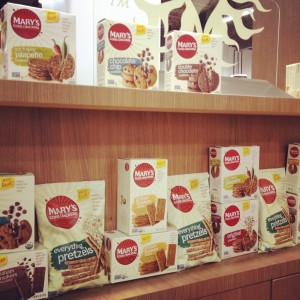 So how does one do vegan bacon? Phoney Baloney’s makes legitimate-bacon-tasting-coconut-flakes. Yes, you can now make vegan maple bacon donuts and cupcakes. They use a smoke flavoring that’s as natural as you can get to master the faux bacon taste. They also have several flavors (including candied bacon) – but I’m an all-natural girl. Believe me, this company is going to blow up. All vegans need this, especially those that crave the bacon taste without all the pig murder. 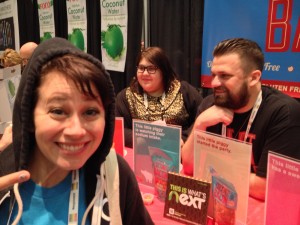 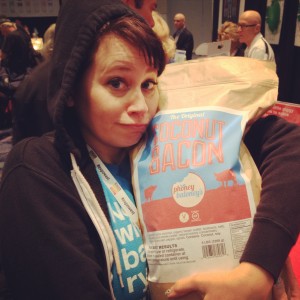 How did they get the coconut to taste like bacon fat???

Sure, there are other dairy-full gluten-free lasagnas on the market, but they’re not from Udi’s, and they’re not as spectacular as Udi’s newest frozen entrée line. My trial was a valid reason to use some dairy enzymes and cheat on my no-cow-products-policy. The combo of spinach and kale, as well as multiple kinds of cheese make this a delicious addition to your freezer. Udi’s also has an entire new line of frozen entrees in addition to this one that will hit the market soon including macaroni with bacon! 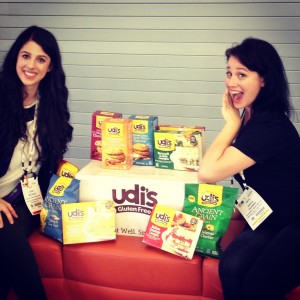 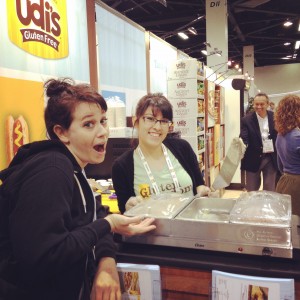 Let’s face it, I’m far too lazy to make cauliflower pizza crust for the insane amount of times I eat gluten-free pizza in one week. I was excited to see Absolutely Gluten-Free’s newest frozen entry into the pizza market place – a vegetable pizza crust. At first I was excited, but I couldn’t really nom as much as I wanted to, as it was coated with mozzarella. However, they also released a non-dairy mozzarella “style” toping one as well! These babies are brand-spankin’ new even the COO didn’t get to try it before I had one of their first samples! Each pizza is only 45 calories – although I could eat about 10 in one sitting. Three pizzas come in one box. I have no idea when they hit the mainstream, but I’m so incredibly excited for them to come out to the general market. 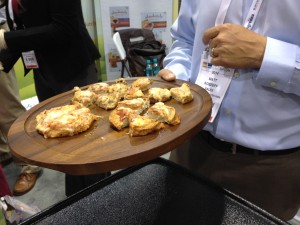 This pizza makes me want to move to Canada. Comensali Gluten Free Foods makes a ton of gluten-free product, but this vegan gluten-free pizza has to be the crown jewel. When will this be released to the US? Well maybe if we cross our fingers and toes and wish real hard, it will come soon – because if not, I have no idea how I can taste this again! This is certified by the GFCP – the GF certification program of Canada. I trust my Canadians, I trust this pizza, and I want it again…soon. Two hungry thumbs up for this pizza. 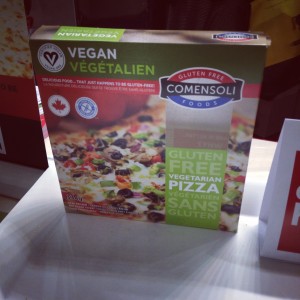 I love it when Pacific Foods launches food that’s gluten-free because 1) it’s hearty and healthy 2) it comes in an easy-to-open tetrapack and 3) you can find it at most retailers. This vegetable quinoa soup hit the spot like a good hearty vegetable soup should – this one packed with protein with quinoa. Lots of new launches from Pacific Foods coming up – especially for our vegan friends. Look to them for consistent product roll-outs! 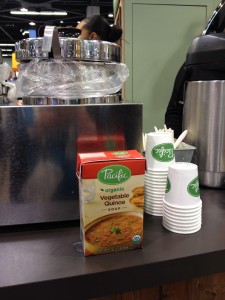