Why Do I Need a Celiac Diagnosis?

I always get the question “why do I need a celiac diagnosis?” This is usually because people think because non-celiac gluten sensitivity (now called non-celiac wheat sensitivity) and a celiac both eat the same diet, that they are the same condition. Why bother with all the tests if you eat the same anyways? Because celiac is some serious shit. It’s the difference between my lactose intolerance and my celiac disease. Because I know that every bite of something made with butter instead of oil can be helped by digestive enzymes and won’t really affect me that horribly. I won’t get cancer from it. I won’t become infertile from it. I won’t have GERD and gastroparesis so bad I’ll throw up on a stranger because of it. I won’t become a raging bitch because of it and turn into the Incredible Hulk. Because it’s an intolerance. It’s not an autoimmune disease. 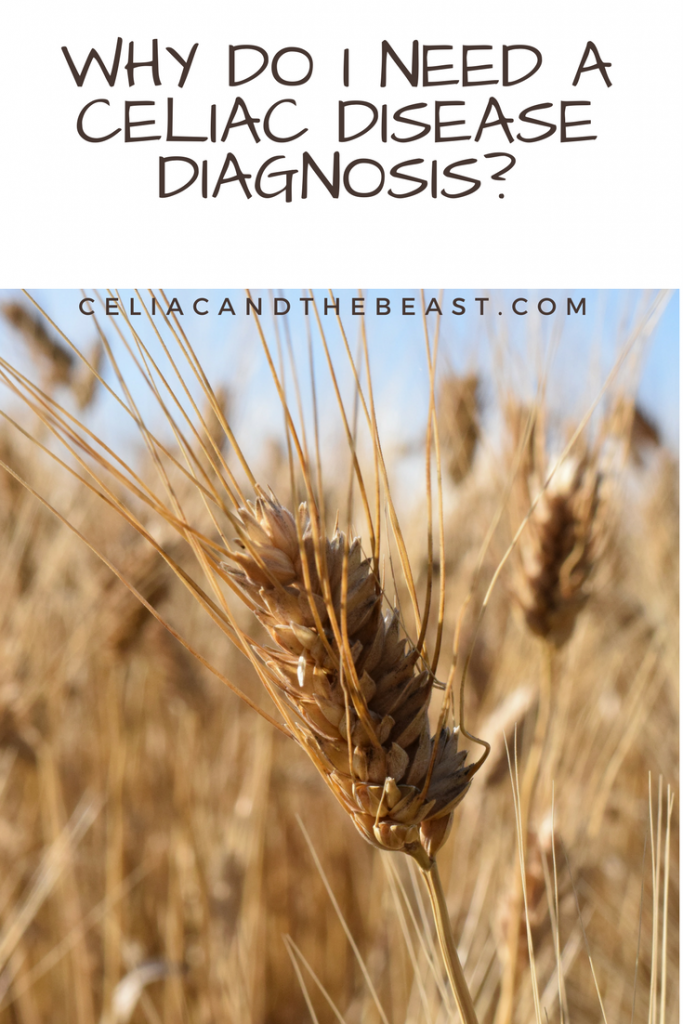 At this point, I’ll get people writing in saying “how dare you!” Yes, I acknowledge that non-celiac gluten intolerance is a very real thing and it’s awful. Yes, we all eat the same, but how we control and take care of the issues because of it are different. I am not calling your issues fake or belittling you. It’s just a different thing.

It’s incredibly important to get a formal diagnosis via an endoscopy after a blood screening test.This is currently a gold standard for diagnosis.

“But a blood test can have a false positive/false negative/equivocal results!”  Yes it can! And way too many people don’t realize that they have to be eating a ton of gluten while having the blood test or else it won’t show anything. My blood tests didn’t really show anything, I had to combine with multiple endoscopies and a blood test along with symptomology to really see if I was celiac. And yes, I had to go back on eating gluten for these endoscopies and blood tests. Back on the thing that gave me rashes and made my mouth an open sore. That made me cry and act like a crazy teen going through hormonal changes. But I did it.

So what if you’re not eating gluten anymore and refuse to be tested? TOUGH COOKIES. Either go on a gluten-containing diet for 6-12 weeks and have an endoscopy or don’t. But if you don’t, there is no gold standard diagnosis without it. You doctor can put together pieces with other information, positive serology, positive genetic test (you don’t need to be eating gluten for that), symptoms while on gluten and probably give you a diagnosis, but this is only if you have a really good GI that has ruled out other things. Celiac is an imitator, you can have a myriad of other issues like Crohn’s, colitis, IBS, a million other things besides celiac. So it’s good to know if this is really it.

But most importantly, in my opinion, is what you do after the diagnosis. It’s really just a starting point once you get diagnosed. You need to have the following follow-up 1) bone density screening 2) nutritional deficiency screening 3) follow-up endoscopy to see if you are healing properly 4) follow-up for additional autoimmune disease. If you don’t have celiac, this isn’t something you need to worry about. But if you do get diagnosed with celiac, it’s important to start healing and make sure you’re healing properly with this follow-up protocol. Celiac ravages your body. Make sure you schedule proper follow-ups, and if need be – get a new doctor who cares about following up with your celiac disease. You have this disease forever, don’t forget about it the second you go on a gluten-free diet.