*Disclosure statement: King Arthur Flour, in their beauty and kindness, sent me a few products of theirs to try out and review. Thanks to them for being supportive of my review blog, and my chocolate habit.*

I think that everyone who is new to Celiac starts off with making GF brownies. It seems like an easy recipe and it reminds us of our childhood – who didn’t make brownies with their mom as a kid? I’ve sampled a ton of brands, and I’ve been sticking with Trader Joe’s packaged brownie mix – mostly because it’s easy to find and I haven’t found anything better. So, I was happy to try the King Arthur Flour gluten-free brownie mix.

We added in pecan halves and chocolate chips – our typical add-ins to brownies. I’m not sure we’ve made just plain brownies in years, perhaps because GF brownies usually need a little something-something extra. 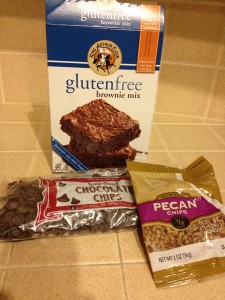 Let’s talk about the consistency. Other mixes that we’ve made seemed “tar”-like (as Non-GFBF said), almost a taffy consistency, too chewy. He thinks that using a handhand mixer instead of using our awesome arm strength and our silicon baking spoons might have been the culprit. I personally think it’s just because it’s a different flour mix than the other mixes we’ve purchased. I don’t know the science behind it, I just know that this feels like a regular brownie. Using chocolate chips made them a bit ooey-gooey (where there were chips), and crunchy (where there were pecan halves), so I personally like the consistency that we created with our add-ins. 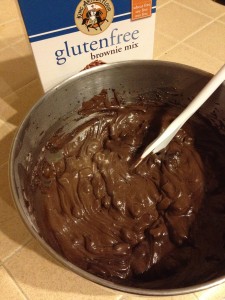 Next, the flavor. Even just tasting the mix off the mixers, the Non-GFBF was blown away by the taste. He asked me (several times) to double check the box to make sure it was actually gluten-free. I think that should speak for itself – this earned the non-celiac seal of approval! It’s such a great rich flavor, I can’t even tell that it’s not full of wheat. These were so good. Seriously, now my top rated brownies. We heart these brownies. 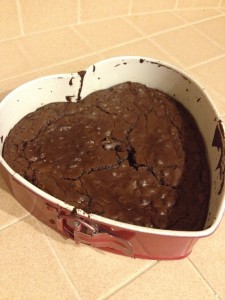 Thankfully this is a great product, because I’m looking to really focus in on mixes that are part of a dedicated facility (these are certified by GFCO/GIG and packed in a dedicated GF facility). I feel safer seeing those phrases on my packaging.

It’s available online through the King Arthur Flour website, but I’ve seen them at natural foods stores as well – as it has a pretty good distribution. It retails around $6 -$7a box, so it’s more expensive than other brownie mixes out there, but you’re definitely buying for flavor and quality.

So here’s where it went downhill. Non-GFBF blames not cooking the brownies long enough. I did not watch him like a hawk while he was baking them (so very unlike me), so I can’t confirm this fact. All I know is that the next day, the tupperware that we put the brownies in now held a bowl full of brownie crumbs. We could no longer discern where each brownie ended or began. We had to eat them with a spoon – not that either of us were shamed by that. I blame the chocolate chips not holding the brownies together, but I could easily blame the boy too. I think next time I would recommend cooking the full time, or a few minutes over to assure that the brownies keep consistency. I would also recommend making sure the brownies cooled completely before storing them in tupperware.

I’m giving this 4.5 wheat stalks – and I think it could probably get a 5 if not for the unfortunate brownie-bowl incident. Next time I will try cooking them longer, and perhaps we can blame the chocolate chips (the ooey-gooey chocolate chips) for the missing 1/2 wheat stalk, but only another attempt will tell. 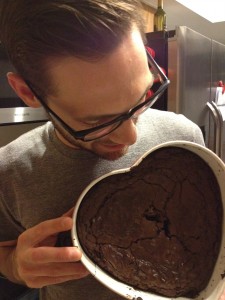 PS here are their “tips for success” that King Arthur Flour put on their website. I probably should have read this before I baked…

Baking times can vary considerably, depending on the pan used.

When done, the brownies’ internal temperature should register 214°F to 218°F on an instant-read thermometer. A toothpick inserted in the center may come out with a few moist crumbs clinging to it; it doesn’t have to be absolutely clean.

Following the directions as written will yield a very fudgy brownie. If you prefer a less fudgy (yet still moist and tender) brownie, substitute 10 tablespoons melted butter + 3 large eggs for the butter or oil, water, and eggs called for. Mix and bake as directed.