Is Gluten Secretly Destroying Your Health on Dr. Oz. You can see parts of the episode here.  There’s 4 parts to this episode available online. He starts by asking “Is gluten your body’s worst enemy?” Well obviously, for me, the answer is yes.

He threw out some great stats about the “gluten-free craze.” Americans spent $6 billion going gluten-free last year. Over 45,000 products labeled gluten-free! Is this just a marketing ploy?  (the answer is no…)

Next he said, “I have the test you must take in order to find if gluten is your body’s worst enemy.” Oh please, God, let this be a biopsy by a GI doc that knows what he’s doing…but it’s a nutritional researcher AND he’s skipping over Celiac (which I guess isn’t the point of the show so, oh well).

The nutritional researcher was talking about over 50 conditions that could come from gluten – anemia, osteoperosis, etc. Then they asked the golden question – why is gluten sensitivities on the increase? Part is increased awareness. Part is hybrids of wheat being developed. There’s over 25,000 varieties of hybrid wheat, and some may have more gluten. Nowadays bread comes from factory, which has more gluten in the final product. You are not born with the gluten issue, can come at any point, but born with the genes that allow it to happen. It takes time with the environment to interact with the genes. Well, at least they explained how the genes work!

Dr. Oz then did a demonstration with how gluten inflames the gut with baking soda. He talked nothing about the villi, but hey – at least he kind of explained about how bad chronically eating gluten can inflame your gut. 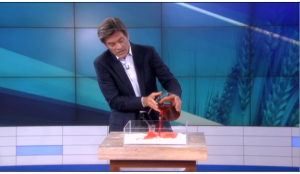 He did talk about the skin symptom and neurological issues of gluten when he was talking about the range of symptoms – which is great.

Next, the nutritional guy talked about the gluten spectrum. He talked about the people that had celiac disease – the 1% that have very bad reactions and damaged internal issues. Then there’s the gluten-sensitive that have equally as bad symptoms but the tests are all negatives. There’s about 1 in 10 people that have those gluten sensitivities. And there’s no test for that (obviously). And then there’s the gluten-friendly – that don’t have any issues (those lucky guys). 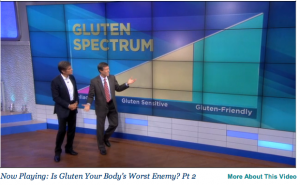 They showed a vignette of Jessica – a gluten sensitive who was diagnosed with eczema, brain fog, constipation, diarrhea, and depression. Then she went gluten-free and life is magical! It was called the “classic” story – being misdiagnosed for years. After they showed her, they introduced a gluten sensitivities self-test! They asked the audience to count how many of these problems you have on a chronic basis:

DO YOU HAVE MORE THAN 4 of those symptoms? When Dr. Oz asked this, a lot of people stood up and he said that they could all be gluten sensitive! Gluten may be impacting on your heath! OH NO! I am very happy that he included the neurological issues in there – especially for those gluten-sensitive people that don’t have a lot of the “typical” reactions to gluten.

So then they go on to the recipes section of it with a blogger that I have no idea who she is- and she really overdoes it with the oats. She’s apparently a no-bake GF blogger – but where are all the gluten-free bloggers that are huge in our community? There’s a million out there, so why is there a no-bake gluten-free blogger? First, she doesn’t mention that oats are often cross-contiminated, and that you have to always choose gluten-free oats! I didn’t know that for the first year and got sick all the time. Also, my doctor told me not to overdo it, even on the gluten-free oats. Her recipes were all about oats – and even made rice-less risotto. Geeze! The greek yogurt cheesecake cups looked good though! 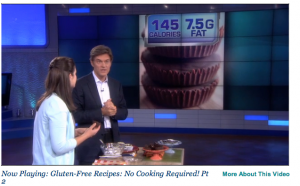 I wished they focused on gluten-free flours and ancient grains in their recipes!

So, I guess it could be helpful for people who have no idea what gluten really is. And for that, I’m thankful to Dr. Oz. But, like usual, they glazed over the topic of Celiac, and when they talked about testing – they didn’t mention endoscopies or blood work or anything. Or going to see a doctor that specializes in gluten sensitivities and Celiac! Sigh. What did you guys think of the show?