Food and Beverage, ReviewJanuary 17, 2013No comments

Thanks for making it to PART TWO of our San Diego posts! Today we’re going to talk all about SEAWORLD! I love SeaWorld and have since I was a kid. I dragged my parents there for family vacations all the time to see Shamu and all the other fun aquatic shenanigans. When I was in high school, my parents let me go to SeaWorld by myself (this is when I was terrified to fly) with my best friends – and we got to swim with the dolphins. It was one of the coolest things I’ve done!

The last time I went to SeaWorld, I was with a coworker in San Diego for a conference. We went on our day off and I realized (with my grown-up adult brain) that SeaWorld was SO expensive! I can’t believe I took for granted all the times I went as a kid and made my parents shell out an absurd amount for Shamu-branded gear and ice cream. But, I still had an awesome time – even as an adult. Since it’s been at least 4 years since that trip, I was itching to go again! Non-GFBF promised me that we would go as part of my birthday present. We had everything planned for a few months ago – but then my knee happened and we had to postpone it. Sigh – but finally, in the coldest weekend in January we braved SeaWorld.

I relied on the learnings from previous gluten-free blogging about San Diego and SeaWorld – like our buddies at Rock a Healthy Lifestyle (Ken Scheer) and Glam Without Gluten. I love those two, and after hearing from them (and other amazing people that commented on my posts about going to SeaWorld), I felt confident that I needed minimal meal planning for the day-of event.

I brought a ton of snacks (but no bread or sandwiches – I read online that celiacs had to throw away their sandwiches because it was against policy somewhere, I guess because it’s the most meal-like substance we have that could compete with their food?). We brought KIND bars, Larabars, gluten-free turkey jerky, and candy canes (don’t judge me – I love Christmas candy). When both of our stomachs were growling, we went to Shipwreck Reef Cafe where I heard that there was the best service in the park.

I approached the buffet line and asked for a manager. I picked up their Allergen-Friendly Dining Card (shown below) that you’re supposed to present to the manager with your allergies listed. Luckily, it was super slow, so I could just have a conversation about eating gluten-free there. 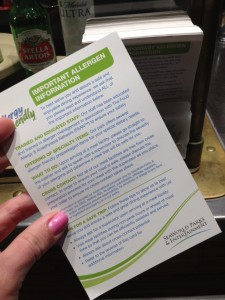 Daniel (an amazing leadership team member) came out and showed off the awesome allergen-awareness folder, full of every single menu item they have and every single ingredient (down to condiments) that were in each menu item. He didn’t tell us what to eat – he asked us what we wanted to eat! What a great change! 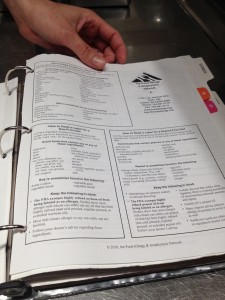 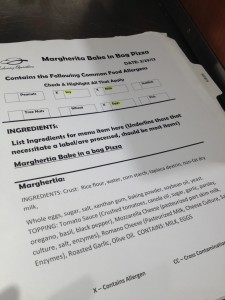 Daniel was really great to work with – he definitely deserves a raise! He walked us through all the options. I opted for the turkey (which he got freshly-sliced from the back) and steamed veggies (made with only margarine and spices). Non-GFBF opted for salmon and then at the last minute he changed his mind and went for the bake-in-the-bag pizza. I’m assuming this is similar to those bake-in-the-bag pizzas at Chuck E Cheese. Since it bakes in the bag, it doesn’t touch any of their ovens or tools. In fact, it came with its own pizza-slicer! Now, was the pizza good? No. It was like a junior high pizza boat. BUT, was I excited that they offered gluten-free pizza at Sea World served the right way? Yes, yes I was. I think any kid would be so happy to have a pizza there and feel normal – and all the adults would be happy with healthy options like meat plus a veggie side. My dinner was really great, and I was happy with the turkey and the veggies. It kept me full throughout my time at the park. 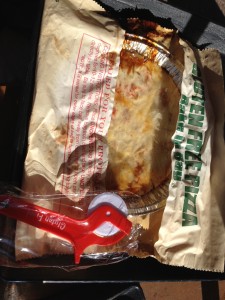 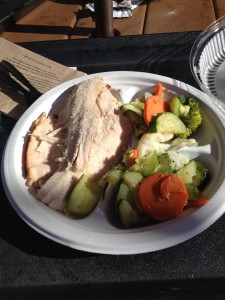 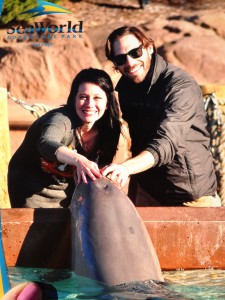