I recently posted a video on YouTube because I was just kind of fed up. I had one too many comments either told to me, mentioned on a GFF’s blog, or talked about in my personal life. I want to talk a little about bullying, criticizing, and food superiority (as one reader aptly named what I was talking about). I put my thoughts down to paper, but had so much to say that I spread it out over two posts.

TOPIC: WHEN DID FOOD BECOME THE NEXT COACH PURSE?

I’ve been feeling this way since Expo West, where I was thrust into the natural/vegan/vegetarian/organic universe – where everything I put in my mouth felt like it wasn’t good enough because it wasn’t “XYZ.” I even overheard some vegan bloggers complaining that other bloggers were pestering them about their own food superiority with passive agressive comments about palm oil. “OMG did you see her comment, she was like ‘it’s too bad that includes palm oil.’ I can’t believe she said that. Passive agressive much!?!?” Now, I don’t really know what palm oil has to do about anything because I’m not vegan (and I kind of felt like I was listening to Clueless), but those comments started me on this whole topic and it didn’t get better when I got home.

Most of what I found online was about bullying with children – but I know that it isn’t true. I feel like the kid who eats lunch alone in the bathroom when I step foot into the new yoga studio down the street where everyone has perfect butts and expensive Lululemon yoga gear. Even as grown adults, we are faced with misunderstanding about the gluten-free lifestyle for those with celiac or intolerances and even cruel words, unneeded and unnecessary advice (that may not actually be accurate), food superiority or even bullying. I thought that once I went GF and found my community that everyone would be so full of love and puppies and sunshine that we’d all be happy with gluten-free life that we wouldn’t feel like the kid in the bathroom at lunch.

As I was thinking about doing my YouTube post, one of my GFF’s Alissa of Breaking Up With Captain Crunch wrote a piece about it in “Advocacy Is Not Spandex.” Here’s an extract from that:

I choose humor, or at least, I try, to spread my message. Yeah, I like junk food. No, I do NOT love exercise. I’m obsessed with keeping myself as gluten-free as possible (just ask my incredibly patient, forgiving and HANDSOME husband). I’m not going to lecture you for not eating only whole foods, or only organic. I will get needlessly excited about Glutino toaster pastries, and gluten-free expos and bowling alleys where I can eat pizza. That’s my advocacy. It might not be your advocacy, and that’s cool. I still respect what you do, even if you are up running in the dark, or harvesting your own chickens or giving up chocolate. 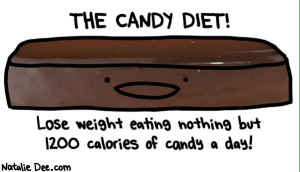 Comments like “how do you eat all that?!?!” and that eating processed foods make you fat, unhealthy, lazy, etc. make me so angry. Eating gluten-free is hard enough as it is – and I’m one of those people that think it’s “easy” after years and years of perfecting the diet (and I still struggle every now and then), so when you’re telling me that I’m only going to “heal,” feel “100% again” or lose weight by going paleo, primal, whole 30, vegan, corn-free, soy-free, quinoa-free, GFCF, etc. it upsets me. Hey, if you have done any of them and succeeded, I am so happy for you. But when it comes to a standard diet for EVERYONE, I truly believe there isn’t one that is cookie cutter for everyone. X > Y > Z > eating cupcakes for breakfast – and everyone seems to have their “X.”

I follow one brand – and this brand will not be named – that creates a lot of fear in their posts. And they aren’t the only one. Everything is always “XYZ NOW CAUSING CELIAC SYMPTOMS” “DID YOU KNOW YOU CAN’T HAVE COFFEE WHEN YOU HAVE CELIAC?” “OMG CORN IS THE SAME AS GLUTEN.” “CROSS REACTIVITY BLAH BLAH BLAH.” We’re already on edge as a celiac – we’re already on pins and needles about literally everything. The last thing we need is fear-based marketing for your blog. Until CDF, CSA, or another celiac organization tells me I can’t have XYZ, then I will keep eating it – if it makes me feel good. Now, like always, if something makes you feel like crap – don’t eat it! But please don’t make anyone fearful of food, we’re already terrified of food. Now, if there is science (proven science) to back something up, and you want to spread the word, that’s fine. But we don’t need to be on red alert about literally everything. Calm down, have a sip of wine, and think twice about the blog title.

Tomorrow’s topic: MY CELIAC IS NOT YOUR CELIAC and how our paths to healing are different too…