I’ve been lucky enough to have been asked to visit Disney’s Aulani Resort in Hawaii for a media trip with SheKnows.com. I’ve been writing for SheKnows.com’s expert program for a while now (see all of my articles here), and I’m more than a little excited to take this trip with the SK crew! Now, a media trip means I’ll be all over the resort, trying to see it all within a few days so I can come back home and write about it all for you guys!

Aulani opened in August of 2011 and sits on 21 acres of oceanfront in Ko Olina, 17 miles from Honolulu International Airport.  They recently expansion (completed in October 2013) and Aulani now offers more than 840 rooms and villas. On top of the great rooms, they have endless pools, spa amenities, and the beach…c’mon….the beach. And now I’m headed there in February!

I called the resort ahead of time and confirmed that they do, indeed, know how to cater to a gluten-free guest with celiac disease. I’ve heard from plenty of people that Disney as a corporation really knows how to take care of gluten-free guests. I’m happy to travel to Hawaii and report back how it went – especially if I get a chance to sit down with the chefs or kitchen staff! I’m excited to check out their dining options, especially ‘AMA ‘AMA which is their higher-end restaurant that I’ve seen nothing but amazing pictures of all over Instagram.

I’m also very excited to write about their wellness opportunities – including the pool, spa, and many fitness opportunities! Be prepared for a lot of photos of me in yoga pants – even if I’ll be wearing an ankle brace or boot! 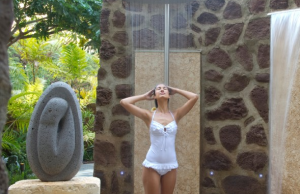