It sounds like some sort of punchline to a joke, right? “A celiac and a vegan walk into a McDonald’s sponsored party and….BAH DUM CHING!”

But it wasn’t a joke. 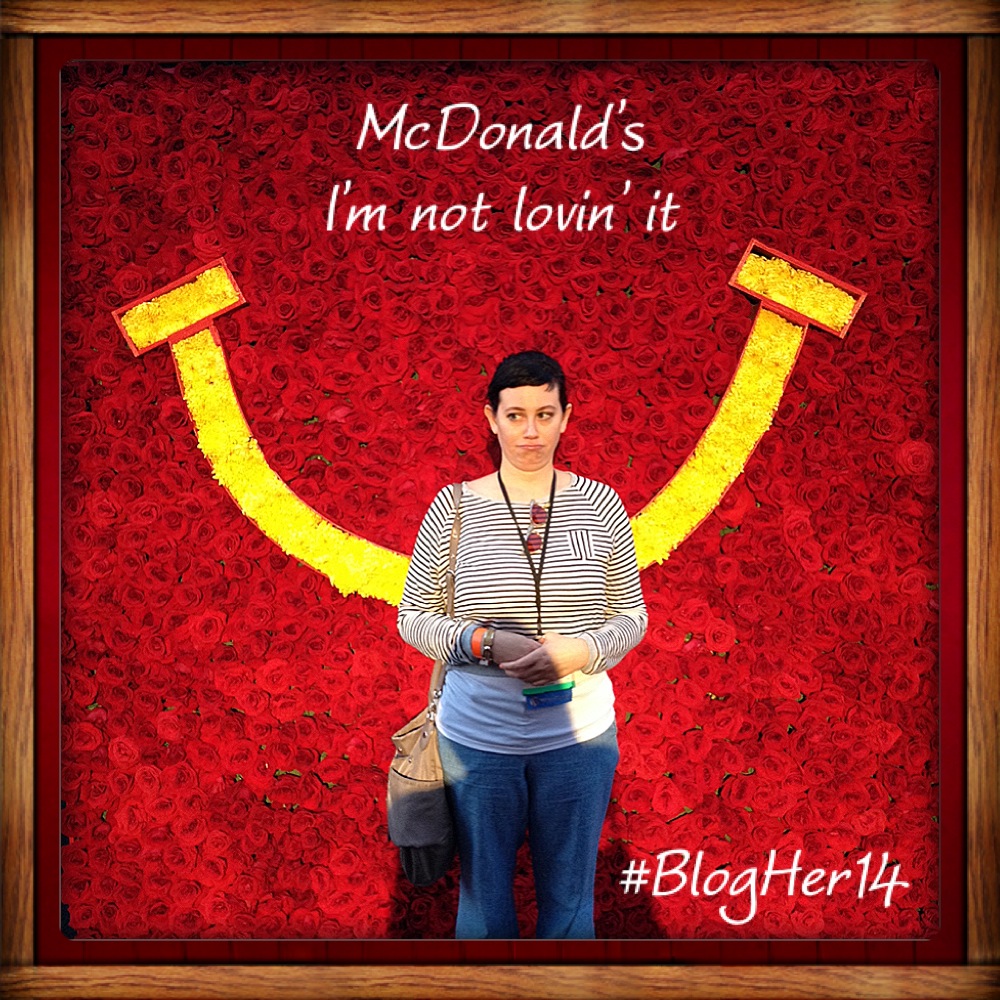 A Celiac vs. McDonalds

I go to a lot of conferences and expos throughout the year, but most of them are gluten-free focused (Jen’s GFAF expos, Living WIthout Gluten Free and More Food Allergy Fests, Food Allergy Bloggers Conference), or gluten-free friendly (International Food Bloggers Conference). However, there are always some that are hit and miss when it comes to catering to our community. These “normal” expos scare the crap out of me (sometimes literally). This year’s BlogHer ’14 was no different. Breakfast and lunch were provided by the conference, but dinner was on our own – as most of the events at night only served appetizers. I, once again, had to rely on FindMeGlutenFree.com and the app to actually get me through the weekend. Unfortunately downtown San Jose is NOT the friendliest of places for a celiac and a vegan to dine together at. We ate at two places that were noteworthy that I’d like to share.

1) Il Fornaio In a stuffy old hotel in San Jose is an outdated old-school Italian restaurant where the servers and bussers wear chef coats and plate food for you. But they have an awesome gluten-free menu and color-code your item in the back of house. And they have a killer wine menu. So although the faux-fancy-restaurant ambiance was off-putting, we went back twice for their gluten-free pasta dishes. I also had a delicious antipasto plate with proscuitto and salumi with artichokes and olives. I like that the gluten-free version of the dish had rigatoni pasta vs. the “regular” dish that was served with spaghetti – something that makes it easier for us to see if we’re getting the right dish. Great joint. If I ever end up in San Jose, I’ll be back. 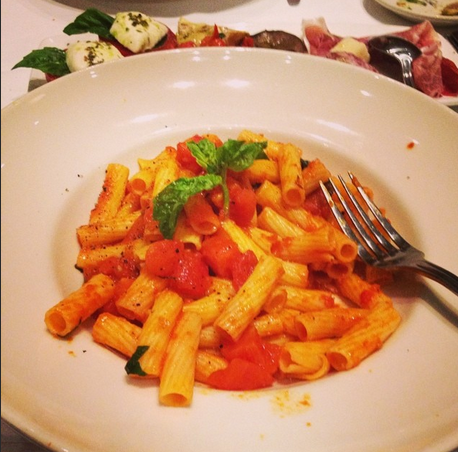 PS now imagine this in a blender and that’s what I threw up all over myself. It was impressive.

2) Plant Based Pizza We got gluten-free vegan pizza delivered to our hotel room. It honestly couldn’t have been better. Not only was the pizza really good, but the side salad was awesome too. And it delivered. And they wash their individual pizza racks after each pizza. And they knew what celiac was. Two thumbs up! I would totally support having one of these in Phoenix! 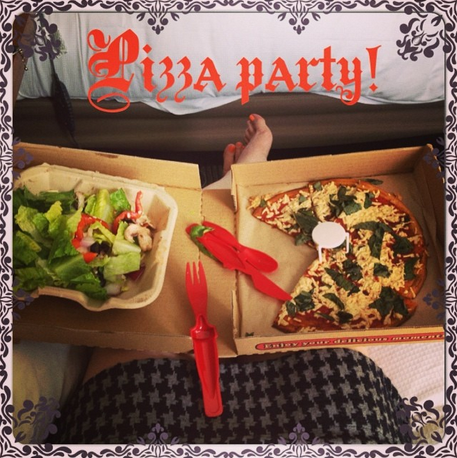 But back to McDonald’s – they offered hamburgers/cheeseburgers, McNuggets, fries…and side salads. I wouldn’t even trust the side salad (and even if I didn’t it wasn’t a full meal by any means). We walked into the event and saw that we could potentially be used for McDonald’s marketing purposes. Although I’m from the corporate marketing world, I still did not want to be photographed even near the McDonald’s food. It’s hard pressed to find a fast food allergen menu with this much gluten, milk, and beef in it. Seriously, even the french fries. Ingredients: Potatoes, Vegetable Oil (Canola Oil, Soybean Oil, Hydrogenated Soybean Oil, Natural Beef Flavor [Wheat and Milk Derivatives]*, Citric Acid [Preservative]), Dextrose, Sodium Acid Pyrophosphate (Maintain Color), Salt. Prepared in Vegetable Oil (Canola Oil, Corn Oil, Soybean Oil, Hydrogenated Soybean Oil with TBHQ and Citric Acid added to preserve freshness), Dimethylpolysiloxane added as an antifoaming agent. 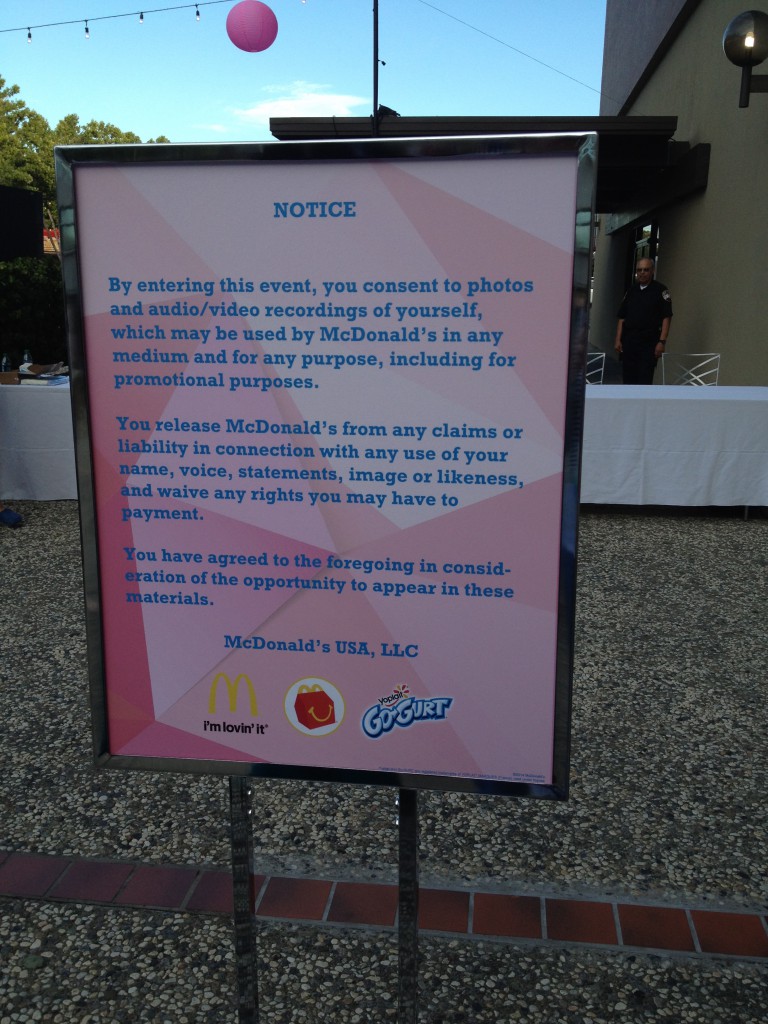 So while everyone else got to eat. I didn’t. Neither did my vegan friend. But I’m used to not being able to eat somewhere, that’s fine. But usually I’m in a familiar neighborhood where I know there is gluten-free celiac-friendly food around. I was not in that position. I can haz a sad. 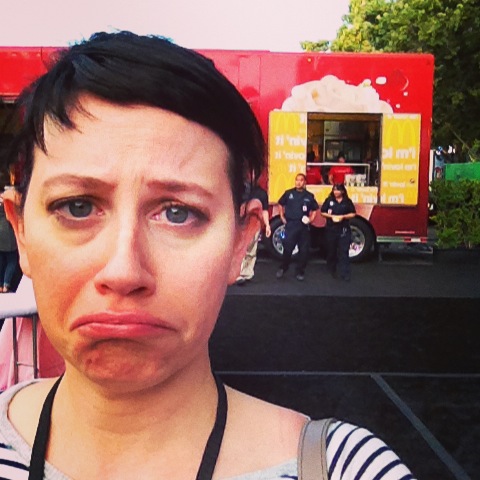 But it wasn’t that big of a deal because we were just supposed to be in and out. I mean, I really didn’t want to stay and accidentally get photographed by McDonald’s. But we ended up staying for the EPPA Sangria (because it’s gluten-free and awesome) and because there was dancing. But then…the smells. OH THE SMELLS. Everything smelled like French Fries. And Chicken McNuggets. And Beef. Everywhere I looked there was some mommy blogger professing her love for the Big Mac and scarfing down food. I was somewhere between incredibly jealous and incredibly nauseated. LOOK AT ALL THE FOOD I CAN’T EAT. 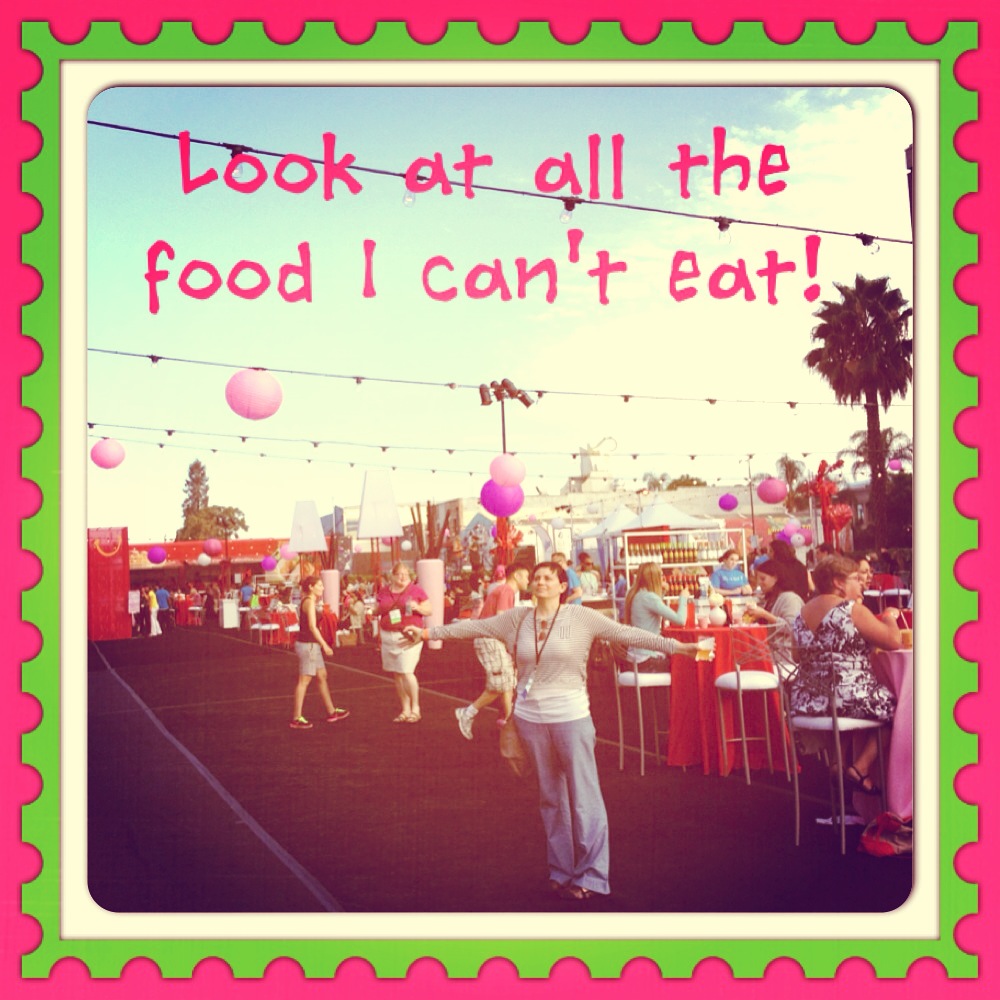 So we left. Way too late. It had been way too long since I had had real food. We decided to walk to a vegan/gluten-free restaurant – and another 30 minutes later, we walked in and we were more than nervous by what we saw in the kitchen – and a stuffy packed “room” that smelled like lentils. Nope. And then we did what probably every celiac does/has to do on vacation – eat at the same restaurant we ate at 48 hours before because it was the only safe place within walking distance. Sigh. But the moral of the story is that even through all of this (sans the stomach flu thing), we managed to find vegan gluten-free food at a conference. Even if we had to work incredibly hard for it.