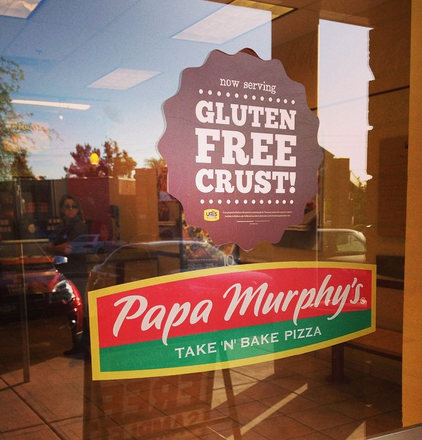 UPDATED 2019 TO INCLUDE STATEMENT FROM PAPA MURPHY’S

Full disclosure, Udi’s sent me a gift card and some Papa Murphy’s swag so I could celebrate in their launch of their crusts in a nationwide pizza take-and-bake restaurant. Naturally I was very excited to be part of the experience. Especially since we use Udi’s regular pizza crust all the time (unless we shop at Safeway, and then we buy Rudi’s). And yes, the Udi’s team DOES know about my experience at my Papa Murphy’s and major kudos for them for having full transparency in posting this. 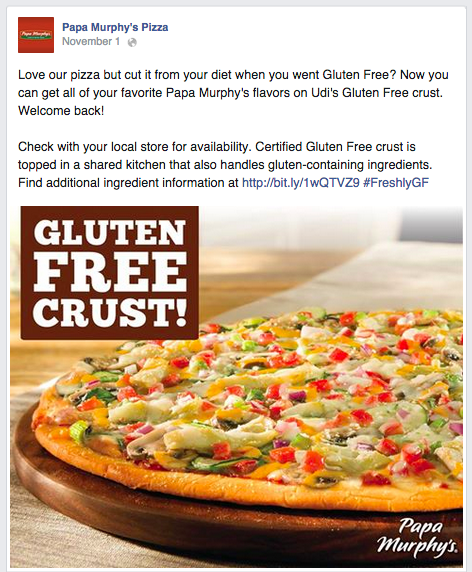 I might have just had a crappy location. With a crappy manager. One that is way too stressed and could give two craps about getting my pizza safely to me. When I came in, I wanted more information – how it was prepared typically – the usual for my first time investigating a restaurant.

Here’s my major issue with this: they use the same utensils and ingredients as their gluten pizzas including spreading the sauce on the pizza. I talked to the manager a bit more and he says he never does anything different than changing gloves – especially during the busy time (although he said they were busy most of the time). Even IF they change gloves, it’s major cross contamination and is not celiac safe.

At this point I could either walk out, go yell at Udi’s and boycott Papa Murphy’s. Or, I could put on my charm and ask him if he could prepare my pizza the right way. He was visibly upset that I made him prepare mine with separate utensils and new ingredients in the back – on a new surface. He was huffy and although I think he was trying to hold his team together, he seemed visibly frustrated. Yes, he had to open all new ingredients for me. But hey – I tried to tip him with the remainder of the gift card (they don’t accept tips, FYI). Needless to say, I was disappointed by my experience and would not go back – especially during any “busy” times.

To investigate further, I called another Papa Murphy’s in my area, but several more miles away from my house. This other location told me on the phone that they have new utensils and a separate prep area (sounds like Chandice’s experience above).

How did the pizza taste? It was great. They don’t have dairy-free cheese, so I added my own and then baked it. If I went to a location that had a great manager that took care of me, even when it was busy, I think it’s great to order a pizza, pick it up, and then bake it at my convenience in my own oven.

Bottom line. With the experience that I had, I hate to see Udi’s affiliated with a company doing it wrong so blatantly – even if they do provide shared kitchen warnings (and they do – lots of them). It’s really not that much harder to have a separate prep area using new ingredients or dedicated gluten-free ingredients and utensils. I hate that someone could walk in, thinking they would be safe, and just because they didn’t investigate how the prep was done, blame all restaurants for being unsafe – or, mistakenly blame Udi’s. If everyone had an experience like Chandice did, I think I would be much happier with how this partnership works. I’m blaming Papa Murphy’s for not taking the time and energy in all of their locations to do the proper training for this new pizza. Because even though we know the Udi’s crust is safe, and we know our own oven will be – that’s not all that can happen to your pizza before it reaches your mouth.

With this post, I’m begging Papa Murphy’s to institute national all-chain training for their gluten-free pizza orders. You just need a little training and then you can assure safety for ALL of your gluten-free customers.

Upon request, we are happy to change our gloves when handling a customer’s Gluten Free crust, however, we do not have a separate area or separate utensils specifically for our Gluten Free crusts. Papa Murphy’s Stores prepare our fresh Original, Thin, Pan, and Stuffed crusts in-store on a daily basis, all of which contain gluten. While the Gluten Free crusts are free of gluten, Papa Murphy’s stores do not have separate prep areas, separate utensils, or separate toppings for gluten free products. There is a possibility for ingredients to come in contact with other ingredients during the preparation process. 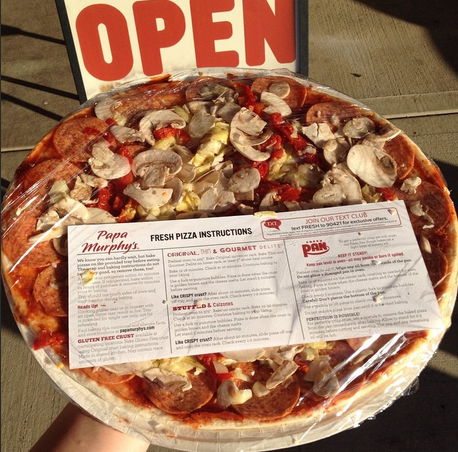