After a few weeks with the sensor I’ve already experienced some highs and some lows. It’s made me so stressed out I made myself sick BUT It’s made me so happy I wanted to high five everyone at the table. I’ve put together some of my thoughts below for when you get your Nima sensor. Make sure to read the stories below for more details.

I made this mistake (read the full story below) and it didn’t turn out well. You can wait the 2-3 minutes it takes to get the results, trust me. You don’t want to take a few bites and realize that the food isn’t safe after all. I’ve seen this happen with other beta testers too. Just wait, practice patience, and cross your fingers.

**It’s Awkward For Everyone

**Put Your Big Girl (or Boy) Undies On

You’ve got to speak up. I know that not everyone can be as outspoken as I am. And I’m glad for that – the world might be a little intense if that happened. But when it comes to this, you’ve got to put on your adulting pants and speak up. Muster up all the courage you have and let the restaurant staff, manager, chef, etc. know that you have found gluten in a place where there should be not.

**Be Understanding But Firm

I know it’s scary to find gluten when you weren’t expecting it. But hopefully, the restaurant will be just as surprised. Hopefully they’ve worked really hard to make sure that their gluten-free menu is actually gluten-free and there was just a simple mistake made somewhere. Mistakes happen. You have to be understanding about that, just like if a family member made something for you, but made a mistake along the way – you probably wouldn’t cuss them out and try to flip a table, Real Housewives of New Jersey style. While you should express your concern that your meal is unsafe, and firm in the fact that this needs to be remedied moving forward for them to state that it is truly gluten-free, there needs to be understanding.

So what if the restaurant is flippant about the meal containing gluten? What if the staff really doesn’t care? What if they aren’t concerned about it. What if they tell you they can’t make a gluten-free meal with the care that you need? It’s completely okay to leave. While it would be great.

The story about Bang Bang PDX is a hard one to tell. I love this restaurant and have been shouting about it from the mountain tops since I went there with Keeley a few months ago for #EatFreelyUSA cross-country road trip. However, this experience was slightly different. This restaurant, if you are not familiar with it, it 100% gluten free. Everything on their menu is free from gluten. They work with providers to receive products that are sourced to be gluten free. And their food? Their food is incredible. I was in heaven when I went there. Delicious asian food that was so creative and so tasty. I could have spent every night there. But this time, I brought 4 other people, who are all gluten-free, and just assumed they would all be safe. 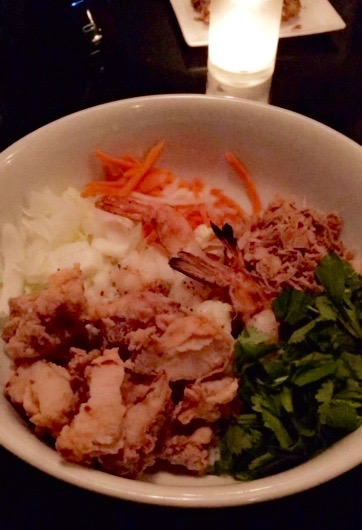 But you know about assumptions. I didn’t use my Nima sensor to test the food before we ate it because I assumed it would be all safe – a smiley face and we’d all move on. But instead, we ate while the Nima was working and chatted and caught up over a good meal. Except when the sensor came back as “gluten found.” [TEST NUMBER ONE] I don’t think I took a breath for seconds…just starring at the sensor. How could this happen? And then I asked Taylor, from Gluten Away, to test his food, as we had ordered the same meal, and it also came back as “gluten found.” [TEST NUMBER TWO] By this time, panic had set in. 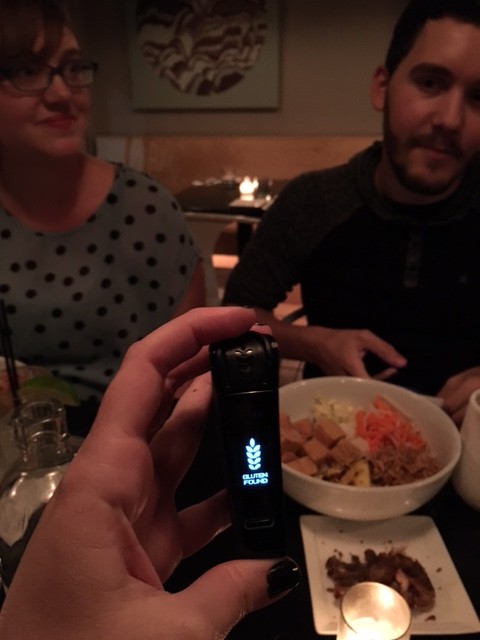 Sadly, the Nima Sensor cannot tell you how much gluten is present, only showing if a low amount of gluten is found, or a high amount of gluten is present. The sensor is optimized at 20ppm, so chances are high that if you get a low gluten found, it will still be over 20ppm and unsafe for celiacs. It could show you that there is cross-contamination in the food, or a small amount of a gluten-containing product is present. High gluten could show you that you probably got the wrong pasta, wrong bread, etc. Regardless, a “gluten found” is not an assuring sign, especially at a dedicated gluten-free restaurant. 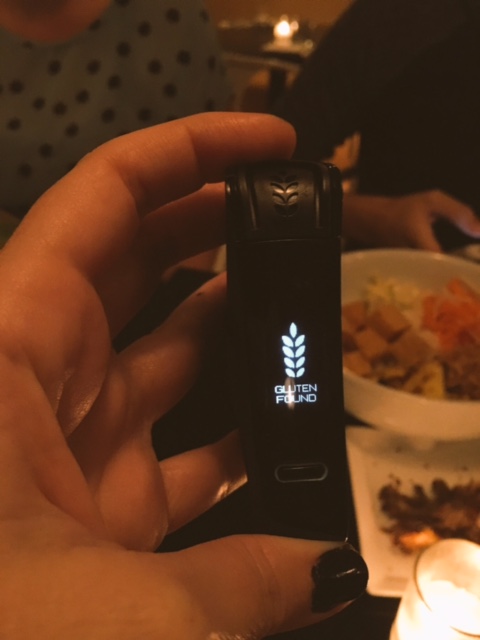 I was in a panic. That’s all I could basically do. It’s like my tiny little safe gluten-free world was upside-down and I felt like I lost trust.

The manager was incredible and just as flabbergasted as we are. I had told her before the meal that we were using the product, and of course – because they work so hard, no one was worried about the results. However, when she saw that two of her dishes came back with a “gluten found,” she was concerned. Let me tell you this now, Bang Bang PDX is a caring and compassionate restaurant that is dedicated in looking into sourcing of their ingredients. But the science didn’t lie, and there was an ingredient that Nima said “no” to, twice. Everyone was very understanding and we had a long discussion on ingredient sourcing and the ramifications of this.

Taylor and I did some detective work, and figured out that it must be the only fried ingredient in the dish – removing the suspect ingredient first to see if that was the offender. She brought out dishes without the ingredient, and we retested and got a smiley face – which means under 20ppm. [TEST NUMBER THREE]. After this, we finally felt comfortable enough to eat, unfortunately, after a few had already eaten their first meal. 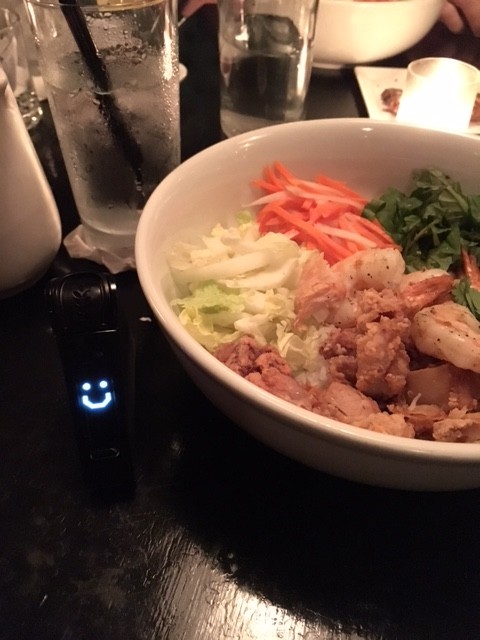 While I think that Taylor and I solved the mystery,  I was still up all night tossing and turning. The manager had given me a bag of the offending fried ingredient to take to test later. But at 2am that morning, I couldn’t wait any longer. I had to get it off my mind. I sprinkled only a few in my Nima device. Only a pea sized amount was used to test, and the dish comes without probably 1/4th of a cup of the ingredient. And low and behold -“gluten found” appeared. [TEST NUMBER FOUR] The next day, I called the restaurant to let them know, and to assure them that I still had faith in their restaurant, but it had to go. Now, it could be one bad batch of the ingredient. Or it could just be a bad supplier. Even though they worked hard in making their restaurant safe, one ingredient – one ingredient – could turn one meal into a bad day. 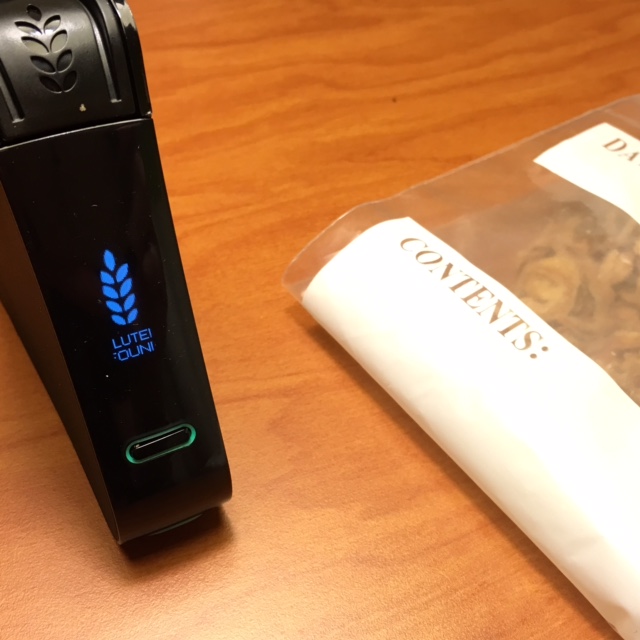 That day threw me for a loop. After all of that, did I even want to use the NIMA sensor ever again? Or could I just live life in blissful ignorance? I decided I’d rather be informed and anxious then blissfully ignorant and sick. And after I found out that the few that did eat the shallots did end up feeling like poop afterwards, I knew that this tool should be used for good and for the betterment of celiacs dining out, period. It’s better to be in the know. It’s better to help pay it forward for the next round of celiacs.

I did end up testing other things in Portland too from other gluten-free restaurants and bakeries. Like this, for example, is an amazing gluten-free dairy-free apple fritter from Back to Eden Bakery, one of my favorites in Portland. 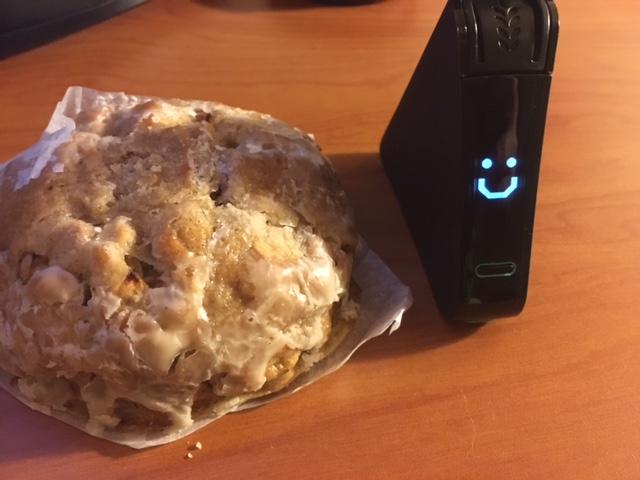 As soon as I got back from Portland, I was on my way to Austin, TX for BlogHer Food. BlogHer has tried so hard after the bacon/bread incident last year, and then the labeled GF/but not actually GF breakfast of 2013. But you know, I am always careful, especially of conferences that I’ve been burned by in the past. This year, their food tested safe, including this Udi’s veggie GF sandwich. 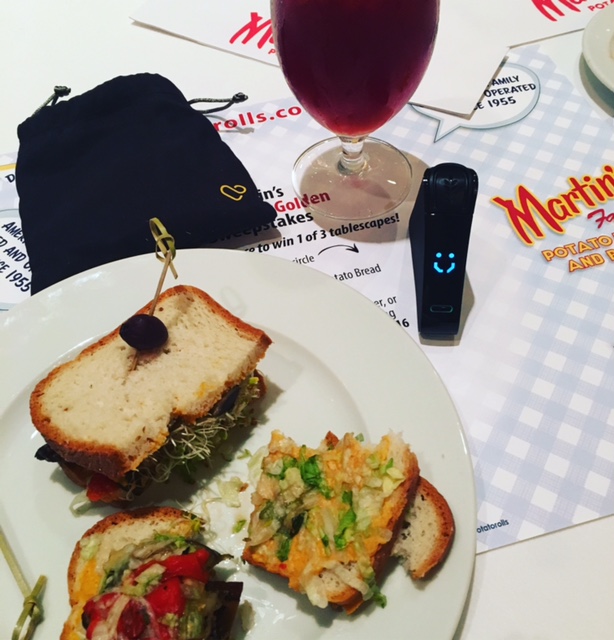 I had the pleasure of joining friends that also ate GF. We went to True Foods in Austin and had an amazing meal. I always feel safe at True Foods, even in other cities outside of my hometown of Phoenix. However, their new squash pie was too good to be true. Dairy free and gluten free? How could you make something so delicious! Joke is on me, because the pie is safe! It’s on my must-eat list for anyone visiting True Foods. A Nima Sensor WIN in my book! 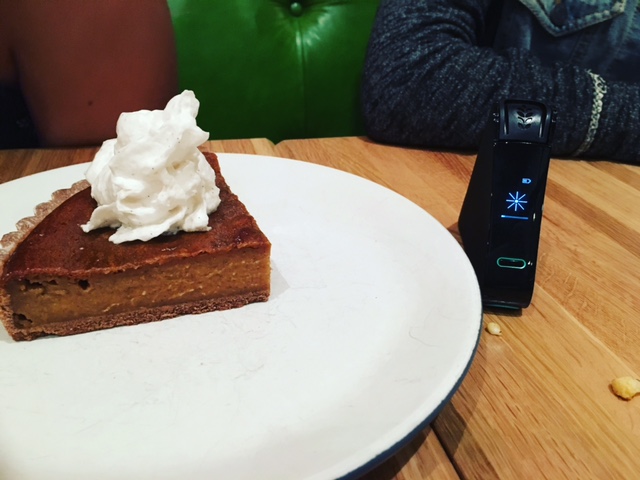 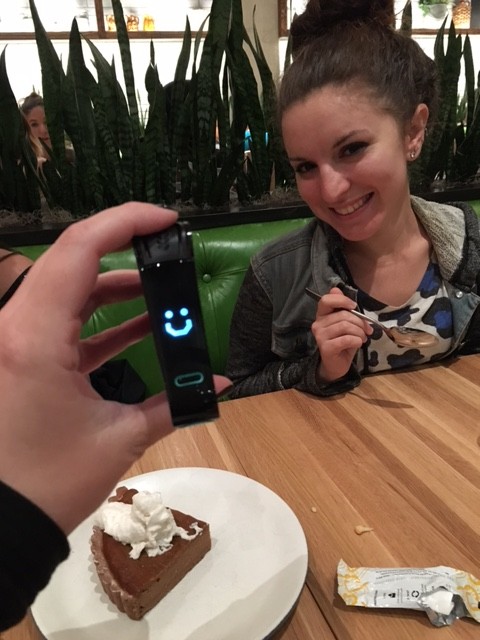 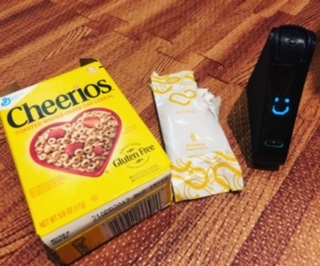 Again, a whirlwind of highs and lows taking the Nima Sensor on my first road trip. I do look forward to using the Nima Sensor in all of my travels, especially the crazy first of the year in 2017. Am I nervous every time I use it? Yes, but “peace of mind at meal time” does come with a cost – financially and emotionally. Until that smiley face comes on, and everything is beautiful once again.

I decided I’d rather be informed and anxious then blissfully ignorant and sick. 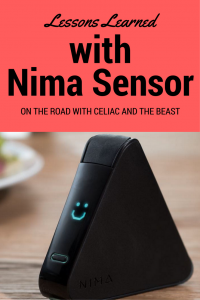 **Nima Sensor is a paid sponsor of Celiac and the Beast, however, this post was not compensated.**