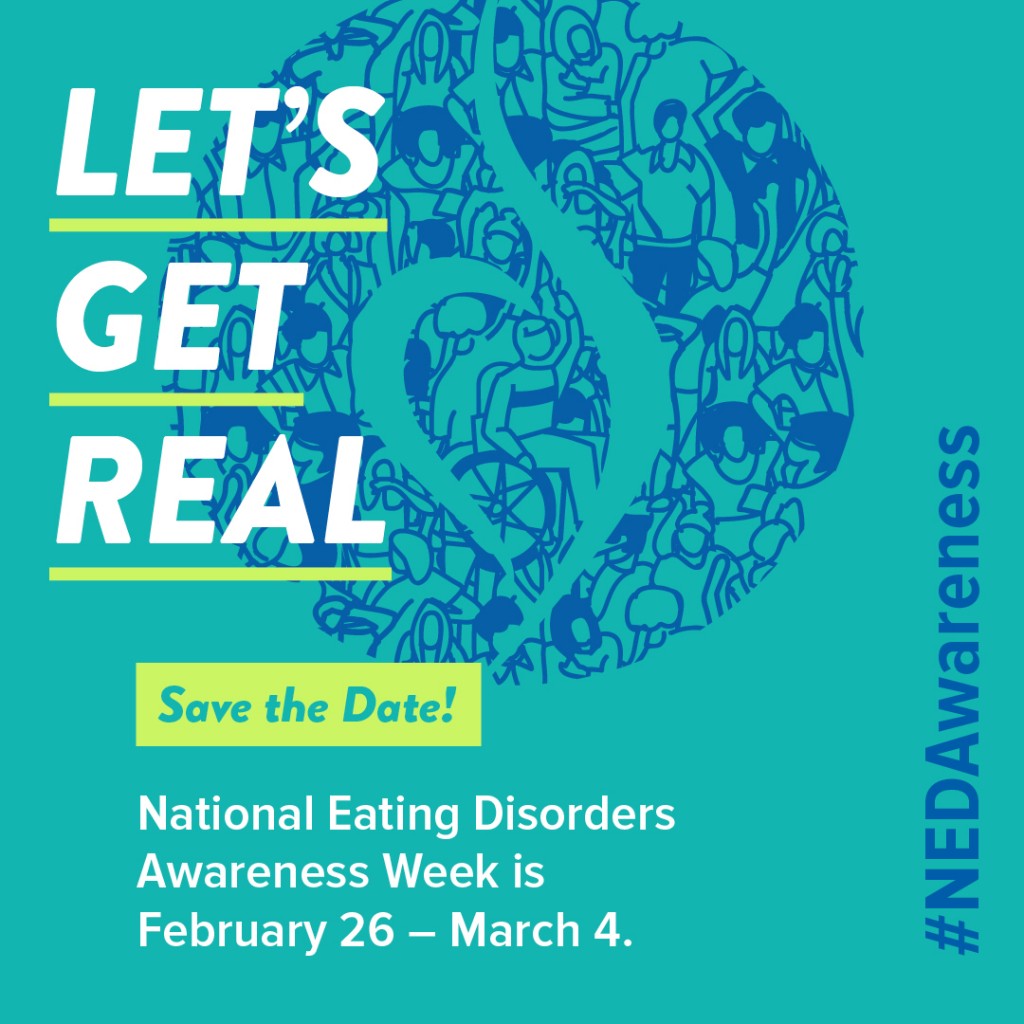 Eating disorders can affect anyone, anywhere. Let’s get real about who struggles and bust harmful myths together! Join me and NEDA for National Eating Disorders Awareness Week (#NEDAwareness) from February 26-March 4 this year. Learn how to get involved as an individual or become a partner organization at nedawareness.org. 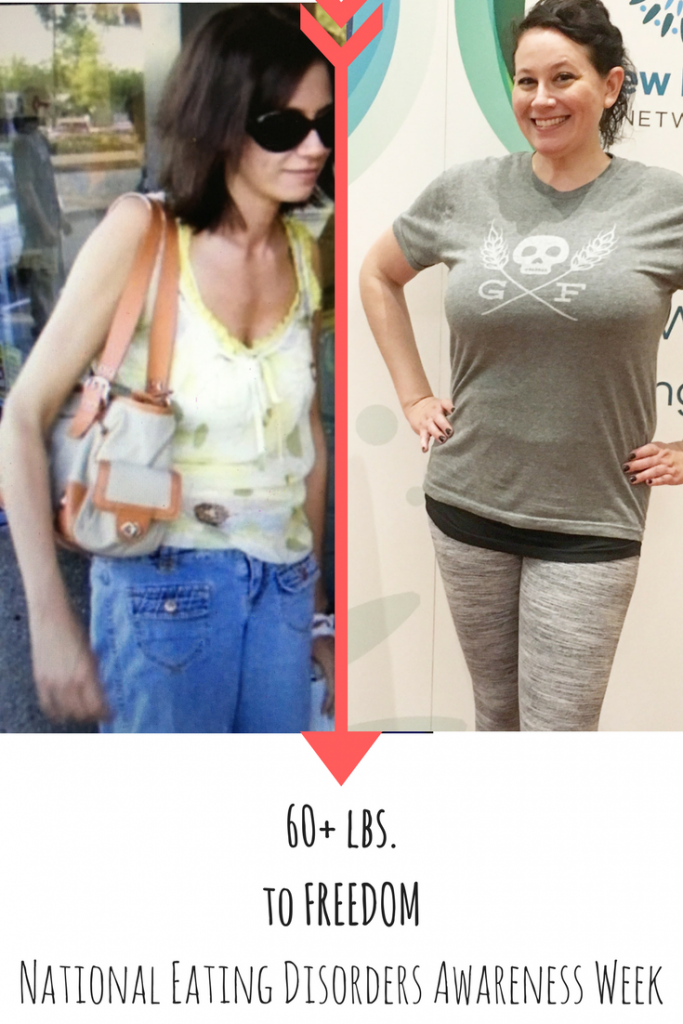 Please allow me to stray from writing about celiac disease, but not too far, for this week as we talk about eating disorders.

I’m not big for before and after photos, because typically they’re used to show off how people can get super skinny after following terribly restricted diets and use food and exercise as a punishment…but forgive me as I posted my own above. It may come as a shock to you to see it. Hell, it scares me to see it again too. But I can post it because I’m recovered – or in a phase of constantly recovering – from it. And because now maybe you’ll see when someone tells me to my face that I put on a bunch of weight (duh, no shit, I live in this body, I see it every day), it bothers me more than someone who didn’t have this before and after.

I wanted to write something here about my previous struggles, but I think I already did that, when I wrote my book. You should buy it.

I’ve decided to put an excerpt from my book in today’s post. Because who said it better than…me…about me. While this may be a trigger warning for those who struggle with disordered eating, I just wanted to share my story with you, in case you identify with it and decide to seek help – like I did – to help turn your life around.

“For a few years, things definitely weren’t okay. I had giant bottles of chewable Tums because my stomach was never right (I don’t know; maybe it was all my anxiety or the fact that I was actually hungry?). I got down to less than 110 pounds, which on my 5’6” frame made me look sickly with tiny bird arms and thighs that didn’t touch. I blacked out every time I stood up and I was pretty weak. But mostly it was a mental exhaustion that really wore me out. Trying to strive for perfection, overextending myself, and then not eating a balanced, healthy amount of food was enough to spike my anxiety to an all-time high, and that anxiety just perpetuated the cycle.

Even after I thought I was “better,” I had massive issues around food. My first few years of college were rough when it came to food and eating with others. One of the worst days happened during my freshman year of college, when I took someone I was dating out to dinner with my family. I don’t think I ate more than a few bites and instead I just moved food around my plate. And then I went to the bathroom and just…cried. I struggled to eat on dates, and that lasted until after I graduated …

While some people had concerns about me, they usually addressed it by making it a joke instead of a serious issue. People always made wisecracks about how skinny I was or how I never ate at meals. Instead of disordered eating being a joke, I wish that people met it with concern and education (I don’t know, kinda like how I feel about celiac disease – right?). But, luckily for me (and believe me, I’m a rarity), things got better on their own.

After my first year of college, I developed more of my own sense of self and realized what trigged my anxiety and negative self-talk cycles. The normal BMI score for someone my height would put me at 120 lbs. And I struggled when I hit that number. Getting labeled with the term “normal” was like saying I was morbidly obese. Because if I was normal, I couldn’t be perfect, could I? Always being underweight gave me some sort of sick pride. But it was something I was slowly getting used to. Eventually, it started to seem weird to see pictures of my underweight self, instead of my image in the mirror at my current weight.

For a few years, things were going really well. But when I was diagnosed with gastroparesis, and then subsequently celiac disease, I was terrified that I would relapse into negative associations with food – and I think part of me did. After years of restricting my eating, I had finally healed and felt like I could eat whatever I wanted. But with this new diagnosis, I would have to focus on food even more – reading every ingredient label, asking questions about my food, and getting more anxious about eating then I ever had before.

There’s not a ton of research out there on the correlation between eating disorders and celiac disease. 35 Dr. Daniel Leffler from the Celiac Center at Beth Israel Deaconess Medical Center found that over a five-year period, 2.3 percent of the female patients they treated either had celiac disease and an eating disorder, or they had celiac disease that was masquerading as an eating disorder From National Foundation for Celiac Awareness’ 2013 post Celiac Disease and Eating Disorders, author Amy Jones wrote the following: 35 Most articles I could find reference a 2007 study from the Beth Israel Deaconess Medical Center and Dr. Daniel Leffler found in the European Journal of Gastroenterology &amp; Hepatology.

“According to Dr. Leffler (personal communication, February 26, 2013): ‘Celiac disease can exacerbate, precipitate or otherwise complicate eating disorders. Healthcare providers specializing in eating disorders should keep celiac disease in mind, especially if their patients have a history or family history of autoimmune diseases.’”
I’m not sure I’m ready to make the leap that celiac disease caused my eating disorder, and I’m pretty sure it didn’t. However, I know that there is a strong correlation between celiac disease and issues like anxiety and OCD, and a strong correlation between anxiety, OCD and eating disorders. So, although I won’t put this in the celiac “win” column, I definitely think the two are connected – especially after I was diagnosed with celiac. All of the old feelings came rushing back about limiting my “safe” foods and I was back to thinking about food 24/7.

I’ve been very lucky that I haven’t relapsed when it comes to the way I eat. I do eat cookies and a list of unhealthy fattening foods, but I try to regulate some of the inner guilt that comes from my old ways. I still catch myself starring at my body in the mirror and feeling disappointed. Why couldn’t I lose my gut? Why do my thighs touch? As I write this, I’m at the heaviest I’ve ever been. I struggle with positive body image regularly – even though I believe I am a pretty good-looking gal. I really push myself to limit negative self-talk and to try to build up others – regardless of what they look like, how much they weigh, etc. I truly believe that everyone is beautiful and everyone has something to offer the universe, even if they don’t feel like it — hell, even if I don’t feel like it. But, after I became a blogger, I realized that there are people out there who want to force their diets upon others. I guess because of what I went through, I’m really sensitive to it. It angers me when someone gives me shit about posting a cookie recipe, or tells me that the only way to really feel good is to go paleo and that I’m treating my body like shit. Right now, I’m happy I’m eating in front of someone. I’m happy I have a varied diet. I’m happy I can eat that cookie without crying or spending two hours in the gym in shame or staring at my body and wondering where that cookie went. I am proud of what I’m eating and how I’m treating my body. I believe in everything in moderation because moderation is what I’ve always strived for. Moderation is what I never had. Moderation is way better than restrictions and extreme dieting. Moderation to me is happiness.

Do I want you guys to eat nothing but cookies and celebrate in the fact that you can do so? No. I sit up at night and read all the books about the food industry and modern-day diets, etc. I still think fast food is awful, and it’s been scientifically proven to be bad for you. Do I think that it’s okay in moderation? Yes, but good luck finding really good gluten-free fast food! I believe in eating as healthily as possible, including fresh fruits and vegetables at every meal and limiting carbohydrates and increasing protein. But I think that mental health is important to your diet too. Again, this does not mean that I think you can cheat on your gluten-free diet (because as you know, I don’t believe in cheating) as your diet will make your life easier and stop your anxiety around food – but please don’t take celiac as a way to hate food. I’ve been there too often, and I’d hate for you to be there too. I don’t do well with people telling me what to eat. It makes me feel so ashamed, like what I’m doing isn’t right. I even had a nurse make some snide comment about how I should stop eating gluten-free pizza. Thanks for that one.

On some of these detrimental fit-spo (Fit-spiration, like fitness and inspiration had an annoying baby, clever, right? and thin-spo (the evil twin of Fitspiration) sites.**updated note: I see this in the SIBO, KETO, and PALEO online communities – the labeling of food as good or bad and so much judgement it makes me sick to my stomach.**

I’ve seen the quote “nothing tastes as good as skinny feels.” Well, they’re wrong. Here are some examples of things that are better than being “skinny”:
1) a donut
2) a piece of chocolate cake
3) a pizza

But I think it’s important that everyone – not just those who are struggling with disordered eating or body image issues — realizes the difference between truth and reality. Eating gluten-free is hard enough as it is without putting selfish restrictions and negative food associations into the mix. If you’re struggling, please seek help. Please try to find a happy association with nourishing your body and learn to love the skin you are in. It may be a slow process, but it is so worth it.