We were lucky enough to be part of Celiac Disease Foundation East Valley Chapter‘s (and Gluten Free Calendar’s) night out at The Melting Pot. I had only visited The Melting Pot once before, before my diagnosis, and was curious on how they were going to approach gluten-free dining. I brought Non-GFBF even though he was hesitant at first. He had heard stories that it was an overly romantic restaurant that took like 5 hours to get out of. Well, part of that was true, our whole experience took about 2.5 hours, but it was so worth it. I think he was expecting a man dressed up as cupid serenading each table – not true. They do have adorable little tables with curtains for privacy – but that’s about it on the romance. it’s just awesome food!

Here’s a little review of how dinner went.

When we first walked in we were greeted with free samples of some local gluten-free bakeries! SCORE! I wish every time I went into a restaurant there would be free GF peanut clusters and red velvet cupcakes….

We were presented with a big GF menu that actually had choices! Imagine that – an opportunity to choose (even if it’s just the salad, lobster, or cooking broth).

Our first course cheese fondue – ours was seasoned cheddar cheese fondue. It was made with Redbridge gluten-free beer and the most cheese I’ve ever seen in my life. Damn, I can’t even begin to describe how delicious this fondue was. It came with broccoli, cauliflower, carrots, and granny smith apples. I think the broccoli and the apples were the best. They left out the chunks of bread to fondue, the worcestire sauce (good, it was probably better without!) and the regular beer – converting this to a gluten-free recipe. 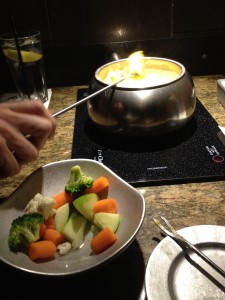 Next up was the salad course. We had two options – a caesar salad or a house salad. We chose the caesar salad because of the parmesan-crusted pine nuts. This was the only thing we liked about the salads. We just didn’t like the caesar dressing. We ate one or two bites and waited patiently for the next course.

Next up was the meat. Oh. My. God. So much meat! We had two options on our special menu, basically with lobster tail, or without. Since we were trying to cut down on excess finances, I think lobster was off the menu. You could also choose the cooking style of your liquid – but we stuck with the typical veggie sauce that came with the meal, as the $7 extra for the Coq au Vin cooking style seemed a little hefty. However, we were served a huge helping of beef, pork, chicken, salmon, and shrimp. I’m still weirded out by the idea of cooking my own meat, and being presented with raw animal flesh, but it is way cool to feel like you’ve actually accomplished something with your dinner. I cooked my own fish – how exciting! They also offered three different gluten-free sauces for the meats. An ginger plum red sauce (we didn’t really care for it), a chive and sour cream-ish sauce that tasted amazing on the pork and salmon, and a thai curry sauce that tasted great on the chicken. Also boiling in our stock was veggies that tasted great with all of the sauces. 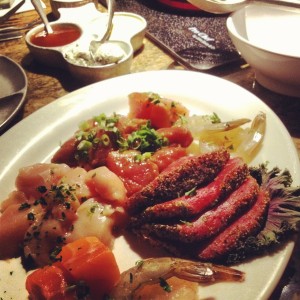 We ate past the point of full and loved every minute of it.

Oh wait, I forgot about the best course – the dessert fondue course! Chocolate fondue might  be my favorite thing ever. Why? Because chocolate is good with anything. If you would have told me that I could cook my meat in that, I probably would have. This menu was extra special though, because instead of just fruit and marshmallows in your GF chocolate fodue, this one had great treats from Danell’s Signature Blend (her peanut chew, cheesecake, and brownie), Julia’s Gluten Free Bakery (and her amazing red velvet cupcakes!). Seriously, this was so amazing. 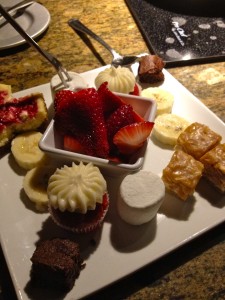 I just don’t know how I was able to leave at the end of the night without being rolled out. I was so full it was almost painful. Non-GFBF, however, took down all 4 courses like a champion. I cannot wait to go back, it was such a fun time and the food was amazing. 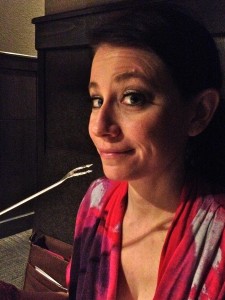 I love the fact that there was a gluten-free menu with a variety of choices online. I think it would be difficult (if not impossible?) if you were going to go to this restaurant with someone else who isn’t eating gluten-free. You’d have to have two separate fondue pots and be very wary that you’re using the right prongs, rescue spoon, etc. I felt perfectly safe with a great waitress and having just one pot that was all GF.

But the Melting Pot isn’t all magic, there were a few negatives to note that I saw (besides the salad, and not being able to split a pot with a non-GF’er).

#1: Price. Our meal was affordable for a 4-course meal ($90 for two people) because of the special night (thank you Melting Pot!), but I’m pretty sure the pricing is higher for a regular night out. From some of the menus I’ve looked at online for my area, the chocolate fondue alone is $16 (serves two people) – so imagine adding three more courses to that. Melting Pot is very much a treat – and your wallet would appreciate it if you treated it like so. But seriously, adorable date night.

#2: Timing. The whole meal took 2 hours and :15 minutes, and we didn’t really lollygag around with our meals or afterwards.  Some people just don’t have patience for a meal that long.

#3: Music. Not sure if it was just my restaurant, but we had the corniest music playing. I wanted it to be more romantic, like jazz, but instead – it was cheesy. We heart a bunch of cheesy covers of romantic music, mixed with Fiest. It was just weird. I wish we had controls in our small booth-like table to turn it down or turn a channel. It took away from the meal.

I would love to go to the Melting Pot again! I would recommend it for a really nice gluten-free date night where you can have plenty of conversation and eat an intense amount of food!

Because of the sub-par salad experience, high pricing, and lack of appropriate music, I’m giving the experience a 4. I would recommend Melting Pot, but make sure you save up for the experience, and go hungry!