I recently had a chance to go down to Tucson to see Dr. Rodney Ford (Dr. Gluten) talk about his new book Gluten: Zero Global and his views on gluten. This event was sponsored by the Southern Arizona Celiac Support Group, CSA/USA Chapter 15. A special shout-out to one of our readers, Kim Provo Pebley who gave an introductory speech to the event, and is just an awesome lady. I’m glad we finally got to connect in person!

Before the event, I was told there’d be an awesome silent auction, and they weren’t kidding! SACS had an awesome array of gluten-free goodies that were lovingly donated, and we opened up our pocketbooks to support SACS and to score some great goodies! Here are some great things that I bid on that I loved (although I only won two!).

Dr. Rodney Ford was amazing to listen to. I scribbled down many notes, and I’ll give you my feedback on it, but I would definitely recommend you hearing him talk and buying his book if you’re at least minimally interested in what he has to say.

He’s a pediatric gastroenterologist. He’s written many many books on gluten and how it’s bad for so many people – not just celiacs!Gluten is such a terrible molecule that no one should be eating it. I always thought that if the tests came back negative for Celiac disease, that I could continue to eat gluten. But he says that everyone should try gluten-free for some time, regardless of the test results, as he’s seen many many people that haven’t been confirmed Celiac that have sensitivity to gluten. His view is “any person, any symtom, any time.” He thinks if you suspect gluten sensitivity or Celiac to go gluten zero – no gluten at all. He’s seen many people that won’t change their diet or food intake unless they are in a crisis or have a positive test – so it seems like he’s hesitant to rely on test results to show that you can feel better and be better without gluten. Gluten, who needs it!?!! He also recommended the book Wheat Belly by William Davis which I haven’t read, but really should!

One thing that was really difficult for me to hear was that he isn’t happy with the FDA rule of 20 ppm. He thinks no one should be happy with eating that much gluten. He wants the gluten-free community to demand ZERO gluten. If there’s a manufacturer that says it’s below 20 ppm gluten, don’t buy it. However, that’s where my brain blew up. How am I supposed to eat food if I don’t eat food that is just processed in a completely gluten-free facility? How am I supposed to find a restaurant that is ONLY gluten-free – not just offers a gluten-free menu? My life is already hard to eat, how could I do that? I struggle with that still, but in the end, he’s right. If we demand products to be manufactured in their own GF facilities and only give our money to GF restaurants, then they will flourish with our disposable income. Problem is, is that if everyone thinks this is a fad diet still, that we still get mocked and ridiculed by the media or chefs. Until this is legitimized by medical professionals and the media respects us, how can we demand it? I don’t know, I’m still trying to wrap my head around it, and what I can do to make the world zero gluten. Until then, I will try TRY try to make sure that I’m giving my hard-earned dollars to companies that really GET how to do gluten-free the right way. 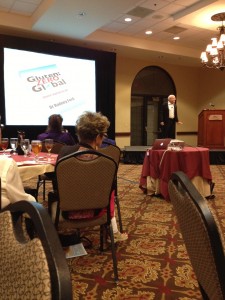 Another great thing he talks about is the connection between the brain and the gut (yes, he’s wearing an apron that explains the nerves in the digestive system) – and the ramifications of gluten damage in the brain and nervous system. I found this out first-hand when I had a paralyzed vagus nerve that prevented me from digesting food properly. Now that I’ve been gluten-free, my stomach is functioning at a high enough level where I don’t need medication daily. Huzzah! 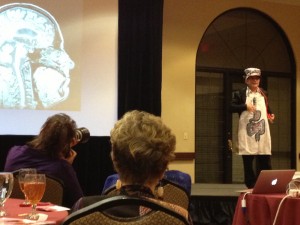 Overall, we had a great time, and I really feel good about making GFBF (formerly Non-GFBF) go gluten-free since we live together. Gluten, bad for everyone (but especially anyone that lives with me ha). He said that our job is to go out there and spread the message that gluten is bad, and we can’t wait for the government to act, we need to go and start a revolution. We need to demand gluten-free food and gluten-free facilities and gluten-free restaurants. So this is my rallying cry – be an advocate for yourself and for others like you! 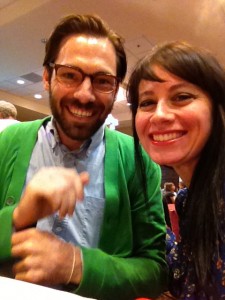 PS driving home we passed a hybrid sorghum field north of Tucson and I took a minute to give it some gluten-free love. We took some great photos – I love them. Thanks for the great lipstick Red Apple Lipstick! 🙂 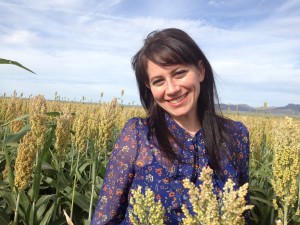