First, I’d like to thank the National Foundation for Celiac Awareness (NFCA) for being an amazing organization that has really helped me through my first few years of going gluten free with celiac disease.

Second, I’d like to thank Blue Diamond (you know, the Nut Thins guys) and Go Veggie! faux cheese for putting on a cool promotion with NFCA. I always love doing these promotions because it always turns me on to new products for you guys. Due to the overwhelming response of the sneak peek of my use of GO Veggie! dairy-free cheese (shredded, cream cheese, powdered parmesan), and my new Artisan Nut Thins on Instagram, I just know you’ll love these products as much as I did.

Instead of the typical party fare, I wanted to be able to create 1) something unique and 2) something craveable. I was sick of going to parties and only bringing gluten-free cupcakes with me. You can only eat so many cupcakes without looking at the other party food and becoming jealous I wanted something more substantial – and something that I could also transfer to every day use. After avoiding straight-up dairy (I still have it in products – like in the Artisan Blue Diamond crackers), I can’t eat a block of cheddar cheese like I used to (and believe me – I used to). So, I created a “mostly” dairy-free baked mac & cheese entree. This would be delicious either 100% dairy-free or 100% not dairy-free too – making modifications as needed.

I based my experiment on the wonderful Kelly Rudnicki’s Food Allergy Mama’s dairy-free mac and cheese recipe found here.

First I started preparing my ingredients. I used:

First I made the quinoa noodles as per directions on the box. While the noodles were cooking, I crushed up the Blue Diamond Artisan Nut Thins. I used a muddler because that’s all we had on hand – and it was really fun! I crushed the crackers up to make a crunchy topping on the baked mac & cheese.

After the pasta was done, I combined the gluten-free roux with the pasta and the GO Veggie! mexican style shreds. 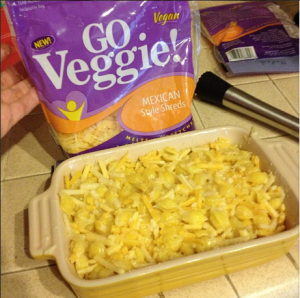 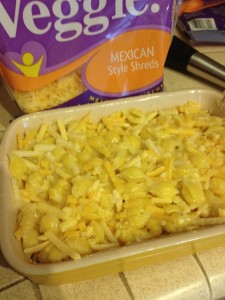 When everything was mixed in and put into the casserole dish, I sprinkled the crushed crackers on top and put it in the oven at 350 degrees until the cheese had melted. This not only melts the cheese within the casserole, but it seals the crackers to the mac and cheese! 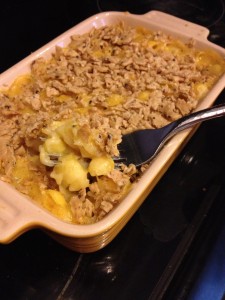 These would be super fun to make in small silicone baking cups or mini-tarte pans for a single-serve appetizer at parties.

But why stop the party with just those uses? Let’s talk about some of the other products I had a chance to use during the Summer Block Party. 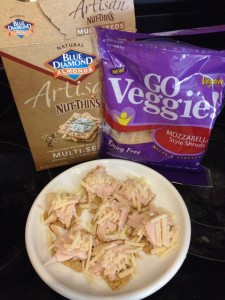 Use: Filling (with basil) for a proscuitto wrapped chicken breast. 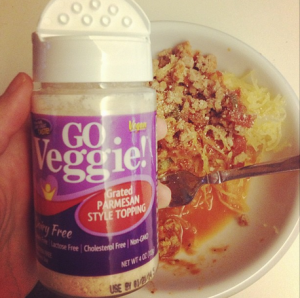 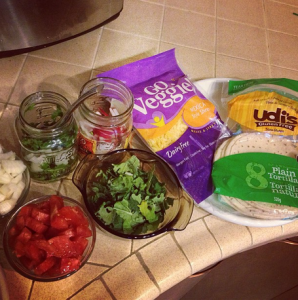 Use: patty pan pizzas baked in the oven 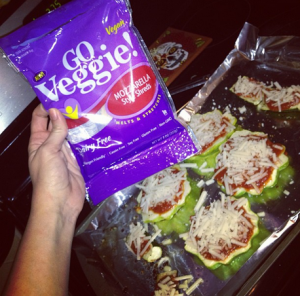 Use: Perfect for dipping at a party (with gluten-free only stickers of course!). The non-GF people in the party had NO idea that this cracker was gluten free – and when they found out they even liked it! 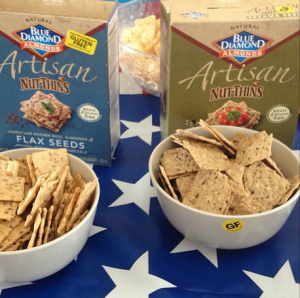 Thanks again to NFCA and Blue Diamond and GO Veggie! for letting me sample these great products and coming up with fun recipes using these products! It’s super easy to make gluten-free products that are perfect for any gluten-free-friendly party!