What If My Celiac Gene Test Is Positive?

The links throughout are refer-a-friend links, not affiliate links, to 23andMe.com if you’re interested in purchasing your own health report. 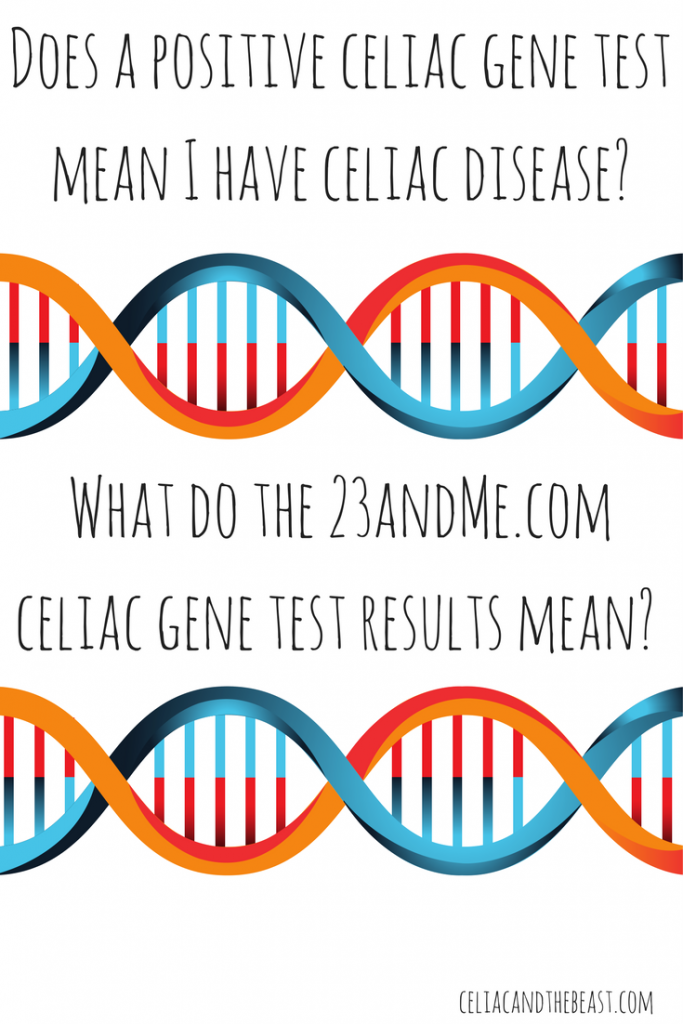 So you have a positive celiac gene test from 23andMe.com. What now?

Well, 23andMe is thankfully really accurate when it comes to explaining celiac disease in the test results.

They say this test “does not test for all possible variants, genes, or haplotypes associated with celiac disease.” We know that the majority of celiac disease patients have either DQ 2.5 or DQ 8 genes. However, there is still more to be told of the celiac story. It’s stated that “95% of all cases of celiac disease are associated with the HLA-DQ2.5 and HLA-DQ8 haplotypes.” Are you those lucky 5% without the genes that were diagnosed with a blood screener and biopsy? I know at least two people who are!

23andMe.com also says that the test “does not cover other potential gluten- or wheat-related conditions.” This is accurate because non celiac wheat sensitivity (known previously as non celiac gluten sensitivity or gluten sensitivity) is not found in genes, and an IgE blood test and symptoms will reveal a true food allergy to wheat (aka use an EpiPen).

23andMe states that only about 3% of people with one or more copies of the HLA-DQ2.5 or HLA-DQ8 haplotypes develop celiac disease, and about 30% of the general population can carry these genes. This is why the gene test is used alongside with the blood screener and the gold standard (upper endoscopy biopsy) to diagnose celiac. Just because you have the genes does not mean that you currently have celiac disease or will develop celiac disease. And yes, celiac can develop any time – often trigged by sickness, pregnancy, surgery, car accidents and extreme stress. Or…just life!

Again, a positive celiac gene test with 23andMe.com or any other doctor who can order a celiac gene test, does NOT mean that you have celiac or will have celiac in the future. It’s important to follow proper diagnostic protocol if you think you have celiac disease – a blood screen and an upper endoscopy while still eating gluten. Check out this blog post for more information: http://celiacandthebeast.com/2014/06/celiac_disease_testing_screening/