Food and Beverage, ReviewAugust 22, 2018No comments

I had a great time at the GFF Magazine Dream Dining Series at Barton G in Los Angeles. The one day trip to Los Angeles was full of friends, food, and entertainment. I’ll post about the LA-based bakeries and restaurants later, right now let’s talk about the event. GFF Magazine is hosting a series of dream dinners across the country.The first one took place in Los Angeles. It’s not my favorite city to visit – LAX sucks, traffic is a nightmare, and I’ve never had great luck eating there (more on this later). I like to spend most of my time in Southern California in Orange County – in places like Anaheim (and Disneyland) Irvine, and Newport Beach), or San Diego, or even Pasadena (since I’m there at least once a year for the Celiac Disease Foundation Expo). However, I couldn’t pass up a trip to LA for this event – especially since it’s a 45 minute flight on Southwest Airlines! 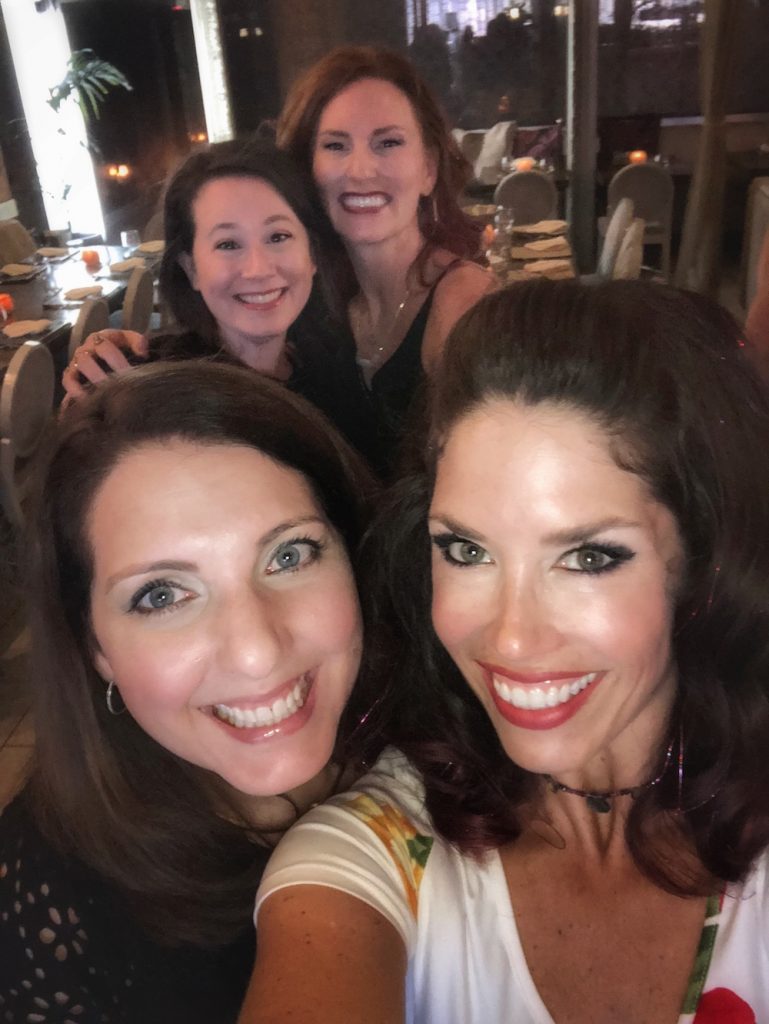 Thankfully I got to meet up with old friends, KC (aka G-Free Foodie), Kyra (aka Cupcake Wars Winning Champion of all things GF and head cupcake in charge at Kyra’s Bake Shop), and Alison of Ginger & Fox Bake Shop and A Girl Defloured. 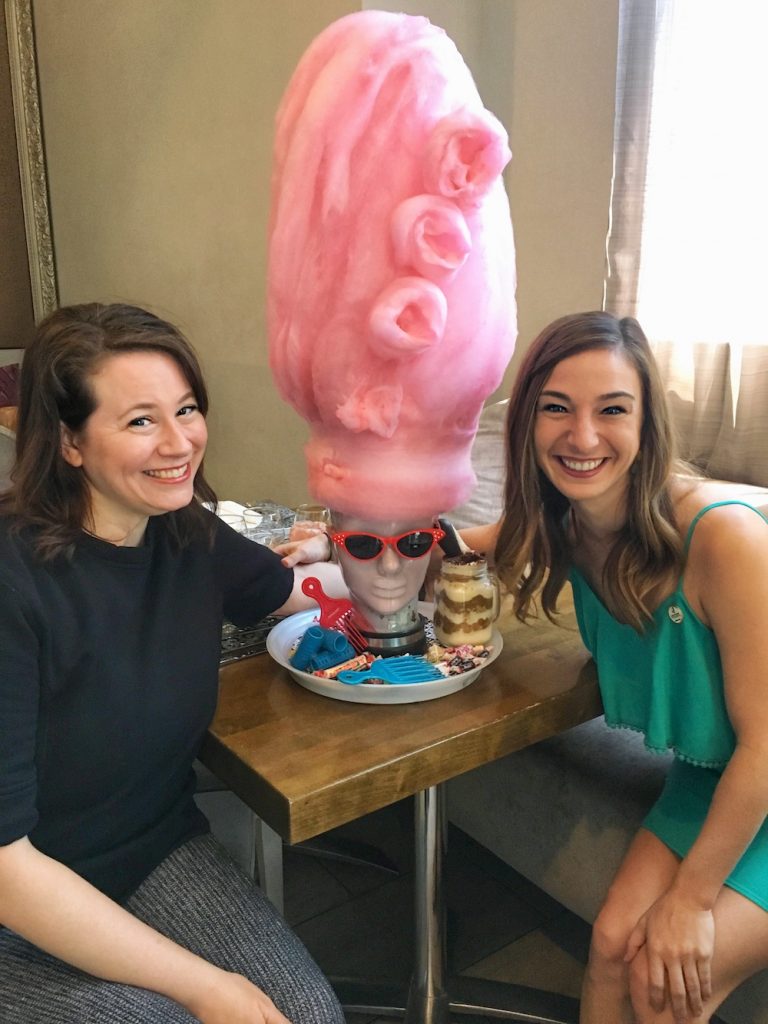 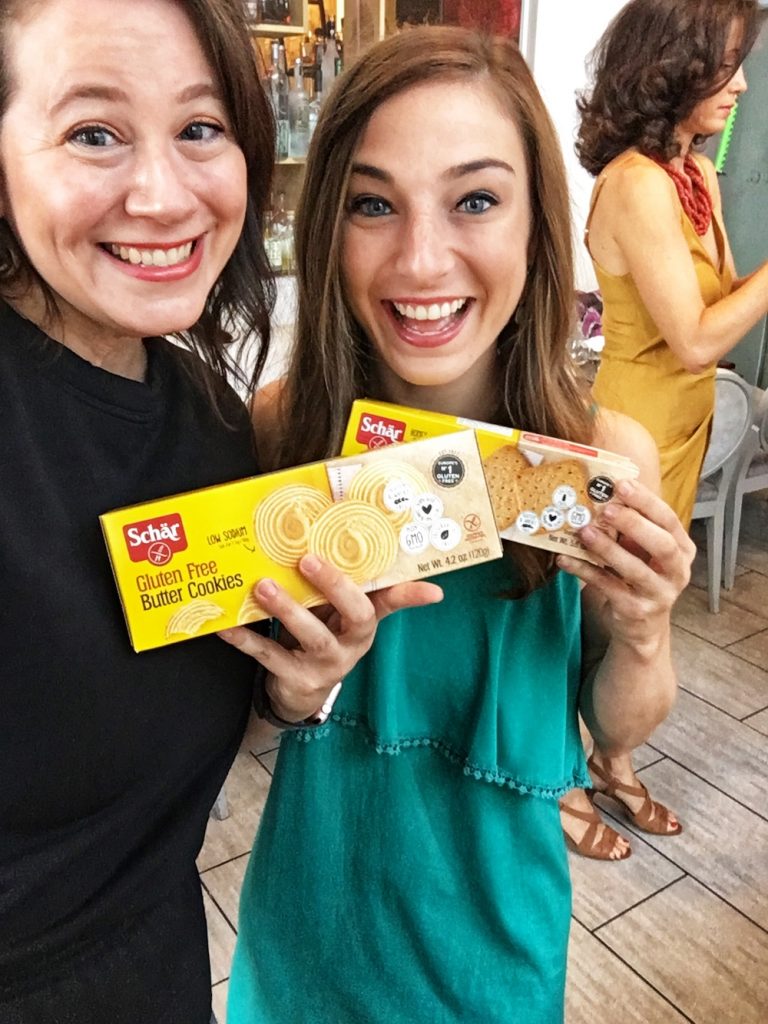 I also go to see a familiar face from Celiac Disease Foundation – Laura! Marilyn Geller from CDF was also a superstar at the event. We’re so excited to nom on some great Schar products during the event. Schar products were integrated into almost every part of the 10-course meal. 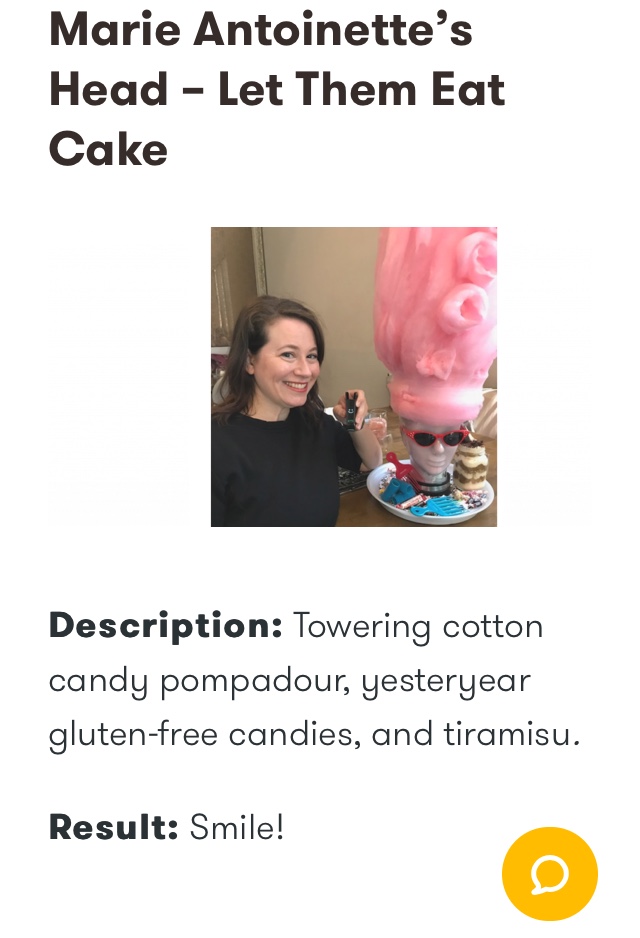 And of course, since Nima Sensor  (affiliate) was a sponsor, everything was Nima Sensor tested. On top of the million celiac people that were working with Barton G in advance of the event, it was a nice added layer of security. 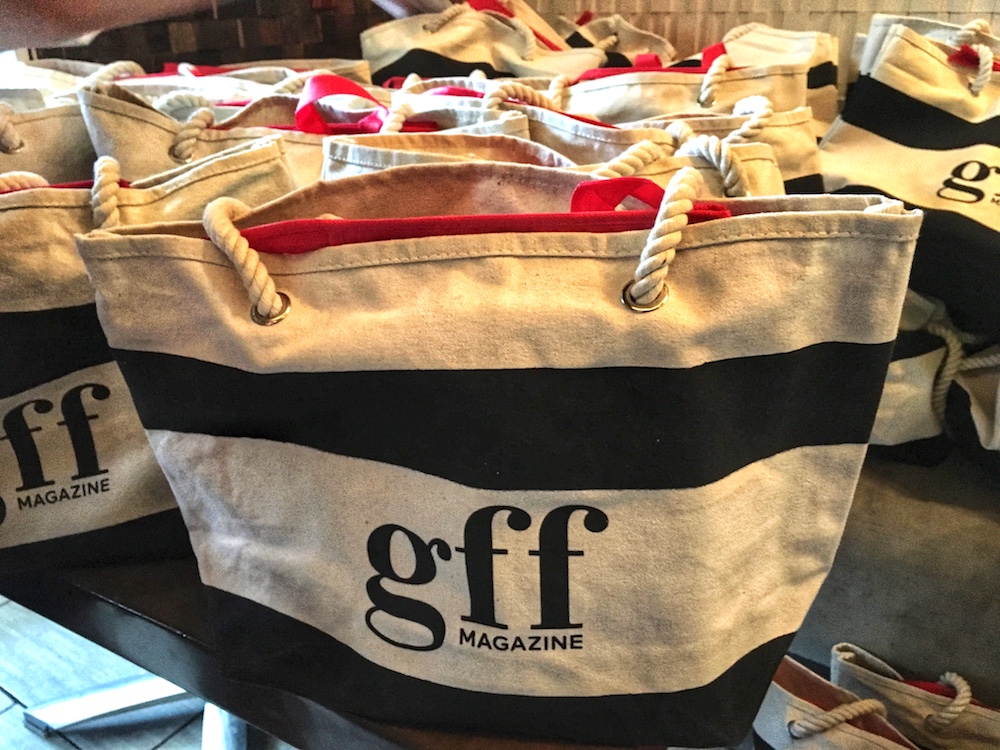 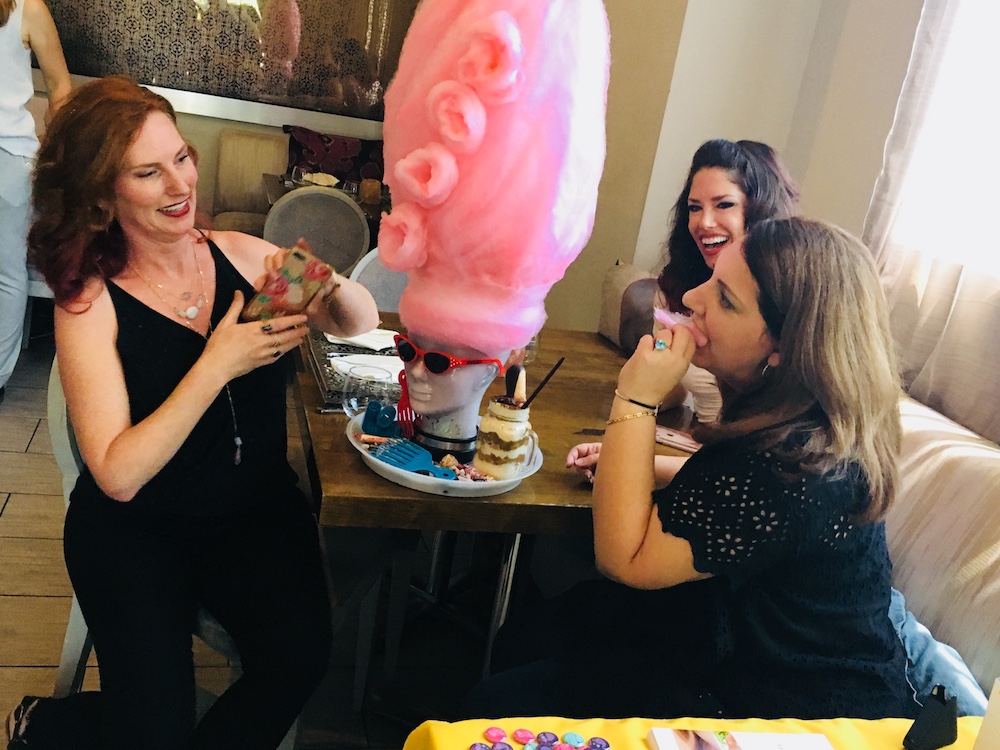 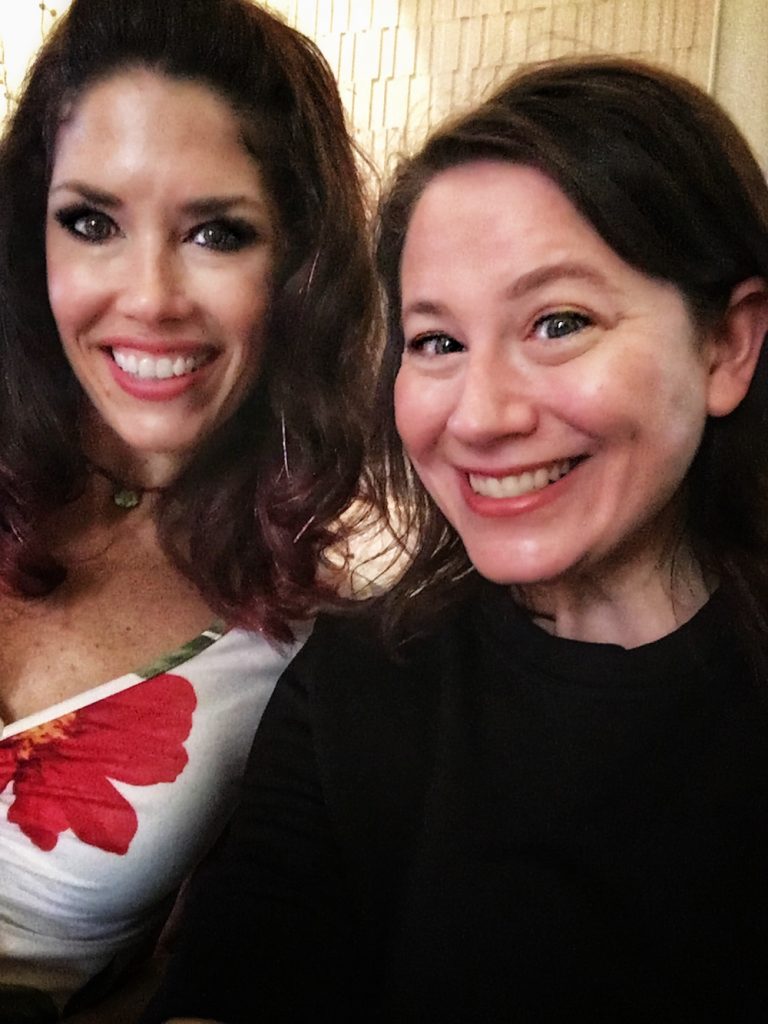 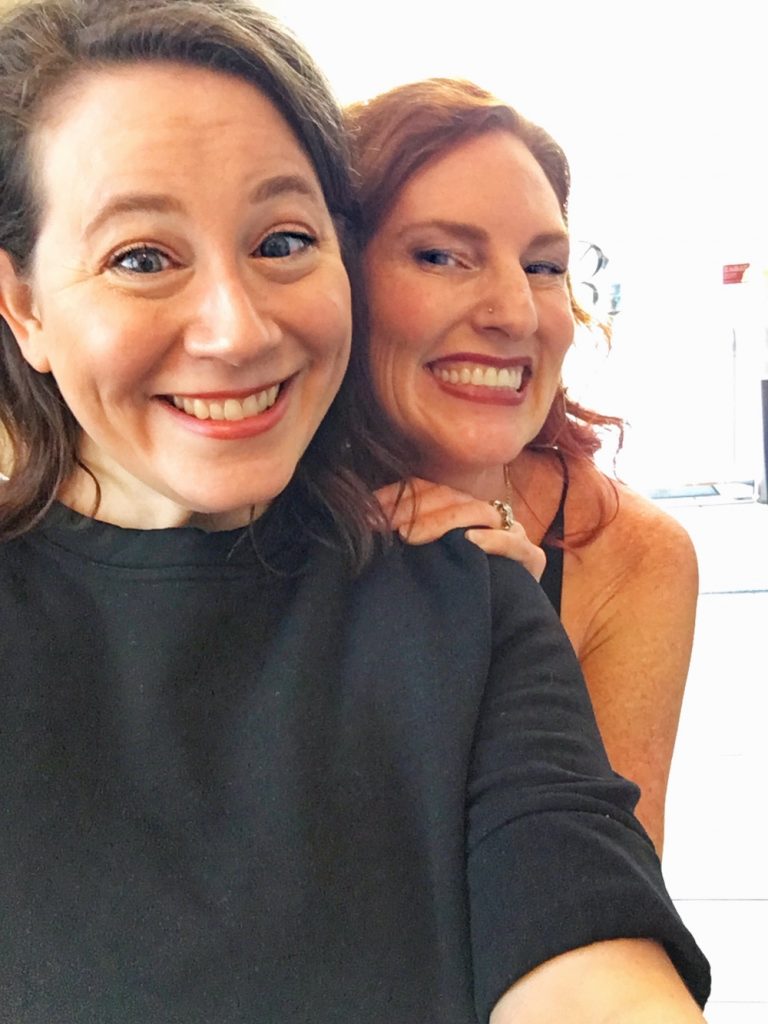 Now, Barton G is not necessarily a restaurant I would have visited on my own without this event. It’s whole schtick is over-the-top food entertainment. Every meal and drink is served absurdly – using props and tongue-in-cheek humor and larger-than-life serving platforms. Drinks came with dry ice – one even was served on a tricked-out Etch a Sketch, or in a lantern, or out of a iron dragon head. I mean, this restaurant was an experience to say the least. 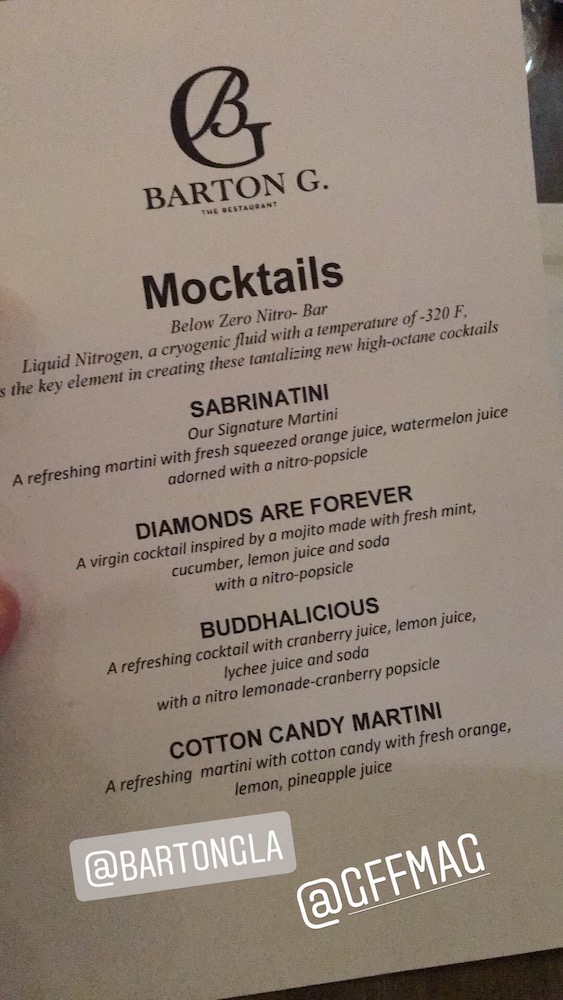 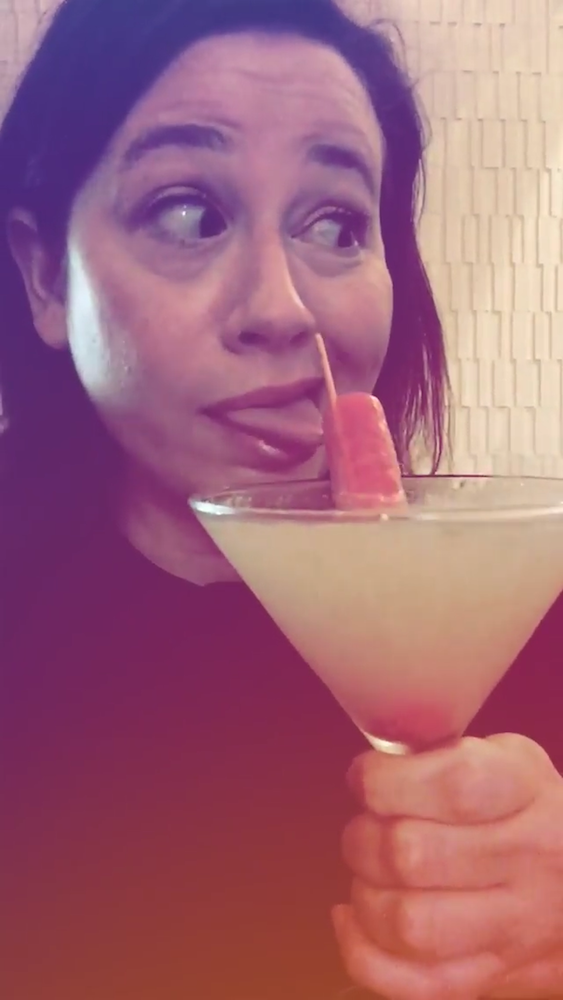 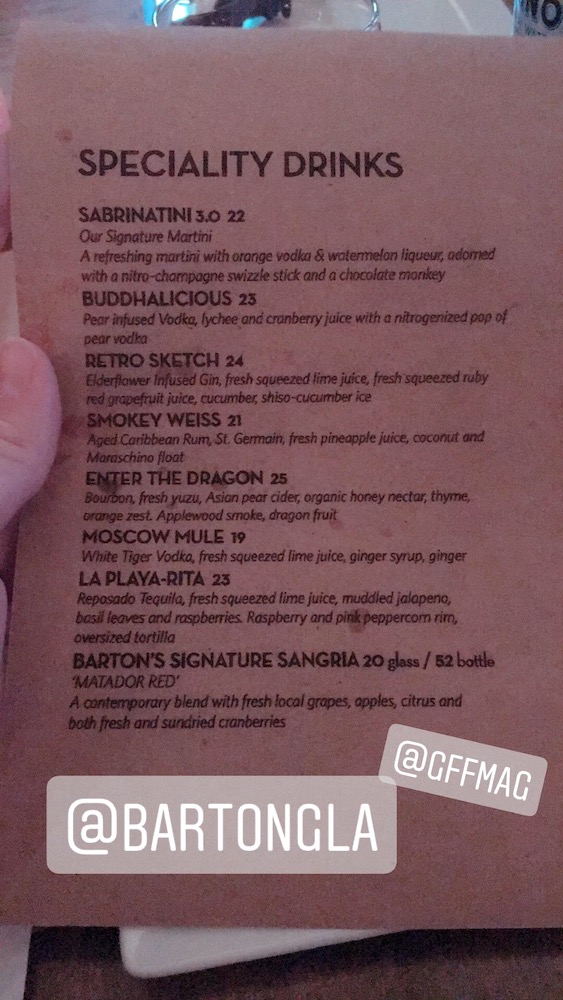 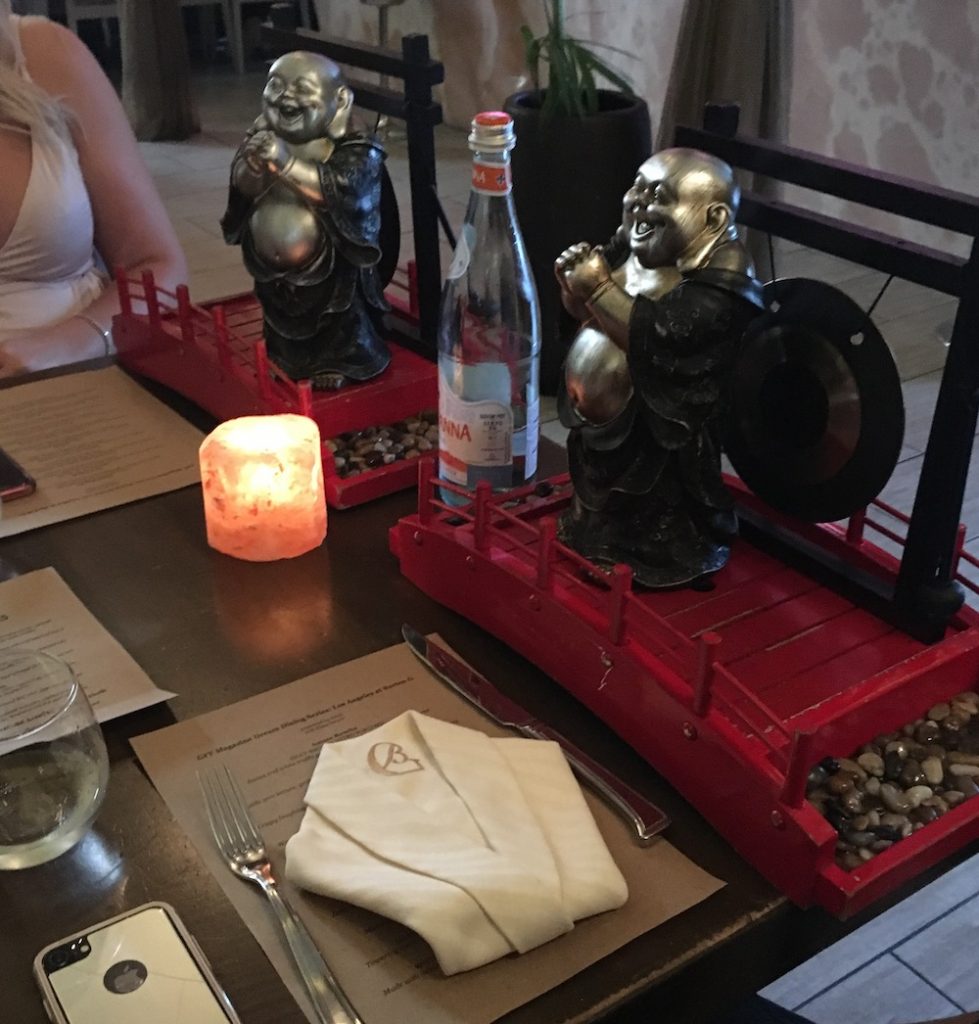 Everything seemed to be plated for Instagram, which was strange because the restaurant was dark AF, so most of the photos I took didn’t pan out. There was one good table that got lighting from one long window. All of their photos turned out way better than mine, and really captured the fantastic absurdity of the restaurant.

When the #glutenfree magazine that gives you gourmet culinary inspiration (yes, you @gffmag!) teams up with @scharglutenfree and @nimasensor to host a completely #gfree lunch at @bartongla, you make sure to get a ticket! 🏃‍♀️ . What a fabulous meal they created with so many of the dishes I normally can’t indulge in: 🍿nitro popcorn 🥗🥖Caesar salad WITH crostini 🍤 popcorn shrimp 🍔 mini Wagyu beef sliders 🐠moonfish 🥩🍟 ribeye steak with bone marrow butter and truffle fries (yay!) 🍗 jerk chicken 🍜🧀lobster mac and cheese 🍬cotton candy towers with tiramisu 🍰white chocolate raspberry bread pudding (yes, this takes the cake!) . Thanks to all for sharIng a delicious meal where we didn’t have to ask the servers a single question and got to enjoy great company! 🙏🏻 . . . #gffmag #dreamdining #gfreefoodie #glutenfreelifestyle #glutenfreeindulgence #glutenfreecommunity #laeats #lafoodies #glutenfreeeats

I was so excited to try the menu until food started coming out and I realized that I couldn’t eat most of it because I am still dairy-free. I was okay with just having a drink and hanging out with friends, but Barton G was like “nah girl, you’re good” and managed to bring me individual portions of everything – made dairy-free. By the time the main entrees started coming out I had to tell the chef to stop bringing me so many things! I could have survived alone on the salad with grilled Schar baguette crostini and the laughing bird popcorn shrimp. I ate a big bowl of each! I asked for the Don’t Be a Jerk chicken, served with pickled peaches and avocados – SO yummy. I wish I could have taken a doggie bag home with me, but I didn’t think it would make it onto the plane! 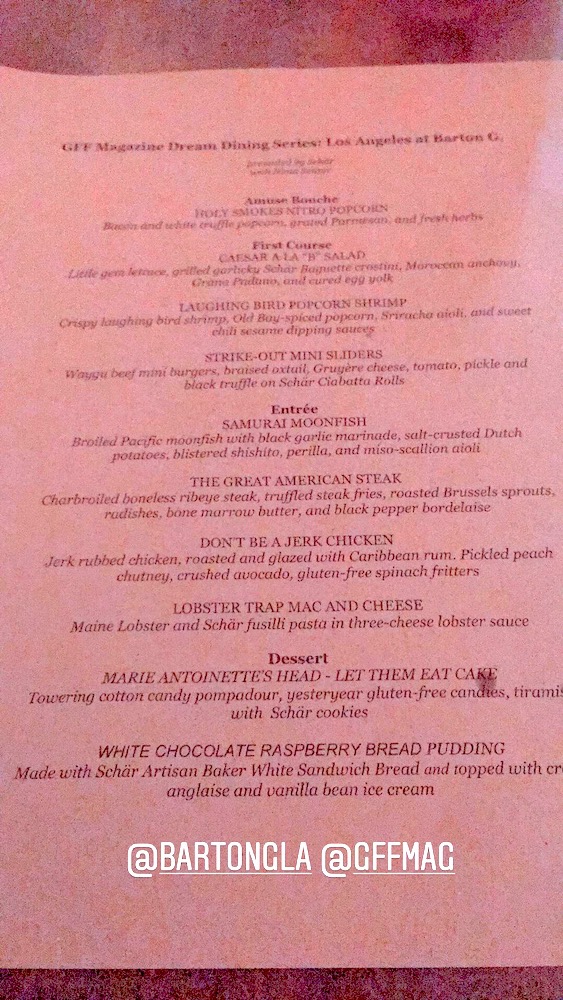 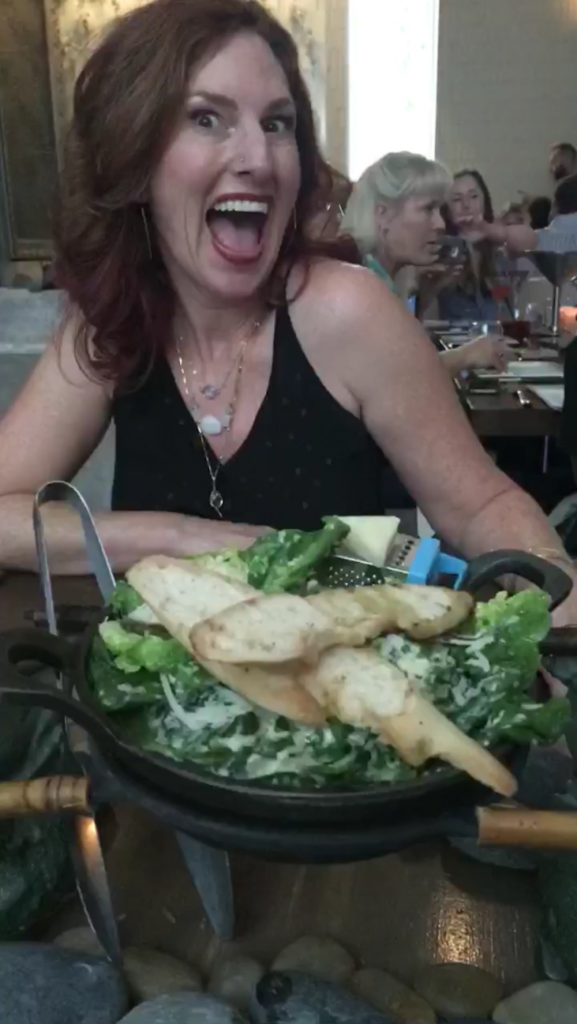 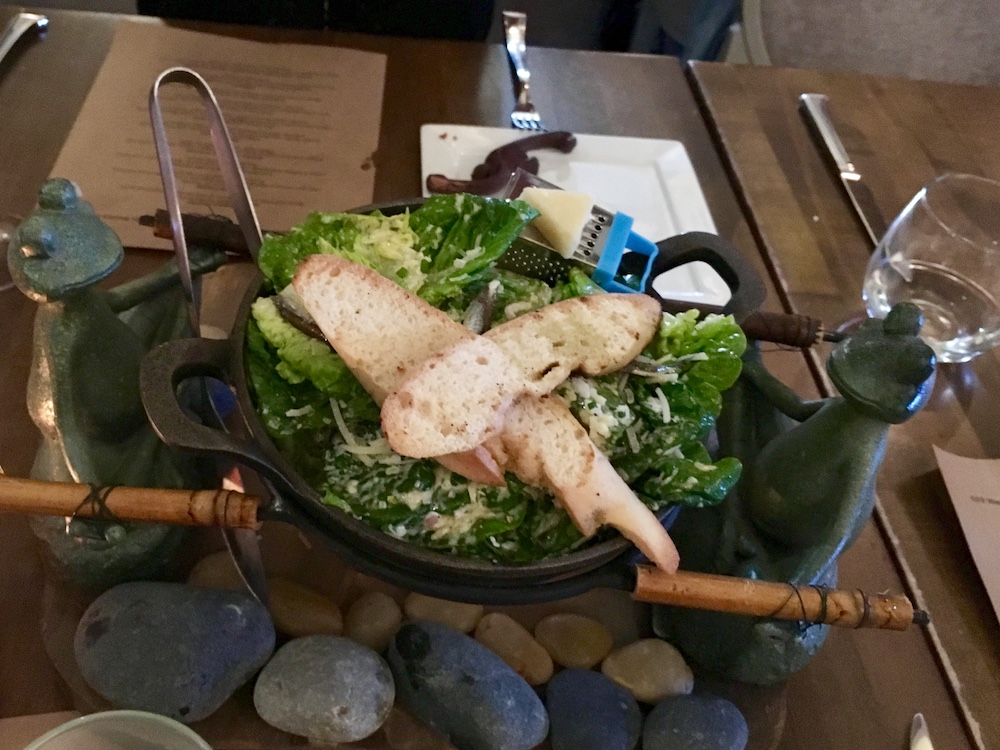 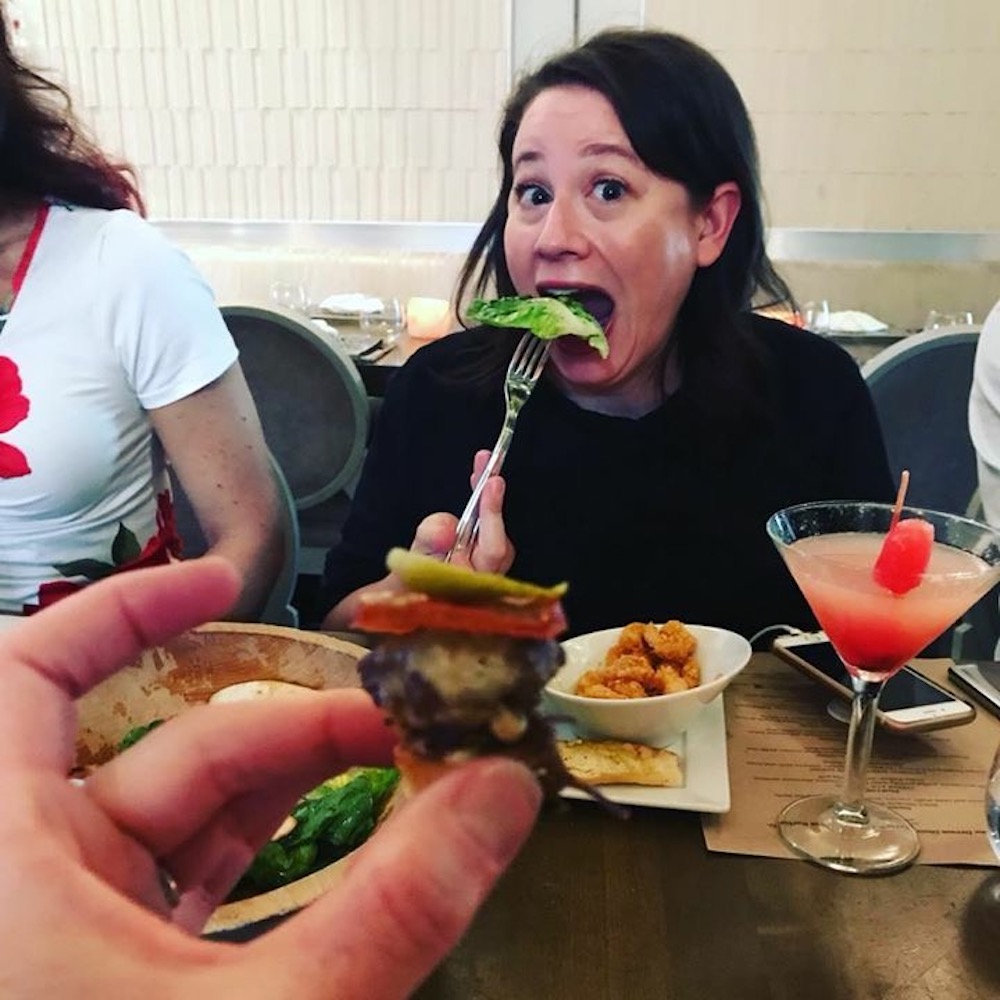 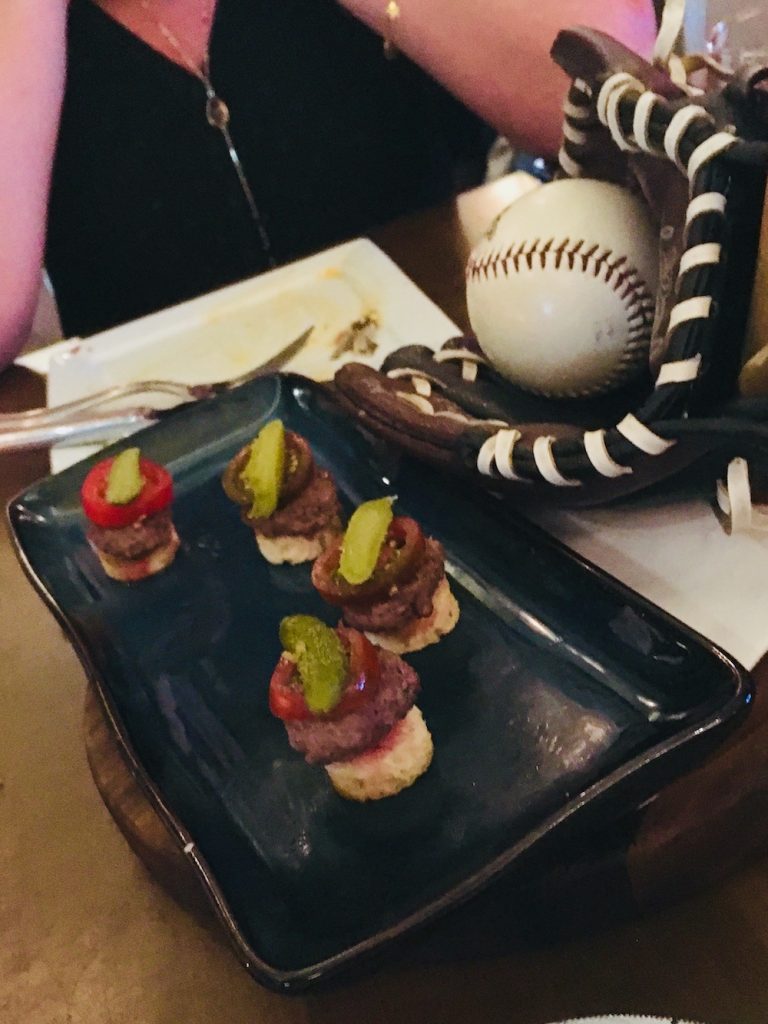 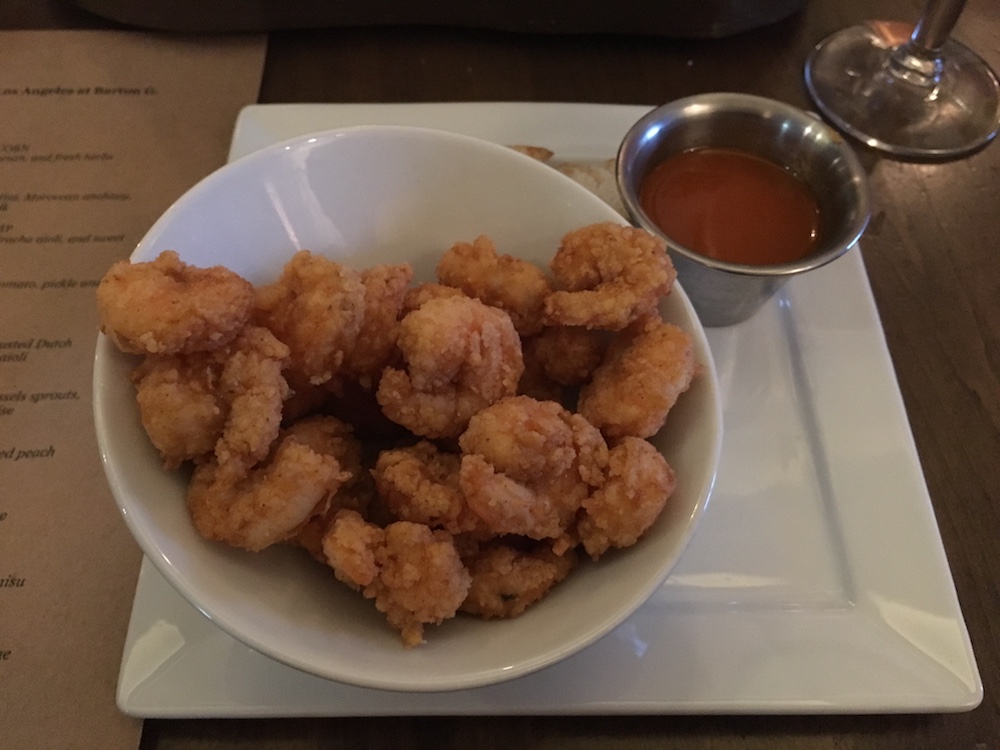 When it was time for dessert, I thought that I was just going to eat the Marie Antoinette cotton candy head – which, by the way, I was waiting for all night. But, in a surprise, the Barton G LA team was in the back making a dairy-free version of the tiramisu “milk” shake that everyone else had. It was possibly the most delicious thing I’ve had in ages. I wish I had a second stomach just for this part of the meal. 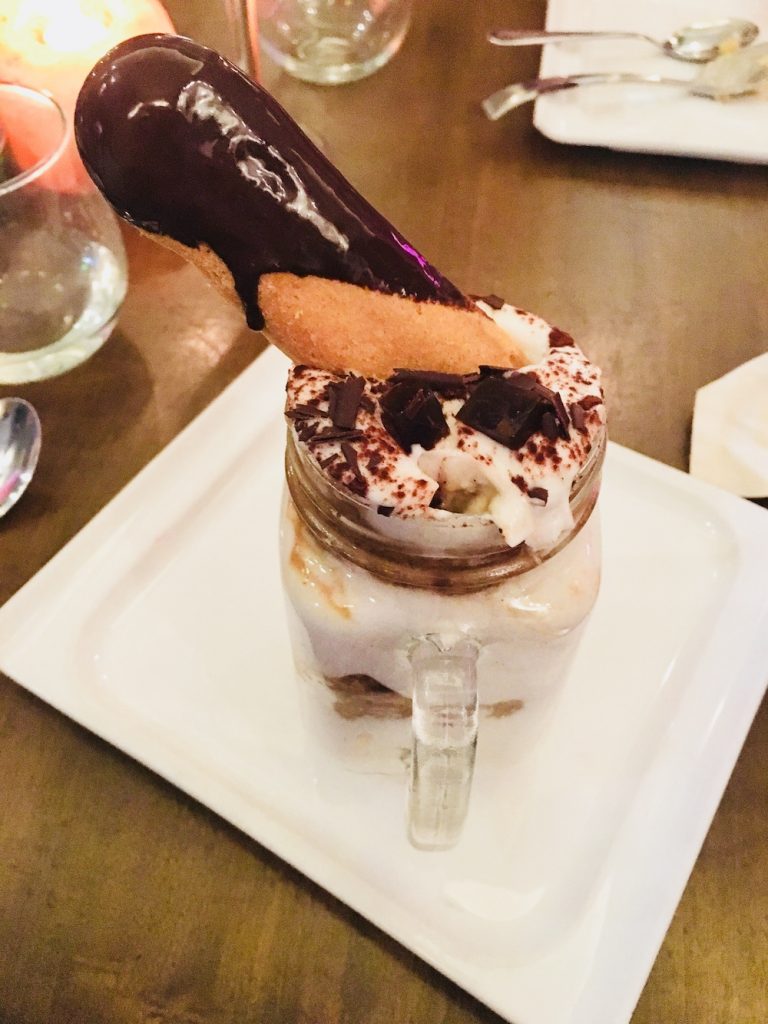 I can’t explain to you how delicious this meal was! As a gluten-free blogger, I am so happy I bought a ticket to this event. Not only do I get to eat all the amazing things, but pass along a great new restaurant recommendation to you for Los Angeles. Barton G was very accommodating with a celiac-safe diet and dairy-free offerings. While the meal was over-the-top and silly and crazy, above all it was delicious. And the wait staff was so friendly and accommodating. 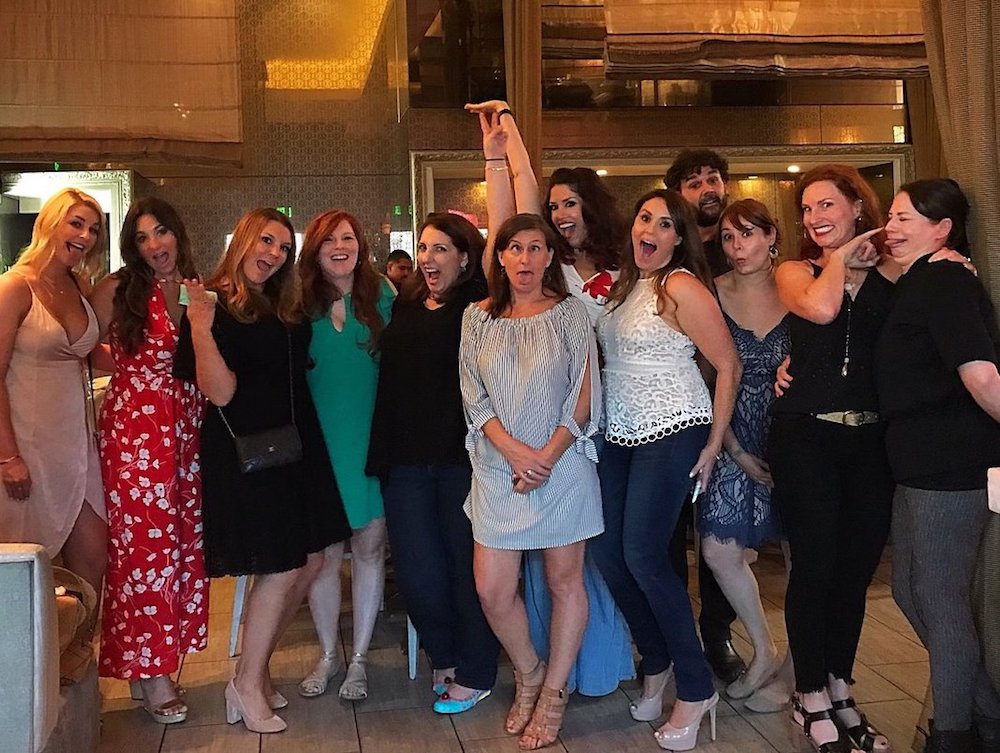 I can’t wait to see you all in Chicago!