If you have celiac disease, like I do, you’re probably waiting for the day for our disease to be “cured,” or at least have some pharmaceutical intervention. I mean, lactose intolerant folks just take a pill – what about us? Well, celiac disease is a very serious autoimmune disease, not a simple intolerance – so as you can guess drugs are a bit more complicated. But even as we’re seeing food allergies navigate pharmaceutical interventions, those with celiac are on the cusp of a cure – or at least a pill or shot to help us along the way. Unfortunately, there is no natural cure for celiac disease, but I for one can’t wait for a celiac disease drug.

PS if you’re wondering why I recommend clinical trials, read my blog about paying it forward to the next generations of celiacs!

I’ll try to update these as new data comes in from Clinical Trials, journals, and Digestive Disease Week. 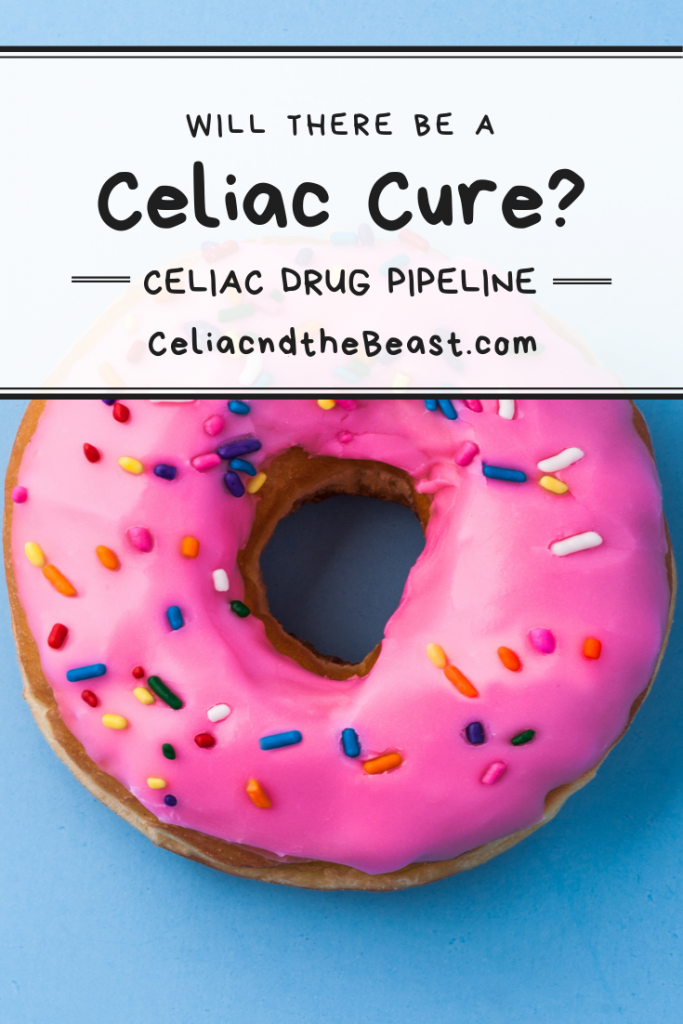 Why Care About a Cure?

Sure, you may be killing it on a gluten-free diet. You may not want a cure, or even a pill. Heck, if you could eat gluten again tomorrow, some of you would still stick to a gluten-free diet. But you’ve got to remember that you’re just one person. One in one hundred people have celiac disease and you can’t speak for all of them. There are those with celiac disease who are really struggling. Those who can’t make it a day without accidental gluten exposure. Those who have refractory celiac disease. Those with other issues that can’t handle one more issue like celiac disease on their plate. So, instead of poo-poo’ing the race for a celiac cure, think about how great it will be to be able to help those that want to see a drug, shot, or cure for celiac disease.

Front-Runners for the Race for a Celiac Cure 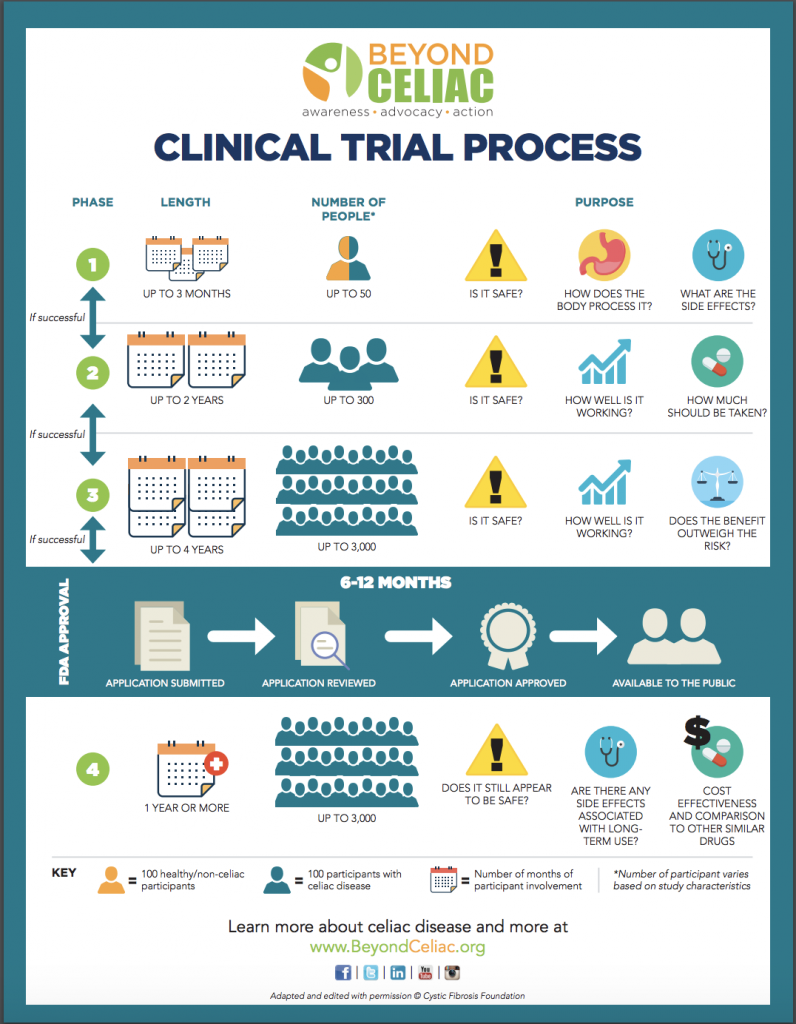 Clinical Trials Process from Beyond Celiac – CLICK TO LEARN MORE

Who is it: Amgen in collaboration with Provention Bio (PRV-015) (formerly with Celimmune)

According to Science Daily, “Researchers found that the AMG 714 antibody, which blocks interleukin 15, an important mediator of celiac disease, leads to fewer symptoms following gluten exposure. “It’s important to note that this drug is being investigated for its potential to protect against modest contamination, not deliberately eating large amounts of gluten, like bread or pasta,” said Francisco Leon, MD, PhD, the study director and consultant for Amgen. “Contamination, which can happen during food processing or packaging, during cooking, or due to inadequate labelling, is known to occur very frequently, despite following a gluten-free diet. Our hope is that this drug may allow celiac patients on a gluten-free diet to experience fewer gluten-triggered events.””

Who is it: Immunogenx, Immunogenics (formerly Alvine ALV-003)

What is it: Enzymes that degrade gluten in the stomach

As per Pipeline Review, The trial will test the safety and efficacy of the company’s lead therapeutic candidate Latiglutenase for the protection of intestinal health and the reduction of symptoms in the presence of a 6 week gluten challenge treatment period. Key endpoints include: (i) intestinal health measured by villous height to crypt depth ratio (Vh:Cd) from a biopsy at the beginning and end of the treatment period, (ii) symptom response utilizing a daily diary measuring the severity of 6 gluten-induced symptoms, and (iii) intestinal health as measured by the diagnostic method CypCel™, which uses simvastatin as a biomarker for villous degradation. Urine samples will also be collected periodically to measure gluten content for the placebo vs. latiglutenase arms during the gluten challenge period. This work builds off of positive results reported for Latiglutenase (Syage et al. Dig. Dis. & Sci. 2017) and for CypCel (Moron, Am J Gastroenterol 2013). Further information can be found on celiacshield.com.

What is it: An immune-modulating vaccine for DQ2.5 patients only, like allergy shots

Update: NexVax2 has been discontinued as of June 2019. It’s particularly sad because they had just announced great results at Digestive Disease Week this year. According to Beyond Celiac, The RESET CeD trial of Nexvax 2 has been discontinued after an early look at results showed it did not provide meaningful protection from gluten exposure compared to a placebo. The disappointing end of the trial, which had enrolled about 150 participants, failed to achieve the intended outcome of the trial was noted in statement by ImmusanT.

A lot of you have been asking about celiac vaccine news, and Nexvax2 is getting the most press. According to Immusant.com, “Nexvax2® is the only disease-modifying therapeutic approach for celiac disease in clinical development today that has the potential to enable patients to return to a normal diet, good health, and improved quality of life. Nexvax2®is a combination of three proprietary peptides that elicit an immune response in patients with celiac disease (CeD) who carry the immune recognition gene, HLA-DQ2.5, which accounts for the condition in 80% to 90% of patients. Nexvax2® is delivered intradermally as a therapeutic vaccine and reprograms the T-cells that respond to gluten antigens in CeD patients so that they stop responding defensively by triggering a pro-inflammatory response. As a result, by preventing T-cells from continuing to cause inflammation in the small intestine, the injured tissue heals and patients would be able to resume an unrestricted diet and enjoy improved health. Booster shots of Nexvax2®would offer periodic reinforcements of the treatment to establish a prolonged tolerance to gluten.” See more information on a press release on Business Wire. Also, check out this real-life detailed story of what went on during one participants Nexvax2 clinical trial from Gluten-Free Living Magazine.

What is it: tight junction regulator, helps restore “leaky gut” – for accidental gluten consumption, taken prior to a meal

According to Innovate Biopharmaceuticals, “Larazotide acetate or INN-202 is Innovate’s leading drug candidate for celiac disease (CeD) entering phase 3 clinical trials. INN-202 is a tight junction regulator, which helps restore “leaky” or open junctions to a normal state. In CeD patients, ingestion of gluten causes disruption or opening of the tight junctions. The open junctions cause an inflammatory cascade within the intestinal epithelium that eventually destroys the intestinal villi, decreasing the surface area for absorption of nutrients, thus leading to a variety of diseases. When ingested prior to a meal, larazotide may help keep the tight junctions closed, thus reducing the intestinal-inflammatory process in response to gluten.” Things are currently looking good, as the drug reduced signs and symptoms compared to those just on a gluten-free diet alone.

Who is it: COUR Pharmaceuticals

What is it: IV drug, immune modulating, tolerizing the body to gluten

According to Cour Pharmaceuticals, “TIMP-GLIA seeks to prevent these long-term and severe conditions by tolerizing the body to gluten. Using Cour’s novel technology for TIMP-GLIA, the body is reprogrammed to recognize gluten as a non-threatening substance and subsequently abrogates/reverses the signs and symptoms of celiac disease.”

The 2b clinical trial shows that 34 patients with celiac were involved in a research trial. Those who were given CNP-101 showed 90% less immune inflammation than those in the placebo group.

“Called CNP-101/Tak-101, the biodegradable nanoparticles form a “friendly shell” containing the fragments of the gliadin portion of gluten. When the nanoparticle is injected into the bloodstream, the immune system does not respond because it sees the particle as “innocuous debris.” The nanoparticle and its hidden cargo are then consumed by a kind of vacuum-cleaner cell in the body.”

Who is it: PvP Biologics, Inc.  and Takeda Pharmaceuticals

What is it: Enzyme that breaks down gluten, for accidental ingestion

According to PVP Biologics, “Our mission is to develop a highly-effective therapeutic product to reduce the burden of living with celiac disease. Towards this end, we are advancing a product candidate designed to break down the immuno-reactive parts of gluten in the stomach and thereby avoid the painful symptoms and damage done in the small intestine from accidental gluten ingestion. KumaMax is a uniquely engineered, recombinant enzyme that is active under acidic stomach conditions and has high specificity for the parts of gluten that trigger the autoimmune reaction leading to celiac disease. For celiac patients attempting to maintain a gluten-free diet but who may accidentally ingest gluten, KumaMax has the potential to degrade the immune-reactive parts of gluten before they exit the stomach in order to decrease the immune response to gluten and reduce the symptoms and intestinal damage associated with celiac disease.”

I’m asking you to be respectful in the comments, but I also want to know about your thoughts on celiac disease pharmaceuticals. Which are you most likely to take – a pill to prevent cross contamination, a pill to freely eat gluten, a shot to eat gluten? What are YOUR thoughts on a cure for celiac disease?