Expo West 2015 was one for the books. It was the biggest and best Expo West so far! According to New Hope Media, the event grew 7.2 percent bringing together an inspired community of over 71,000 industry members, more than 2,700 exhibiting companies and 634 first-time exhibitors. And my feet and hips sure felt it!

Let’s talk about my favorite MEAL and SNACK finds from 2015 Expo West: 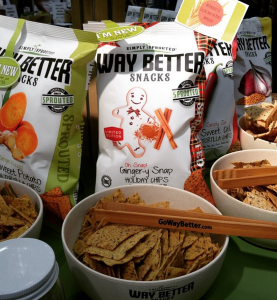 Way Better Snacks launched a few new gluten-free items. They launched a ginger sweet potato (very ginger-y), and a Ginger-y Snap limited edition holiday flavor. This new ginger snap chip is de-licious! I can’t wait till these come out. I hope they are met with the same enthusiasm as their seasonal punkin’ cranberry flavor for fall! 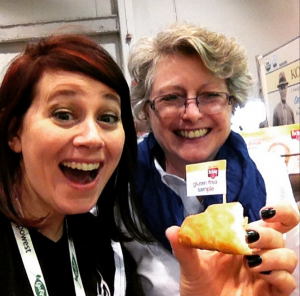 Now I know that many of you have hesitations about wheat starch. They’ve been using gluten-free CODEX wheat starch in Europe for years – and we all know how advanced Europe is compared to the states for gluten-free food. Schar has always been an innovator in the gluten-free space – probably because they come from Europe and have been dealing with celiac for longer than we have here in the US. This croissant is just like the real thing! It’s made with eggs and butter – so I can’t have these regularly. But if I could, I would. Who here wouldn’t want a real croissant? I know many of you have gluten-free bakeries that produce croissants without wheat starch, but these are the first mass-market croissant of its kind here. Codex wheat starch has been scientifically proven to be less than 20ppm – the celiac standard. Look for these in a freezer near you this year!

Artisan Bistro launched several new lines at Expo West 2015 – including a breakfast bowl and seafood bowls (like Italian-Style Shrimp and Penne)! These organic frozen meals are delicious, although many of them contain cheese and egg. I’ve written about Artisan Bistro before and really believe in this company and what they’re doing – safe, organic, gluten-free frozen meals that you can easy take to work, or make on a late night. They’re already organic and non-GMO, and these new seafood products are all made with MSC certified sustainable seafood. Look for great things from Artisan Bistro with these new lines! 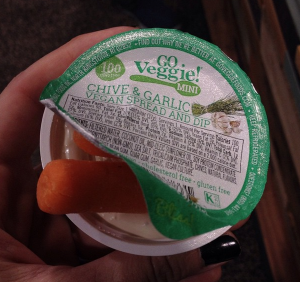 I haven’t used veggie dip in years, since most of them contain dairy and a bunch of other things I don’t care to eat. I really enjoyed these 100 calorie packs of chive and garlic vegan spread and dip from Go Veggie!. They are perfect for lunches and pair great with some baby carrots or a small package of crackers! 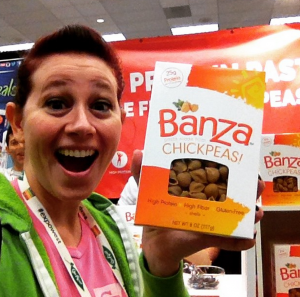 First lentils, then beans, now chickpeas. We’re embracing alternative pastas now more than ever. Banza has made pasta with a similar texture to wheat using chickpeas. They are also high-fiber and high-protein – what you’re often lacking with gluten-free pasta. 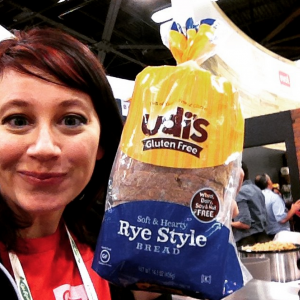 I didn’t get to try this, but Udi’s is launching a new larger package of bread, and launching a new flavor – RYE STYLE gluten-free bread (also dairy, soy, and nut free – contains eggs). I know people were really excited about this when I posted about it on Instagram.

Rudi’s launched a line of frozen garlic bread and frozen cheesy bread! I know a lot of you were excited about these photos on Instagram!

Boulder Organic! is a line of fresh soups that are certified gluten-free and organic. They have a few that are vegan, including their Green Chili Corn Chowder that was awesome.

Bearded Brothers launched their savory line of bars including a Coconut Curry bar that is delicious. The flavor is subtle but really innovative for a bar line. Their bars are organic, non-GMO, vegan, gluten-free, and soy-free.

Canyon Gluten Free Bakehouse launched a line of Everything Bagels that are the most like the ones I used to have years ago that I’ve found so far. There are real chunks of garlic, onion, sesame seeds, and poppy seeds on top. These are bursting with flavor – that “omg I need a piece of gum” right now flavor. Love it. (Disclosure, I was paid to work their booth at Expo West, but this does not affect my unhealthy relationship with gluten-free bagels). 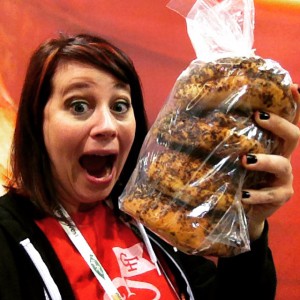 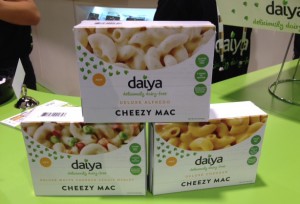 Daiya launched a line of shelf-stable (aka in your cabinet – you don’t have to find room in your freezer) of gluten-free dairy-free vegan mac & cheese called “cheezy mac.” I thought they were fantastic – although if you don’t like the taste of Daiya cheese, you won’t like these. The second I ate it, I could tell it was made with their cheese. I really like the taste of their dairy-free cheese, so I am excited about these. 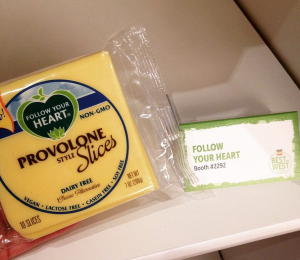 Follow Your Heart has been really kicking their cheese game up a notch. They highlighted their new provolone cheese in the press room (although note, these need to be refrigerated, not shelf stable), but they have several new ones out. I’ve been making pizza with some Garden Herb cheese they sent me, and making grilled cheese with their new American cheese slices (yes, just like the ones from Kraft). I never really put Follow Your Heart top on my list of vegan cheeses, but I’m really digging what they’re putting out there this year. Also, be on the look-out for new vegan, gluten-free bread from them soon.

Glutino launched the Salted Caramel Covered Pretzels of your dreams a few weeks before Expo West came out. At the Austin GFFAFest, people went bonkers over them! Although these are quite sweet, I think they’d probably be more viewed as a snack than a dessert. Salty and sweet – such a great combo. Bad news? They have dairy in them. 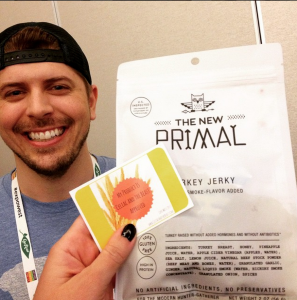 I got the nickname “Meat Stick” because I always have jerky with me at all times. I often carry around several “Real Sticks” from Vermont Smoke and Cure. I’m sure this just delights my vegan friends, but I often need sustainable protein that’s easy to carry around. The New Primal has a line of jerky out, but just launched this awesome new turkey jerky that is certified gluten-free, paleo, and has less sugar and less crap than some of the other jerkys out there. I can’t wait to find this on a shelf near me. Bonus – my cat loves it. 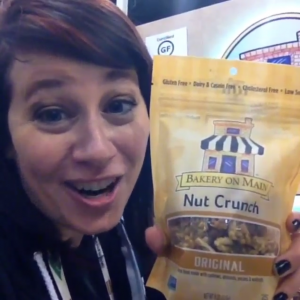 I’m totally addicted to Bakery on Main’s Nut Crunch. This combines gluten-free oats and nuts (including walnuts and cashews – my two favorite nuts) and varying flavor profiles (they have peppermint chocolate, blueberry, and more). I can’t get enough of these and already ate through all of my samples. These are perfect for traveling. 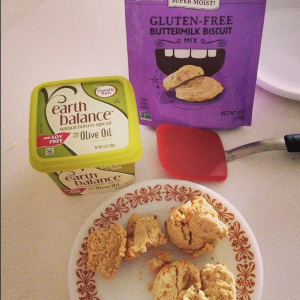 I didn’t try any of these at the show, but I came home and baked them one morning. Eat Pastry is known for their line of vegan (and sometimes gluten-free) freezer cookie dough. However, they made a killer vegan gluten-free drop biscuit mix! These are perfect for breakfast with some Earth Balance and jam! 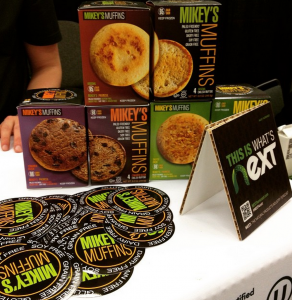 Mikey’s Muffins – besides being run by a cute dude who is from my own state – are awesome paleo and certified gluten-free english muffins. They’re also soy-free too! Mikey’s Muffins got a whole lot of press at Expo West, so look for these on shelves near you soon. I’m hoping that they get a ton of distribution for these!

Lundberg Farms came out with Thin Stackers – a thinner, flatter version of their rice cakes that make it a WHOLE lot easier to spread jelly or peanut butter on them early in the morning before coffee. They included these in the press room bag, which is great, because I’m not sure I would have gone out of my way to check out rice cakes at Expo West. Love these, and already bought a few boxes – a sign of a Expo West success!

Want to win products and coupons from the show floor? Celiac and the Beast wants to make you feel like you walked the Expo West show floor along with her! Just follow the instructions in this Rafflecopter for a chance to win!