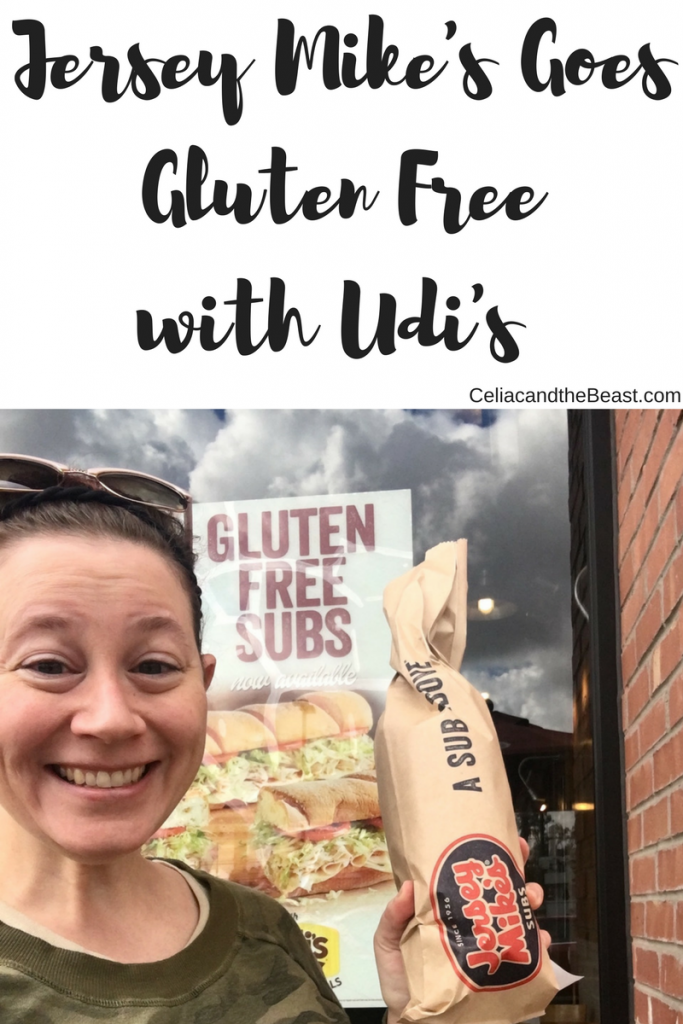 Over the past few years, several major nationwide fast casual chains have introduced gluten-free items. Subway was testing gluten-free sub bread in the pacific northwest. I still haven’t seen it. Papa John’s introduced an ancient grains gluten-free pizza that isn’t even celiac safe. So when I heard that Jersey Mike’s was launching gluten-free subs nationwide, I was surprised and a little hesitant.

I never really look through the flyers that come every Wednesday to my house. They are full of ads for Burger Kind, local chicken finger joints that seem to be popping up like teenage pimples everywhere in Phoenix. I never look. But this time, I did. And this time, I saw the Jersey Mike’s ad that featured the Udi’s gluten-free sub bread. Okay, maybe it was a sign. I needed to try it for myself. 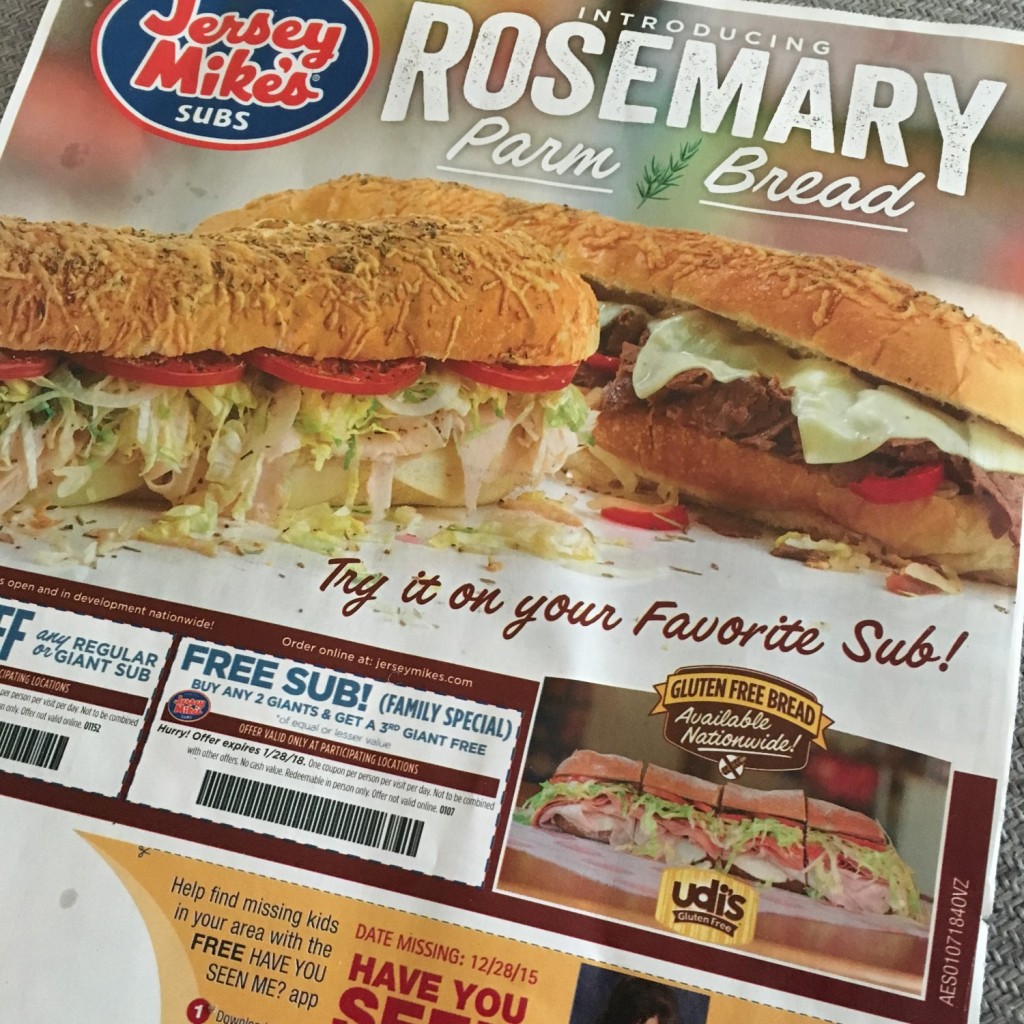 Thankfully, I have a Nima Sensor, so I feel like I can stay safe, even when it’s in a sketchy situation. I was going to go in, not be a crazy loon and ask a trillion procedural questions. I was just going to go in, say that I had an allergy and ask them for a gluten-free sub. I had heard on Instagram that they had proper procedures and protocols in place and I wanted to test it out. 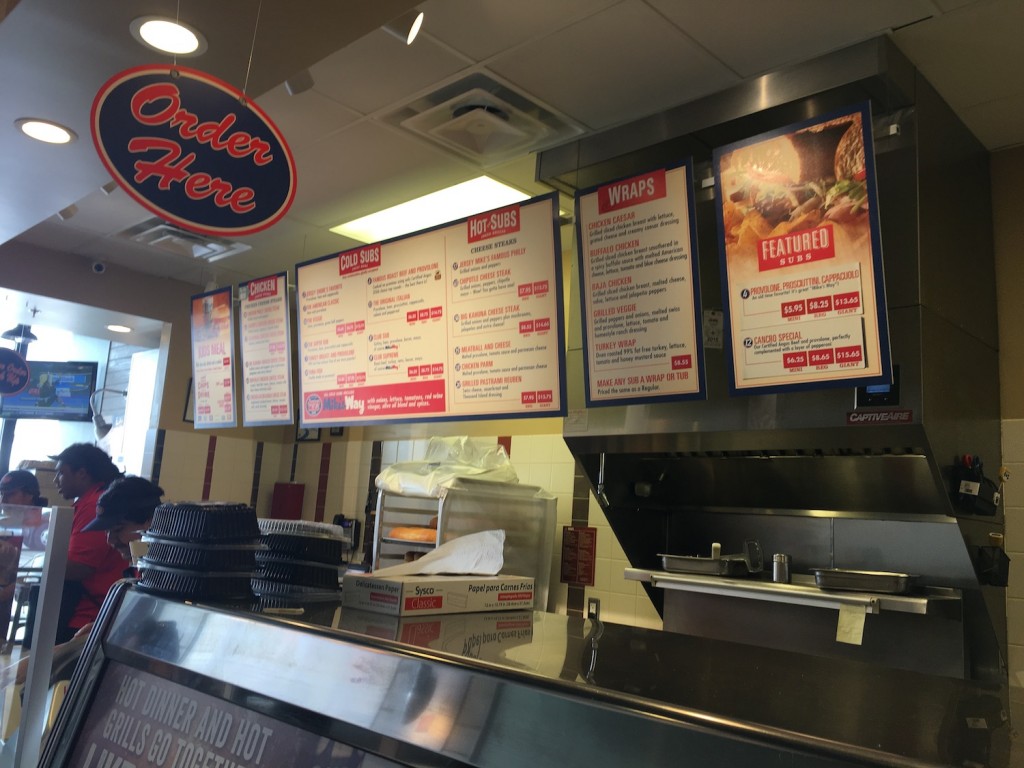 It went beyond my expectations. The women talked to me and told me I had two options – this massive giant sub that seemed like it could feed three people, and a regular size one, smaller than the typical Subway style sub, made for one. I got the smaller one. She had already changed her gloves, as she held up the two sizes that were wrapped in plastic and sealed. Once I made my size decision she went to the back and got a new board, a new knife, and a new spreader. 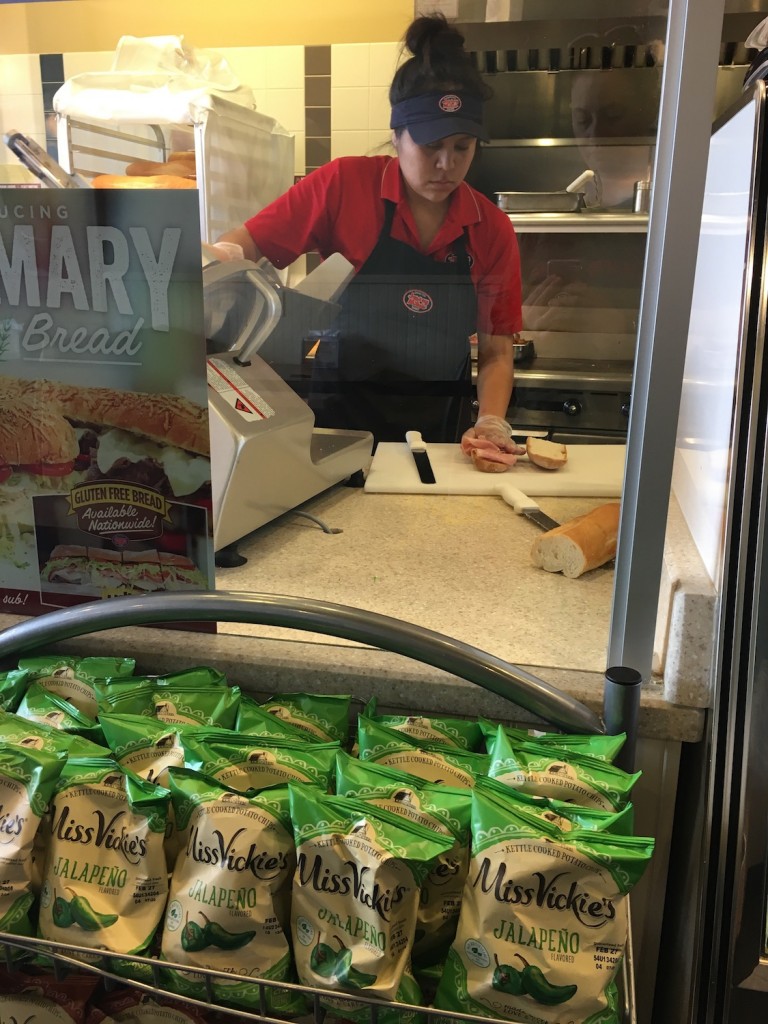 I got the club, without cheese. From the beginning to the end, everyone changed their gloves and used the new board and knife, spreader, etc. She even got mayo from the back so they didn’t use the same spreader. Every employee knew it was gluten-free and that they had to be extra careful. At the store I told them that I hadn’t had a sub at a store like this in like 9 or 10 years. They all just said “wow” and were overjoyed that they could make me a safe sandwich. 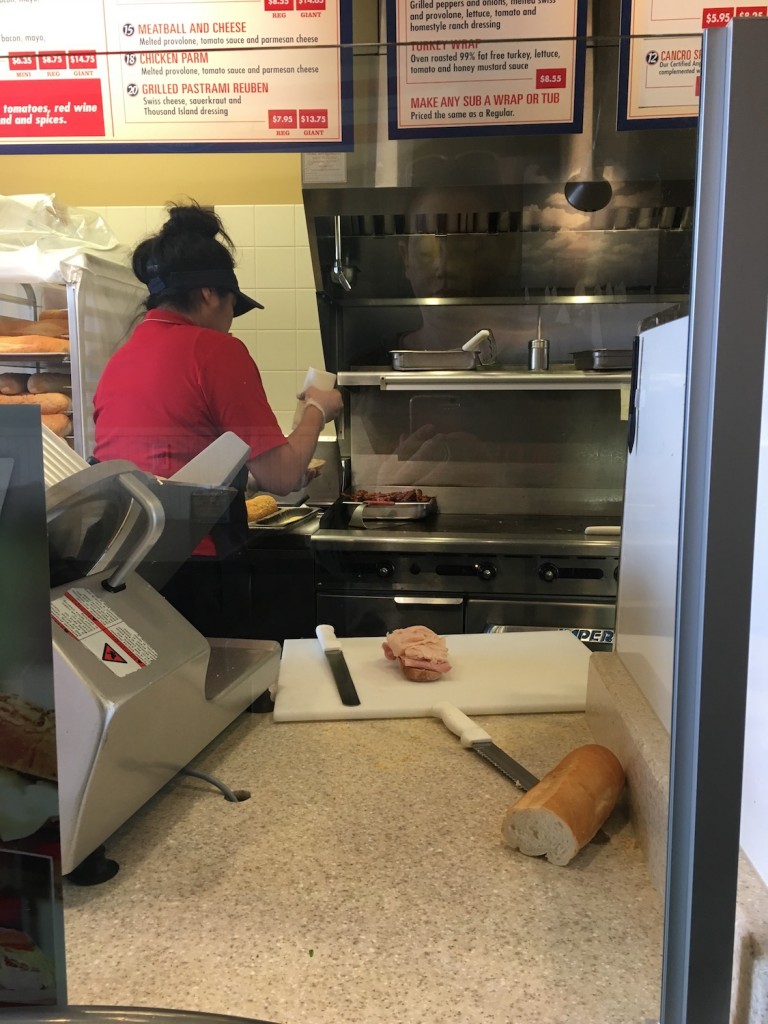 But was the Jersey Mike’s gluten free sub really safe? I used Nima Sensor, as a tool in my gluten-free toolkit, to find out. While the Nima cannot guarantee that everything is 100% safe, since it takes less than a crumb to make things unsafe – it’s another tool that I can use, along with a diligent eye. An eye that saw trained employees making me an awesomely-safe sandwich. 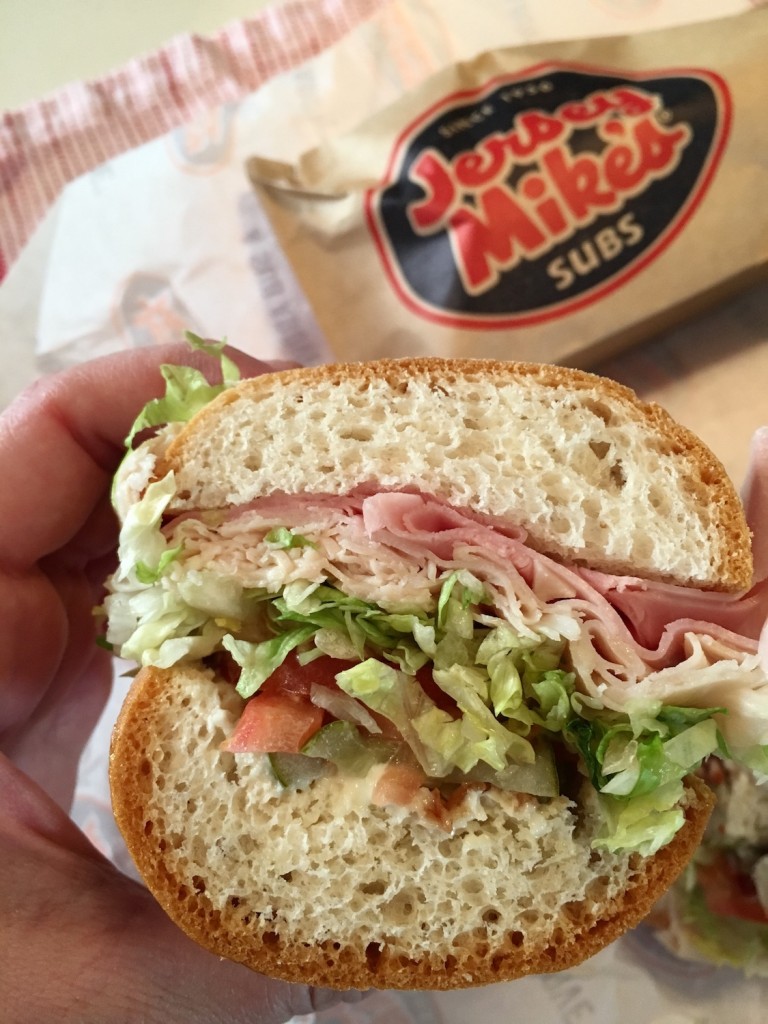 This Jersey Mike’s gluten free sub sandwich tested celiac safe. I wish that the bread could be toasted. I wish they had dairy-free cheese. I wish that I was 30 lbs less and a bikini model, but we can’t have what we want. What I did get, however, was an awesome sandwich that was made at a regular sub shop. One that regular people go to. A sub shop that is nationwide. That’s pretty incredible. 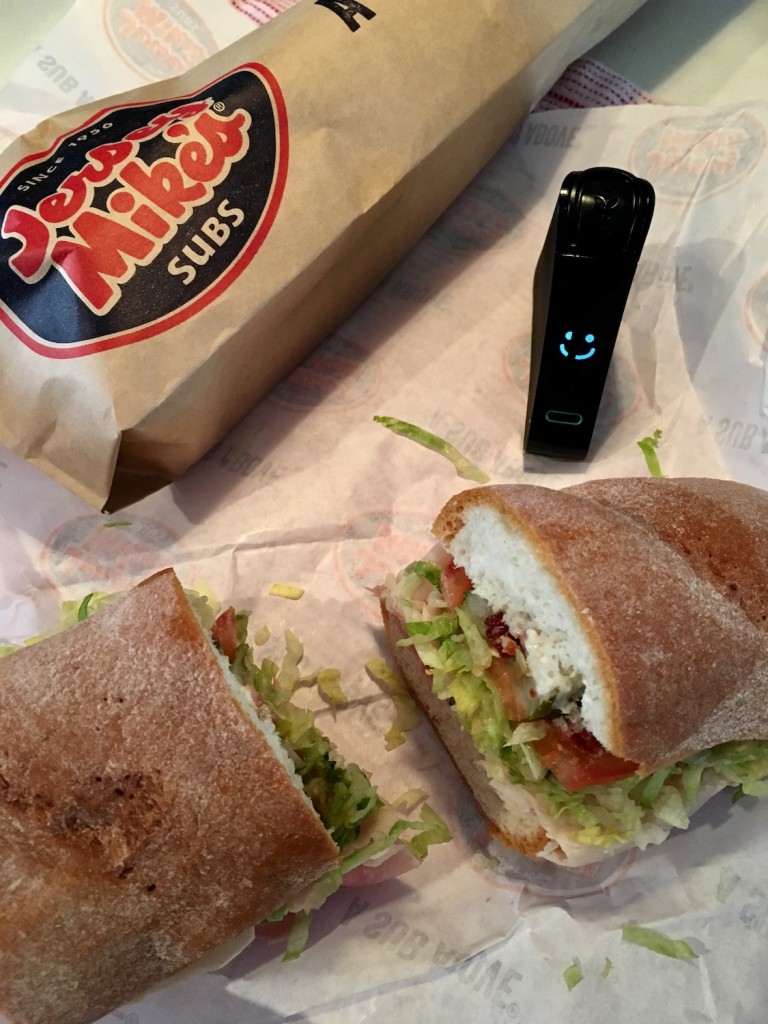 Jersey Mike’s gluten free sub is one that I will definitely eat again. Udi’s gluten free bread was fresh – without holes – and most importantly, safe.