This is the second post in the My Hysterectomy Story feature. To read the first story about why I’m having a hysterectomy, read about it on CeliacandtheBeast.com. 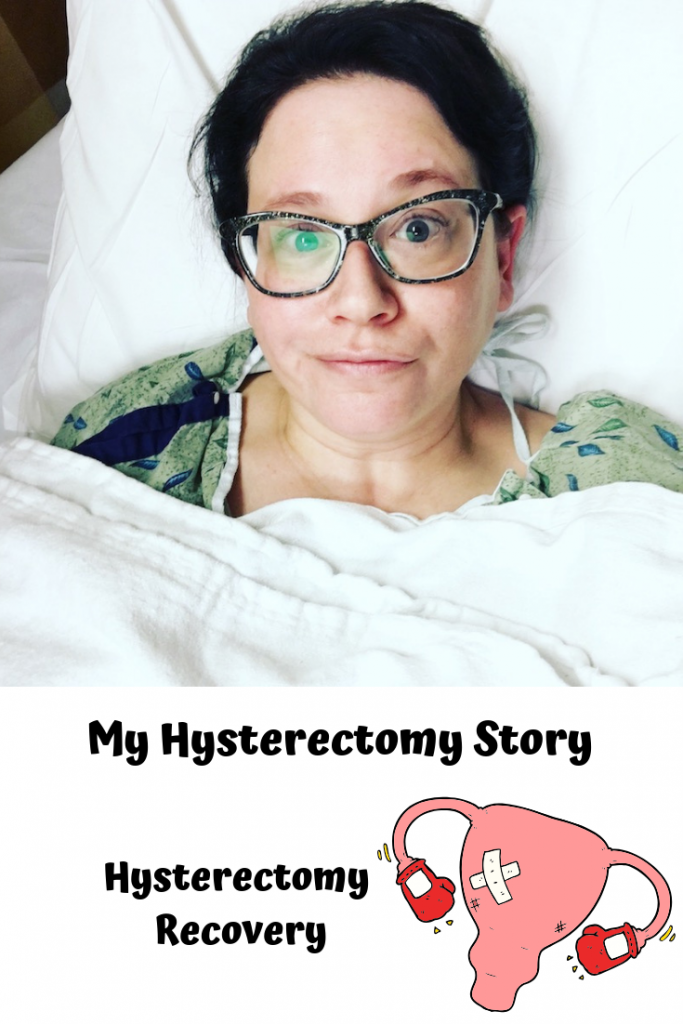 Heading into this hysterectomy surgery, I thought I had it all under control. I had known about my hysterectomy surgery for months. I had been stockpiling bone broth and crackers. I had prepared my hospital overnight bag weeks in advance. Everything had been paid for and I had my pre-surgical blood tests done. But, coming into the hospital that morning, I felt totally unprepared for a night away from home. I travel many many weekends a year, and I’ve stayed in strange hotels. But a hospital? Never. Every surgery I’ve had has been outpatient. I’ve never been hooked up to an IV for longer than 10 hours (pre-surgery, long surgery, post-surgery recovery), and I’ve never had a catheter in for longer than 4-5 hours. I’ve never dealt with pain management in the form of IVs – I’ve always just left with an opioid pain killer, anti-nausea medication, and an antibiotic in pill form. I’ve never had doctors ask to feed me – and maybe that one I was most worried about.

I even told my doctor in advance, and also warned my mother (for the one millionth time), “tell them I don’t want any of their food, and stop them if they try to feed me anything.” While I’m sure normal people complain about hospital food, I doubt many are truly fearful of like I am.

Everything before the surgery went fine, except the nurse telling me that I had terrible veins (gee, no shit lady, I told you that) and having a really hard time getting in my IV. I met with my surgeon and went over the game plan for the 10th time. My mom even got to spend some quality time with her and informed her about my massive family history of endometriosis. I then met with the surgical assistant who was so charming, and the anesthesiologist who was a real ball-buster, but pretty damn funny. I told him my history with pain meds, anesthesia and post-operative nausea. We talked about my billion other surgeries and what medicine I react best with. It was an awesome experience to chat with a team of professionals that really got it and wanted to work with me, instead of work ON me. 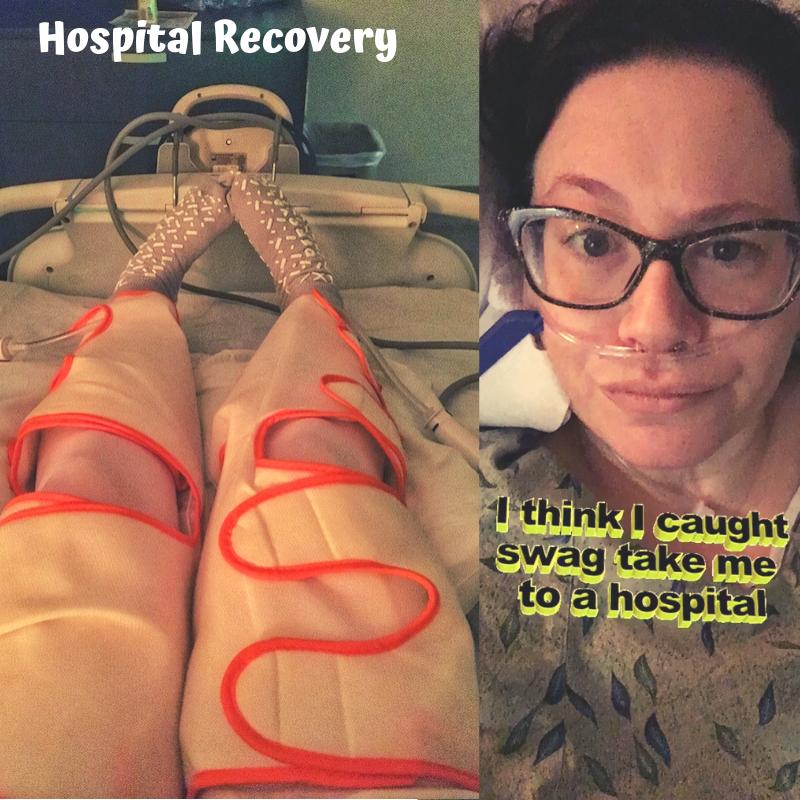 I don’t remember much after that, other than all three of them were above me, along with my mom, and the anesthesiologist told me that it was time. I quickly said goodbye to my mom, and then, hours later, I was in the hospital room. Ahhh, the beauty of high-quality IV drugs.

The first day after the surgery (around 12 noon on), was pretty uneventful. I really only remember waking up a few hours after I was put into my hospital room. I was on IV pain killers, IV phenergan (my favorite drug of all time), IV zofran, and an IV antibiotic. The nurses were coming in pretty regularly to check my urine, IVs, and pain levels. After a while, I was able to eat crackers, and have a little water, and ice chips. My mom just hung out in my room, watching TV, reading magazines and laughing at my drug-induced questions. By the end of the first day, I was really lucid and having full conversations. The pain was okay – it was mostly just uncomfortable. Thankfully, this surgery, my C02 pain was so much less than my first laparoscopic surgery. The nausea, however, was another thing. I was so thankful for the combo of Phenergan and Zofran – my two best surgical friends. Also, they let me have a heating pad, and it was so awesome. I also had these rad things on my legs to keep me from getting blood clots, since I wasn’t going to try to walk until the next morning. While I was in and out of sleep, I was only able to sleep for a few hours straight when I asked for Dilaudid. I really wanted to watch Netflix, but everything I wanted to watch involved cooking or baking competitions and they made me hungry. I ended up watching a lot of CNN. 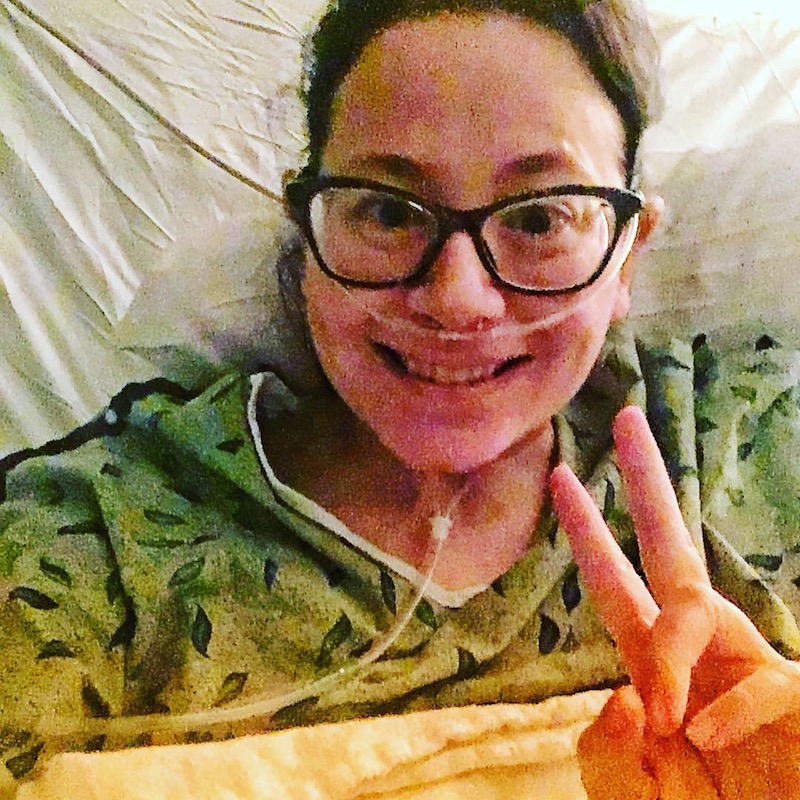 Non-GFBF came to check on me for a little bit, and gave my mom some company (since I remember very little of him being there). He remembers me bothering the nurse every few minutes about emptying my pee bag. He, however, already knew that I was a problem patient – he’s been through three major surgeries, two endoscopies and two colonoscopies with me. A few hours later, I kicked my mom out. I felt bad that she had spent all day with me, and I would have hated if she had to sleep in a chair! I knew that I would be bored out of my skull without her, but I would have had to get her a really big Christmas present if I made her spend the night!

The next day, I was feeling great, and was a champion walker-around-the-hospital patient. They had no problem with discharging me early, all I had to do was pee on my own. Ha, I’ll show YOU doctor, I’ve been a champion pee’r since childhood! I passed the pee (and fart – thank you very much) test, so I was allowed to start packing my things up to go. Before I left, my doctor stopped by before she went to the office for the day and told me (this time, while I was coherent) about my surgery. They successfully removed my uterus (which was boggy – a term for the feeling of the uterus when it has adenomyosis), endometrial adhesions throughout my pelvis, two fallopian tubes, and one ovary. The ovary was in bad shape – almost strangled by my own body. Impressive. 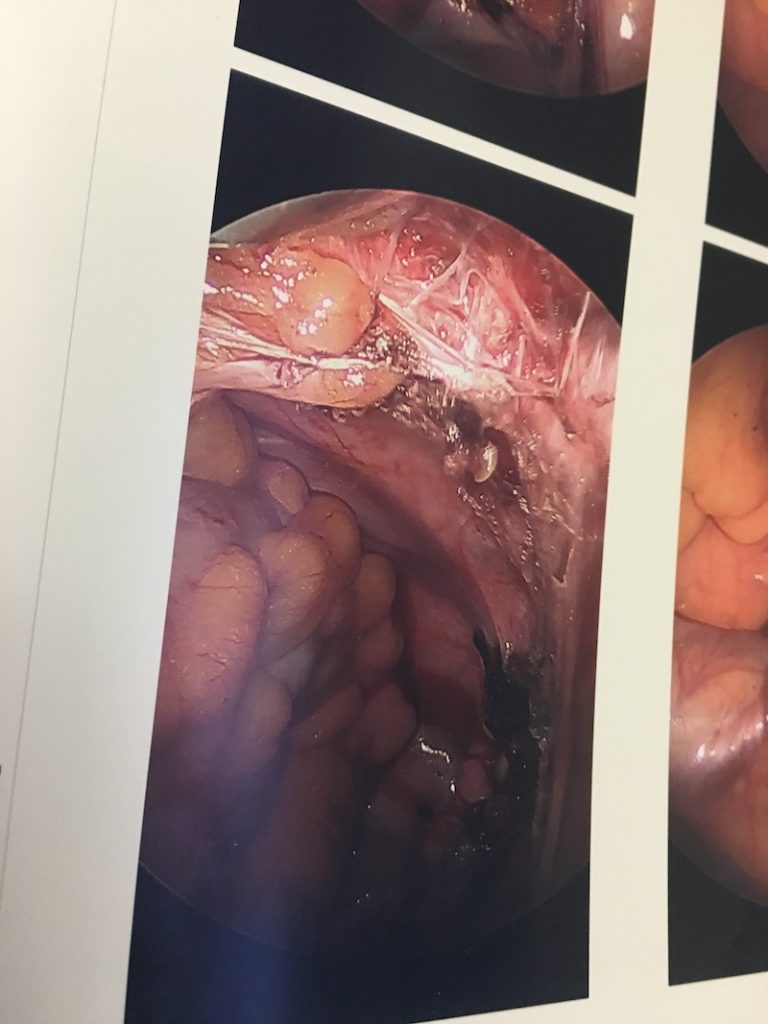 Sorry not sorry if you’re not fascinated by the human body and how gross it can be.

Don’t worry, I’ll be talking more in-depth about gluten-free hospital food and recovery food in a future post. Even though I couldn’t eat much, I was thankful that I thought in advance about hospital food. I was offered food over and over and over again, without anyone talking about allergies or gluten free. PS they no longer offer allergy bands at my hospital. Every other surgery I had a big red arm band that told them that I was allergic to penicillin, percoset and that I had celiac. The nurse told me that they got rid of that system and only offered me a tag on my band that says “allergy,” and assured me that the nurses would look at my chart before they offered me anything. BULLSHIT.  They didn’t. Even through the pain killers, I had to keep my wits about me before they tried giving me crackers, even though I had my Schar crackers within arms’ reach. I can’t wait to chat about this problem in our community! 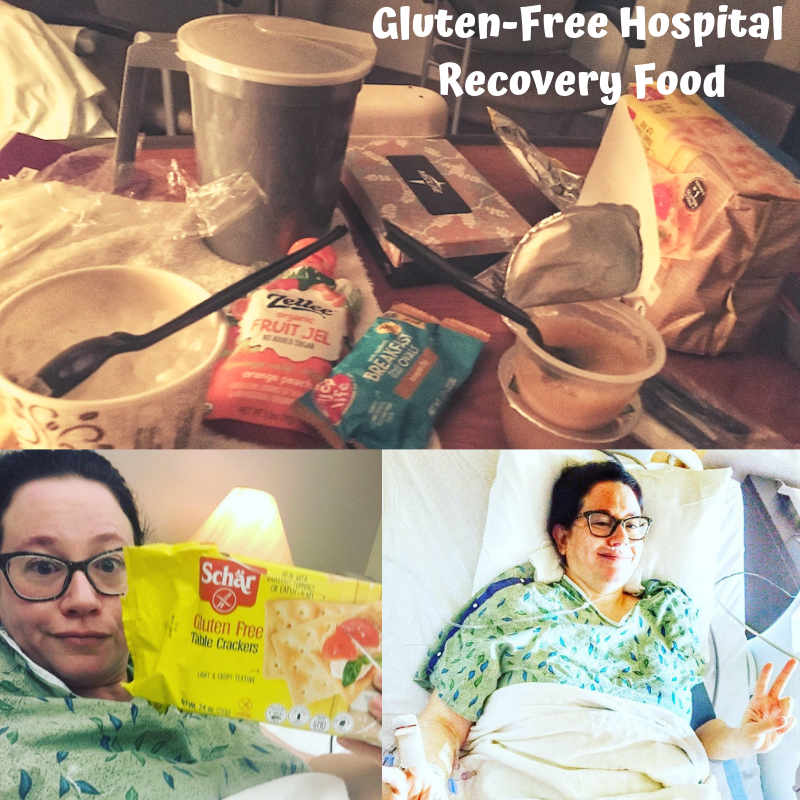 FYI the bottom right photo was a photo my mom took after my Phenergan kicked in and I told her how much I loved that drug. Apparently this is how I look on a lot of Phenergan.